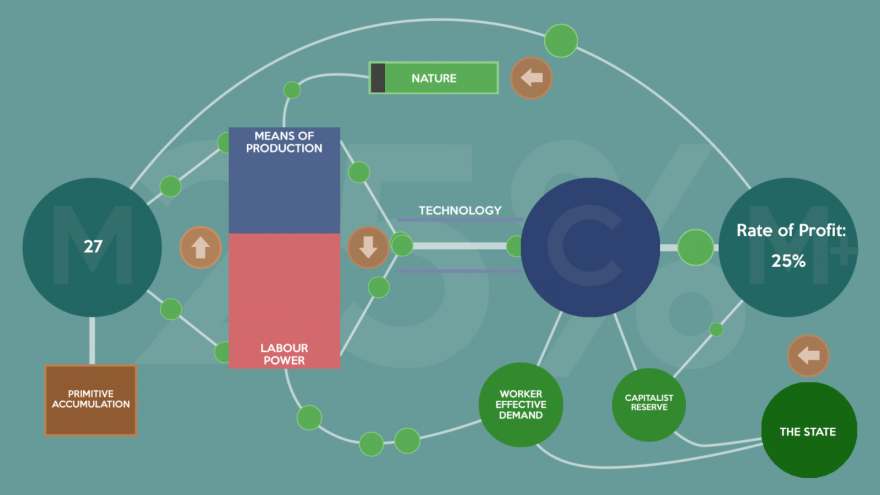 Colonialism, public debt, expropriation. These are what Karl Marx called primitive forms of accumulation; the spark that ignited the flame of capitalism. In David Cribb’s Crisis Theory, you are that flame. You are the spirit of capitalism.

Capitalism, as outlined by Marx, is defined by the accumulation of capital—that is, pursuing profit, and at whatever cost necessary. Cribb’s new game is a representation of that process. First, there is the initial investment of capital into labor power or a means of production. Combined with technology, a commodity is created; a commodity that must be purchased by workers or capitalists if a profit is to be rendered. Any profit is then pumped back into the initial capital pool to continue the process.

As capitalism, you’ve got one goal—profit. It should be simple, no? Here’s a spoiler. It’s not. As Cribb pointed out, capitalist theory is filled with contradictions. And those contradictions are the core of crises facing you, capitalism. There are five buttons to push in Crisis Theory—just five buttons to prevent your central process from falling into crises, and giving the people the power to revolutionize the system.

expertly demonstrates the crisis in Marx’s theory of accumulation

With these buttons, you’ll manage how your means of production and labor power align. When you’ve depleted your resources, you’ll push a button to harvest more. Another button encourages the State to provide a boost to workers or the capitalist reserve. And if those aren’t working, you’ll look back to primitive accumulation—colonialism, public debt, and expropriation.

The speed at which the process runs increases as the game continues. Things move quite slow, at first—though, the rate at which it speeds up quickly becomes overwhelming, and you’ll have to start making choices. But even then, you can’t win this game. You’ll eventually fall into one of four crises: a natural crisis caused by exploiting natural resources, a profit-squeeze crisis if your workers become too powerful, a falling rate crisis for spending too much on means of production, or an effective demand crisis when your workers can’t afford your commodities.

Crisis Theory expertly demonstrates the crisis in Marx’s theory of accumulation. It’s a topic many books have covered, though it seems particularly suited for a videogame. “The increasing speed and volume of capital circulation sort of acts as an in-built difficulty curve,” Cribb said. Even for folks familiar with Marx and his writing, experiencing the chaos of the process may be pretty alarming.

However, Cribb’s game isn’t exactly for those entrenched in Marxist theory. “I’m sure [scholar] Andrew Kliman would disagree with the role I gave the tendency of the falling rate of profit in Crisis Theory,” Cribb told me. However, he’s not convinced Crisis Theory will persuade a general audience to become Marxists, either. Cribb is more interested in drawing in “leftists who haven’t really dived into theory.”

“Hopefully the game can provide a general outline of some of the key contradictions in capitalism, and ideally encourage people to go back to the source material for a more detailed and more nuanced understanding,” he added.

As Crisis Theory continues—10 minutes, if you’re lucky—you may find yourself clicking helplessly on the primitive accumulation button for any relief from the madness. It’s the button that functions as the starting point, but also as a way to increase the amount of capital in circulation, though it comes at a cost. Namely, imperialism. Or colonialism, or public debt, or expropriation. I found myself clicking tirelessly through these options, aiming to land on the least evil sounding one available.

But that’s not really the spirit of capitalism, is it?

Pay what you want for Crisis Theory, which is available on itch.io.