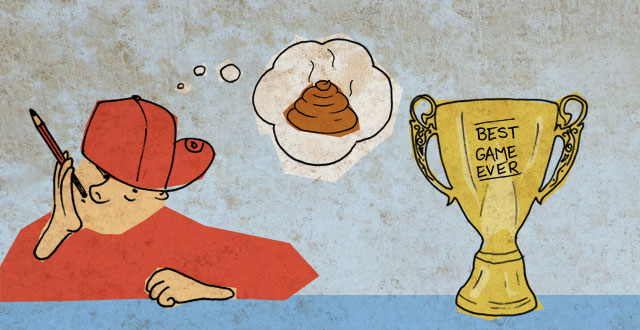 I’ve never been reviewed. I’ve received angry fan letters now and again, but I’ve never had the distinct privilege (or dishonor) of having my work evaluated by a professional. That feeling of reading another man or woman’s words; their reflections, critiques, and assumptions about what I’ve poured my heart into—that distinct feeling of being judged—has thus far eluded me.

I’m about 15 minutes into Game Dev Story, the meta-game to end all meta-games. It is a videogame about making videogames. (I await the development of a Game Dev Story Story with Inception-level abstraction and rabbit-holery.) I’ve completed a couple of contract projects, but now I’m ready to ship my first big title. It’s a “historical shooter”—a nonexistent genre of my own fabrication. Surely something fans have been clamoring for.

The title ships—without any bugs, to boot. Then, before it hits store shelves, Game Dev Story offers me judgment in the form of four nameless critics. “C’mon,” one review says. “Why do they make stuff like this?” another reads. I’m sitting on the subway on a Friday night and I am crushed.

There was a point in my life where I wrote about music as a “critic.” I pored over volumes of hip-hop records, dissecting every note and sample, pulling apart each lyric. My tongue was scathing, as many young critics’ often are; and frankly, I’m embarrassed at how little sense my writing made. My college roommate, in a recent review of the reviews of Arcade Fire’s latest record, identified what I hated most about my early critical self:

The most prominent paid professionals will not give me reasons why they like these songs as compositions, productions, performances—anything other than as signifiers of various contexts that sit well with them. No explanation of mechanics, how the songs surprise in new ways, but delight in the old ones. Maybe that makes me the last boy scout—wanting to talk about these things, to geek out about the different kinds of knots the band had to tie, so to speak.

As a music reviewer, I didn’t understand process. I wrote about what I did not know.

Which brings me back to Game Dev Story. The entire game hinges on this plot piece: the review. They are that crucible that you desire, yet despise. And you hate them, those four critics—the same every time—who render their verdict.

That is the pain, when the reviews come in again, barely passing a 5. You are begging your smartphone for pity; entreating this piece of code, this machine, to show a little bit of mercy. Especially the smarmy one with the cap. That dude.

You hate them because they do not know.

They don’t realize when you’ve spent all of your capital hiring a sound designer that fails to deliver; you’ve lost your creativity to a blackout; your fans are abandoning you for a long delay in releases; you discover that radio ads will no longer boost your popularity; and you’re on the heels of winning “Worst Game” at the award show. That is the state of mind that you are in when you’re shipping game No. 6—a guaranteed “hit.” It is commercially successful, but garners only a sigh from that bastardly cadre.

The brute-force reading of Game Dev Story will go something like this: “It seems to mimic the inner life of a game studio,” or “It makes you appreciate what it takes to make games.” These are not untrue statements, but hardly strike at the heart of what makes the game sing.

Game Dev Story is about channeling the weight of a single feeling—expectation—into a particular moment. It makes the fecklessness of critiques very, very real by connecting what you’ve done with how you’re judged. So now you know.