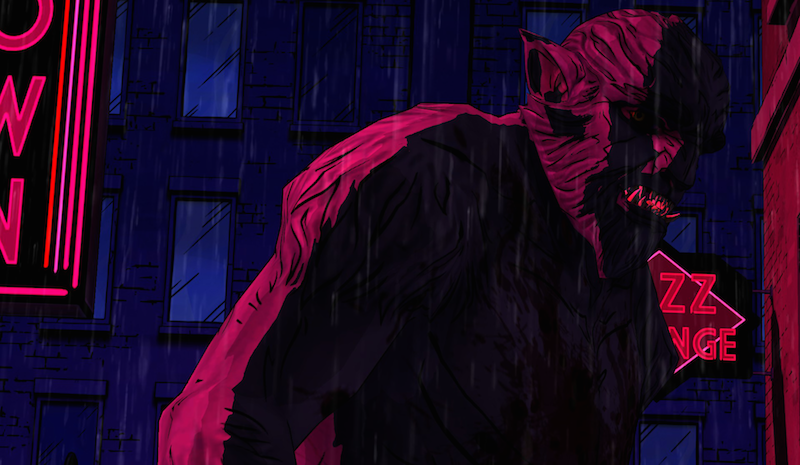 Title:
The Wolf Among Us Episode 3: A Crooked Mile

If nothing else, Telltale’s third episode in the serialized fairytale noir A Crooked Mile certainly knows what it’s about. The episode kicks off at a murdered troll’s funeral in an abandoned construction yard under Buckingham Bridge and ends with a cathartically bloody mess in the back alley behind a strip club. The Wolf Among Us is grit and grief: players must prove whether the Big Bad Wolf—now Bigby Wolf—actually gives a shit about the people he’s been asked to protect. But it’s here halfway into the serialized narrative that the Fables are brought into a sharper focus. The Wolf Among Us is about nostalgia and dead prostitutes, sure, but both of these are framing for a more moving portrait of grief and what it means to mourn the lost.

The story kicks off immediately in the wake of Bigby’s shocking revelation at the end of Smoke and Mirrors. Worried for Snow White’s safety, he scrambles to a hastily prepared funeral to warn her in the middle of her eulogy, and it’s here the game prompts players for their first significant choice: should Bigby honor Lily’s memory and let Snow finish, or will he interrupt the ceremony for Snow’s sake? The funereal table in this scene, laid out with trollish paraphernalia from the old world, feels like a monument to something greater, like the Fables are mourning not only Lily but the elegant simplicity of their old lives. Ichabod Crane’s opening lament echoes this: “Our stories used to be so simple. We had a beginning, a middle and an end. But ever since we moved to this awful city, everything’s gotten so confused.”

The clarity of violence clears any confusion Bigby and friends share. The funeral ends with three bangs, no whimper, and a sudden fade to black. Snow White asks Bigby if he enjoys the violence because it is the only time when things feel like they used to “back then.” It’s these character moments, cut in the wake or preface of extreme violence, that land the strongest throughout The Wolf Among Us. As it turns out, the Big Bad Wolf isn’t a great detective: the investigation scenes tend to lag until they reveal the small, gem-like interactions with Fabletown’s intriguing locals. A simple search grows tense when Jack (of the Be-Nimble and Be-Quick variety) shows up to loot the scene, and a down-to-earth Frog Prince steals the show as he cleans Tweedle Dum and Dee’s office.

No matter how Bigby’s investigation is cut, he will always visit the Trip Trap Bar for a half-lucid conversation with the grieving troll Holly. Prone on an old cot, she holds a mirror to Bigby’s own alienation. “Do you even give a shit about us? The strays?” she asks. Even in the displaced community of Fabletown, there are those on the margins who are being left to die. The harshness of the old world where Fables ate each others’ hearts has been exchanged for the humdrum of backlogged work orders and unpaid glamour taxes. Here and now, without the crystal clarity of a tidy happily ever after, the Fables turn to secret lusts and vicious thrills to keep themselves going, and Bigby is no exception.

After displaying Holly grieving her loss—not just her sister but her last link to her old life and better times back in the Homelands—A Crooked Mile powers through an arresting final act. An old witch howls if Bigby burns her sacred tree, but it’s her (slightly on the nose) aside that smolders long afterward: “You think I like being the old woman in these stories? The men are heroes, the women are whores, and the old hags like me get to watch everyone they love die.” The bitterness here is of a piece with everything that’s come before: we sustain loss, we suffer, we move on. The Little Mermaid gets her legs only to spread them onstage for everyone to see; the Frog Prince trades his swamp for a crown, the crown for a mop.

We sustain loss, we suffer, we move on.

Bigby’s investigation culminates in a vicious blood-soaked showdown in a seedy back alley. The scene is striking: lit in a palate of lurid neon, the dialog crackles and the stakes are high. Throats are ripped out, bones snap, and The Wolf Among Us proves that it still has more than enough bite to back up its bark.