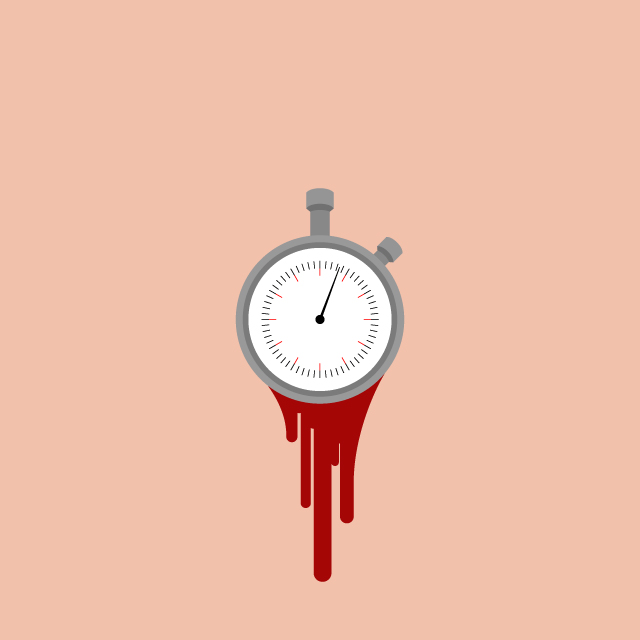 King Carrion is a U-shaped canyon. Meat Boy starts atop the left-hand cliff, works his way down to the base, bunny-hops across platforms suspended over insta-death maggots to obtain a series of keys, and then climbs up the right-side cliff, where Bandage Girl awaits. Apart from several enemies and buzz saws, it is a relatively straightforward level. Thirty seconds. Max.

But I have a plan. If I could aim a jump from the starting point to land on one of the platforms in the middle of the pit, I would cut out half the level and shave entire seconds off my time. Seconds! It is a tricky jump, but not impossible.

A game should ideally give the player a sense of progression, of getting somewhere or achieving something even while it holds him back. Most crucially, the player should not feel as though he is wasting his real time. Yet, in many games, time effectively rewinds when the player dies; the minutes between the previous checkpoint and the player’s death are tossed aside. The real time that the player has invested into the game is shrugged off and forgotten.

How can Super Meat Boy justify consuming an hour of my time for a single level? Or, perhaps more importantly, how can I justify volunteering to spend an hour on a twenty-second level, when in any other game I would have given up long ago?

Progression in Super Meat Boy is not measured solely by the number of levels you complete, but also by how you complete them. Super Meat Boy is about perfection, about discovering and memorizing a precise path through the level down to the pixel and the millisecond. Just as the poet may spend hours finding the one word, so may the Super Meat Boy player spend hours finding the one path. I was not wasting my time on King Carrion, trying to aim my blind jump; I was writing first drafts.

Other games waste my time by holding me back until I pass a specific task. Super Meat Boy is not just about the task but the process, about the refinement as much as the eventual perfection. It is not about playing the “wrong” way until you discover the “right” way, but about playing one way until you think up an even better way.

The game’s style articulates this sense of constant progression and accomplishment. Blood splatters on the walls and blades as Meat Boy dashes across a level and, significantly, remains there on all subsequent attempts until the level is passed. By the time the player successfully runs a level, the walls, floor, and ceiling will be covered in a layer of blood. While Meat Boy may have to start a level over and over again, the player never goes back to the start.

My successful run of King Carrion is gloriously understated. I land the jump perfectly and bounce across the platforms with my little meaty feet barely touching the ground. My fingers move unnaturally as I jump the enemies and collect the keys. I climb past the buzz saws toward Bandage Girl without hesitation.

The replay shows all my early attempts running simultaneously. A mesmerizing swarm of Meat Boys leaps across the screen. Swathes miss the platform and splatter into the maggots below. More are devoured by the circling monster; a few miss a jump and are cut up—until the last Meat Boy, that of my successful run, is left dashing improbably toward Bandage Girl.

I have worked for an hour to create this sight, shedding the mistakes of my previous drafts as I go. But each ill-fated Meat Boy, each mistimed jump and buzz-saw victim, deserves to be here in the replay with me. Without each of them, my successful run would not exist. By collapsing my attempts into one moment, Super Meat Boy depicts not time wasted on failed runs, but experience gained as I slowly perfected my craft.

But right at the end, I see, Meat Boy sticks to a wall when he doesn’t need to. If I manuever Meat Boy that little bit higher to miss that wall, I could shave milliseconds from my time. Milliseconds! After watching the replay a couple more times, I can see other places where my jumps were slow, my reactions laggy. My finger has been hovering over the button for the next level. Without a second thought, I instead press the “Replay Level” button and begin King Carrion all over again.