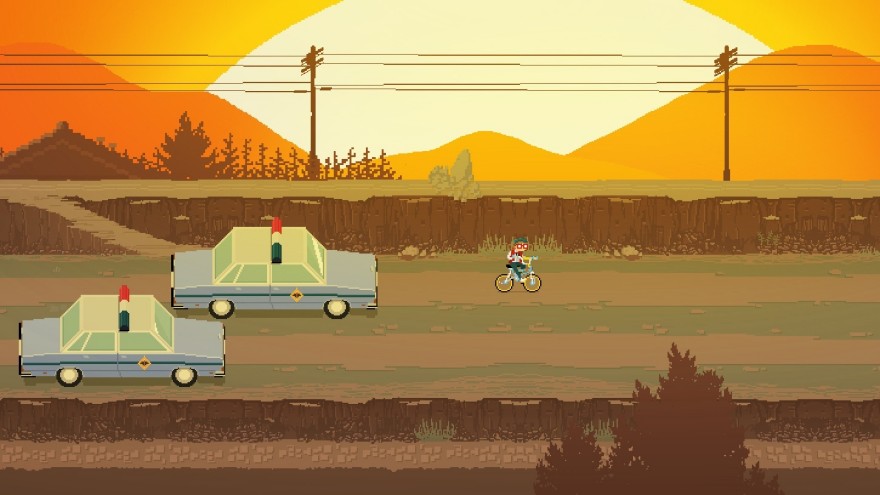 I have to start with a confession: the whole neon pixel art thing has ceased to work its magic on me. The luster has worn off. I’m seeing low-poly on the weekends.

I played through the Hyper Light Drifter alpha without really seeing what the game looked like, because it felt so familiar. That’s unfair, of course. Am I sorry?

I’m seeing low-poly on the weekends.

Well, I wasn’t. But then Crossing Souls came onto my radar. It’s a top-down RPG with, yes, a vivid pixel art style.

But it’s fair to describe this as a passion project. When I spoke to the development team—they collaborated on their answers—their first words were “The game is very influenced by our entire childhoods.”

That means the 80s (1986, to be specific), and that means synthpop and touchstones like The Goonies and He-Man and Zelda. “We all are guys who grew up in small towns,” the Crossing Souls team wrote. “We had beautiful childhoods and we love to remember them. We used a towel as a cape, a broomstick as a sword or had a hidden cabin in the town outskirts. That’s the kind of feeling we want to revive with this game.”

Accordingly, the five main characters are all kids: Chris, Charlie, Big Joe, Math, and Kevin. They’re doing what kids do over a long hot summer in California (not a dang thing) when they come across a mysterious artifact in the woods, an artifact that catches the attention of an insane former US general.

But being about kids does not necessarily mean Crossing Souls is for kids—certainly not in the pejorative sense. “The game is a tribute to our childhood but we don’t want it to be as simple as those kind of movies used to be,” they write. “Crossing Souls is a game about kids who are about to grow up.”

There’s a dark streak hiding behind the game’s colorful surface: that artifact, the DUAT stone, allows the kids to travel to the “death plane” and interact with the spirits of the dead. There’s more that the team didn’t want to reveal, too, preferring to leave it a surprise.

And in truth that’s what makes Crossing Souls such an enticing tribute to its influences. Whether it’s Stand By Me or the Brothers Grimm, the best kids’ entertainment has one foot in adulthood. The cursing in The Sandlot; the horrific violence in Watership Down; the religious allegory of The Chronicles of Narnia: they’re all for kids, per se, but recognize that children aren’t stupid. If you challenge them, if you push them a bit, they’ll get a lot more out of the work than if it’s all fart jokes and shoehorned pop songs.

“We would like to develop a funny and profound game, with a great plot that can make the player remember those times with a bit of nostalgia,” the team said. It’s as much an exercise in revitalizing their past as the player’s: by their own admission they “embrace cliches, but try to keep our own personality. We used cliches as a way to revive those childhood feelings.”

“We used cliches as a way to revive those childhood feelings.”

That’s the allure of the cliche, isn’t it? That’s the appeal of genre, of a certain camera angle, of a guitar tone, of a particular prose cadence. It provides a familiar pivot to ground you, a small entrance into the heart of a game or a movie or a song.

And so perhaps I’m wrong to step out on pixel art. There’s a brief shot in the Crossing Souls trailer of an arcade, and enshrined in one of the machines is, quite clearly, Hyper Light Drifter.

The team had a simple answer for this: “Our pixel art is just another way to get the players feeling that kind of nostalgia. Each artist modifies pixel art to his or her own style, or to the one they need in that moment to transmit what they want.”

There’s a kinship there between two very different games, a shared desire to rouse something real in the player: whether it’s an isolating alien world or a warm, rich ode to childhood, the ends may be disparate but the means, the pixelated, dayglo means, are the same.