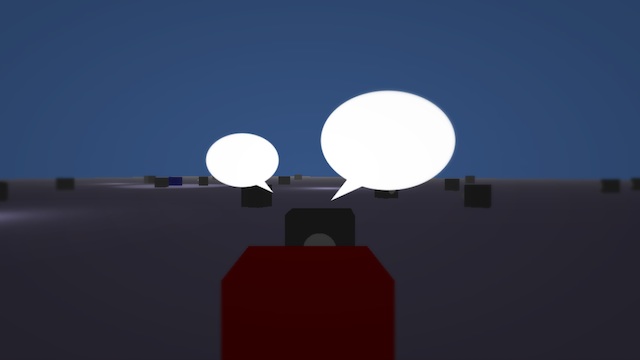 “Anxiety is the Dizziness of Freedom,” the theologian Søren Kierkegaard famously wrote in his philosophical work The Concept of Anxiety. What he meant was this: because we are autonomous beings, having the ability to think for ourselves, we are prone to worrying over the choices we make. You could say that once you start thinking about anxiety, you already have a problem.

It follows that the creator of Crush, a browser game that illustrates the overpowering effects of anxiety, is personally familiar with the disorder herself.

Created during Global Game Jam 2013, Crush is a short, abstract game about that dreadful situation that is forever the cause of fluttering hearts and sweaty palms: striking up a conversation with that special guy or gal you are infatuated with. The game shows this metaphorically. You control a scarlet cube, and the object is to reach your crush, the purple cube. A throng of gray cubes, who will buttonhole you in idle talk, stand in your way. It seems impossible to get there. At times, you will lose total control of your cube as it freaks out and runs away from the crowd.

“Wow, this is super-weird how nervous you get!”

Quite naturally, the creators were a little worried about oversimplifying the disorder. Cat Musgrove, a former animator at Vicarious Visions who thought up the idea for the game, is a cheery young woman who develops casual games from her sunny studio apartment in Albany, New York. She is actually very calm and collected on the phone. “I started having anxiety pop up in weird places,” she explains. “Waiting in line for things. Situations where i’m just waiting. You start to feel nervous, and then you feel nervous because you’re nervous. The idea was ‘Can we make those feelings?’”

She created Crush with her ex-boyfriend of three years Issam Khalil. (And, yes, they still work together.) He isn’t the guy the game is based on. The experience came right after they had broken up. “It was the first time I had been single in a really long time, and all of a sudden I remembered how stressful that situation can be,” she says. She was in the middle of a conversation with a friend when the guy she had a crush on showed up. “I couldn’t pay attention at all,” she says with a laugh. “Wow, this is super-weird how nervous you get!” Nothing ever happened with the guy. He had a girlfriend.

Cat has never been on anxiety medication, and isn’t sure if she has a bone-fide anxiety disorder. However, over the summer, she had a panic attack and Issam rushed her to the emergency room, where the doctor on duty told her she might be suffering from anxiety. “I don’t know if that counts as a diagnosis,” she tells me. However, she takes precautions, avoiding caffeine and exercising. She tried meditating for the first time last week, although admits it might have been a one time thing.

Was Cat nervous while making the game? “I was super anxious about presenting the game! But that’s probably normal.” However, she doesn’t believe she has alleviated her anxiety, and offers no insights on how to. Issam, who doesn’t have anxiety, tells me, “You just have to think of something else. From my point of view, she doesn’t have control of what is happening.” But he learned over the course of making Crush that it isn’t as easy as he thought. “You can’t just say, “‘Think of something else.’ That doesn’t work.”