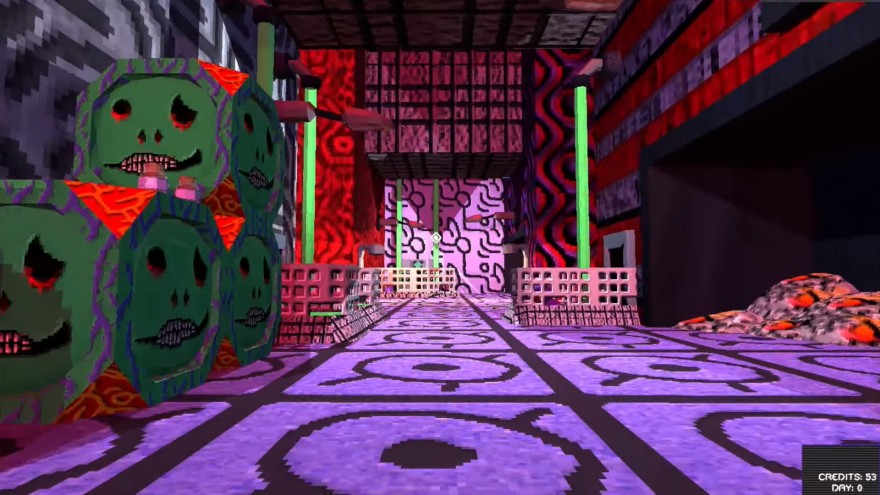 Lilith’s worlds are jarring—cluttered cityscapes of a million violent colors. The follow-up to Crypt Worlds and a self-described “first-person hell labyrinth,” Crypt Underworld in particular is a realm of hellish stripmalls, ghost highways, violent crime scenes, and outlandish dance clubs.

Lilith is good at rendering emotion into virtual space

Here, vending machines dispense skulls and there is garbage everywhere. Common activities may include pissing people’s limbs off, becoming A Dracula, kissing a cactus, and decorating your apartment.

According to its recently launched Kickstarter, Crypt Underworld is meant to emulate its creator’s own feelings from living alone and impoverished in a big city. Lilith is good at rendering emotion into virtual space in this way.

Her previous game, Oneiric Gardens, presents a series of linked rooms, each a representation of some half-remembered place: a video store, a sunny beach, a city street at night. These places are slightly off in their own awkward way, the way memories often are, but there’s another layer of story in the abstraction.

Meanwhile, Tape Dream remains one of the most uncomfortable uses of space I’ve ever experienced in a game, asking you to collect and watch ominous VHS tapes while nearby, a mutilated figure of stretched skin and gore floats in your peripheral.

There isn’t a lot of information about Crypt Underworld on its Kickstarter, but that’s fine—all you need to do is step into one of Lilith’s worlds to know what’s in store.