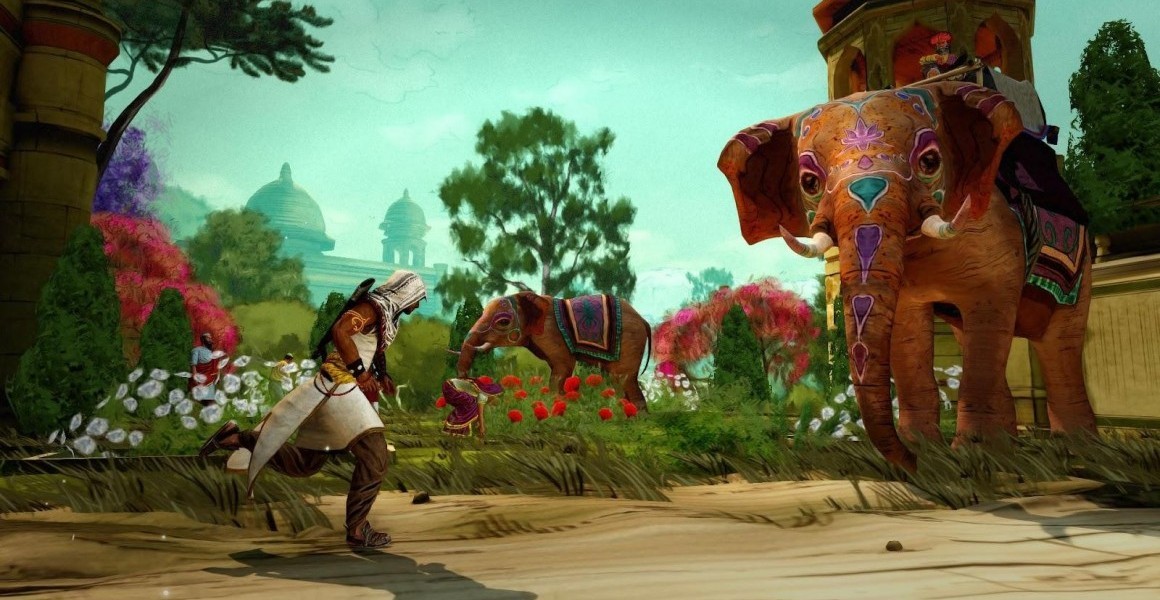 India is a diverse country, home to some 3499 separate communities and 325 different languages and dialects, according to one anthropological survey. But representation of the region in videogames has been lazy at best and non-existent at worst.

Call of Duty: Modern Warfare 3’s (2011) campaign featured a single mission set in the city of Dharamshala with barely a trace of Indian culture, let alone accuracy. On the other hand, games like Final Fantasy and Smite (2014) tend to bend elements of Indian culture to fit the game’s needs or aesthetic (particularly with Smite’s voluptuous re-imagining of an Indian goddess). “There is a feeling of cringing when you have someone called Shiva, but the thing looks nothing like Shiva is supposed to look,” said Arvind Raja Yadav, an independent game designer who created his own role-playing game inspired by Indian mythology.

Assassin’s Creed Chronicles: India, however, is one title evidently more committed to authentic Indian representation. Set in a bustling city of sandstone and Rangoli patterns, Assassin’s Creed Chronicles: India, an offshoot of the main series, features a cloaked adventurer in the middle of the Sikh War of 1841. The mission is to recover the famed Koh-i-Noor diamond for the good of mankind—while killing a bunch of Sikh enemies along the way. As with other Assassin’s Creed titles by game publisher Ubisoft, plenty of historical research went into its creation. The Sikh weaponry for instance, accurately features the katar, the chakram (a sharp, ringlike blade employed by throwing it), and the bag naka, or “tiger’s claw.”

UK-based Climax Studios, the lead designers behind Chronicles: India, emphasized the importance of original historical sources for their world-building. “We took influence from lithographs. Color was a key component. . . we mixed some Sikh-influence into the world,” the game’s art director Glenn Brace blogged. It’s not hard to see why a big game studio like Ubisoft is turning its attention to India. According to Ken Research, the Indian gaming market is predicted to exceed 2.7 billion dollars in revenue by 2018. As others have speculated, the Chronicles series—which includes two other games set in Russia and China, appears to be Ubisoft’s attempt to court these powerful emerging markets.

As Vishal Golia, CEO of Gamiana Digital Entertainment, told Franchise India, emerging markets are important to game publishers. “Foreign giants like EA and Ubisoft have had Indian presence for a long time, helping nurture the local talent. So the ecosystem is building up,” he explained. This coming-of-age story for Indian gaming, however, is not without complications. Designers who are poorly acquainted with Indian culture often take artistic liberties that mix up or flat-out ignore important nuances. The results can easily come off as offensive and even exploitative. Despite its best attempts, Chronicles: India is not above reproach in regards to cultural marginalization. By casting the Sikhs as the antagonists of the story, some argue the game unwittingly plays into pre-existing stereotypes that paint this religious minority as villainous.

According to Gurinder Mann, the director of the Sikh Museum Initiative, “There is a long way to go before a Sikh character with a turban and beard is seen as being the hero. Only then will we see a true representation of Sikhs in the gaming world.” An example from comic books is already showing a way forward. Last year, Silicon Valley executive Supreet Singh Manchanda launched a Kickstarter project called Super Sikh. The goal was to reboot the modern-day superhero. Not with a reimagining of Superman, Ironman, or Spiderman, but with a secret agent who also wears a turban. The message? Looks don’t define a hero—actions do.

Assassin’s Creed Chronicles: India  might best be thought of as two steps forward coupled with an unfortunate step backward. Yet, despite its more shallow depiction of Sikhs, the game avoids the common pitfalls of other major franchises, which treat India like exotic wallpaper, according to Yadav. The next step, perhaps, would be a blockbuster game that not only features India, but is created by Indians too. “I understand that the Chronicles series is a low-risk way for Ubisoft to explore new settings [but] I’m happy about it, slightly,” said Yadav. If nothing else, the game comes across as a compelling argument for further exploration of the Indian identity in games—as long, of course, as the question of cultural sensitivity isn’t forgotten.