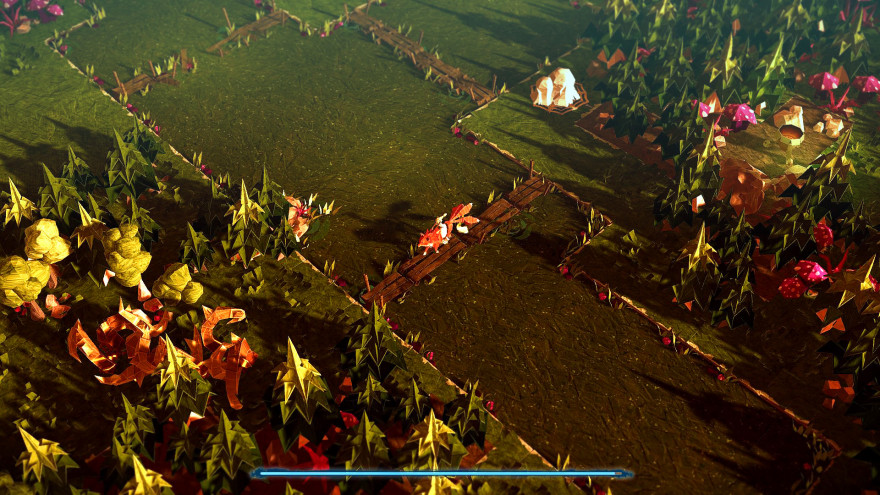 There’s something perpetually charming about tangible crafts in videogames. Whether it’s the hand-made wool in the iOS space-travelling title Voyager (2012), or the ever-customizable papercraft charm of Tearaway (2013), crafts-turned-aesthetic in games always adds an extra layer of tangibility to an otherwise digital experience. In Fishing Cactus’ typing adventure game Epistory, the paper-crafted world itself unfolds as you venture through the game, much like origami itself.

The story literally unfolds from the paper itself

“It just makes sense,” said Laurent Grumiaux, Commercial Director of Fishing Cactus, about the game’s palpable nature. As a wordsmith suffering from writer’s block, the player turns to their mind’s muse. “He wants his flow back,” affirmed Grumiaux. As a writer, the player interacts with the world entirely with their keyboard. The player is tasked with the ability to write out entire sentences, or even just brief phrases, whatever helps to unravel more of the central story (which quite literally unfolds from the paper itself).

Alongside its visually striking approach to origami, Epistory’s playable entity hopes to spur up a connection with players. “There’s duality with it,” said Grumiaux. “Such as, do I play as the fox, or does the girl lead the way?” The fox, perhaps better referenced as a “kitsune” (the Japanese term for foxes), is peculiar in the game. The kitsune has not one tail, but three, and towers compared to the small girl that rides it. The kitsune itself can be seen in origin as tying into the game’s Japanese-leaning artistic style, as kitsunes are prominent in even the oldest of Japanese folklore and art. “Also foxes are smart,” justified Grumiaux, of worldly perceptions of the foxes as a species.

The origami art style of Epistory originally evolved from a different sort of game: one developed for a client of Fishing Cactus. “We wanted to go deeper,” said Grumiaux. The developers then began many iterations using the art style, until one idea stuck. It’s befitting then that Epistory’s name falls from epistolary. Not quite a grandiose letter-writing novel, the game simply exists comfortably as an interactive act of epistolary: with the player progressing by writing letters to himself in the game.

Epistory has been on Steam Early Access since September 2015, but soon has an official release date of March 30 of the entire game. Check out our ongoing coverage of GDC 2016 here.