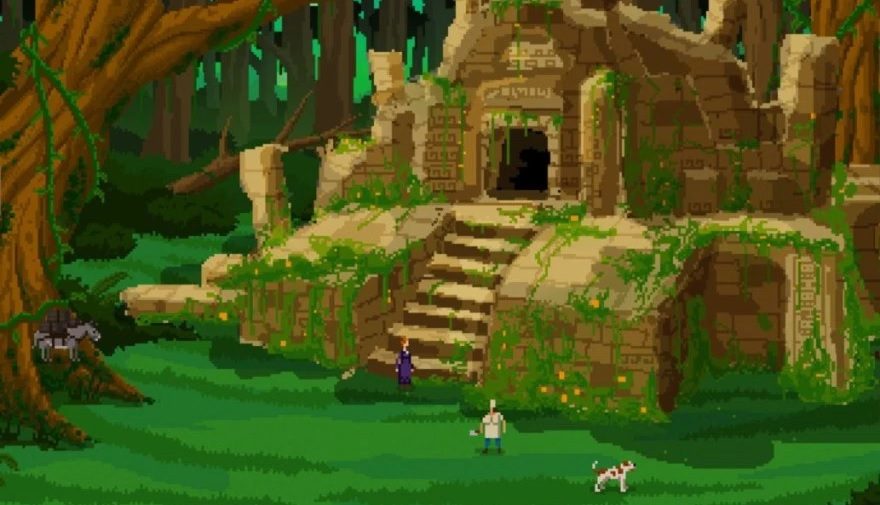 I could think of any number of better titles for The Curious Expedition. Here’s a few: Colonialism Simulator 1900; Literal Tomb Raider; Uncharted 5: The White Man’s Burden. Virtually anything seems better than the title the game actually has.

You do embark on an expedition every time you play it—an adventure into foreign jungles on the other side of the world, where priceless treasures, golden pyramids, and possibly dinosaurs lie in wait. But “curious” seems like an incredibly inappropriate word for what you end up doing there. You will almost always encounter a tribe of “natives”—language and culture unspecified, because it doesn’t really matter to you. You will almost always exploit them in some way: take advantage of their hospitality; trade worthless beads for their most prized supplies; massacre them; enslave them. You will steal totems from their most sacred shrines and laugh as the earth itself protests with massive quakes and violent eruptions. You will return to London with a bag full of pillaged goodies for the British Museum; you will smile and nod as the people cheer. It will all seem “curious” in retrospect. But that way of seeing comes at a moral cost.

it is a pretty good asshole simulator

We’ve come to expect that games that ask us to do horrible things, to reenact huge historical and systemic crimes—torture; mass killing; racial and sexual violence; the marginalization and domination of others—do so with self-consciousness. With a few notable exceptions (e.g. DOOM), it’s hard to think of a modern shooter post-BioShock (2007), post-Spec Ops (2012), that doesn’t ask us to question why we shoot (even if the mode of questioning is simplistic and reductive). It’s also easy to think of games that alienate many players because they don’t simultaneously critique what they simulate: games like Prison Architect (2015) and This is the Police (2016), which make structures of power look benign rather than using game design to expose, and make legible, their inner workings and underlying premises. The Curious Expedition looks a lot like those two games. It’s a simulation of colonial violence that never seems particularly willing to interrogate colonial violence—or even to call what it depicts colonial violence. This is adventure! You’ve got to reach the Golden Pyramid before Marcus Garvey returns home from Tikka-Takka Jungle! (The fact that you can even play as anti-colonial political leader Marcus Garvey feels, like the title, strikingly inappropriate.)

At the same time, the game does something that is self-conscious in a totally different way: insistently and pervasively, it foregrounds the subjectivity and self-involvement of its little pixelated protagonists. Verbs like “seem” overpopulate the descriptive language of the game’s journal: “We felt more than welcome, and the villagers were seemingly excited about our presence.” The journal records emotional responses as much as it records factual events; you get a lot about how “I” feel interlaced with what “I” did. The game’s victory screen, in which you stand Bush-like in front of a banner outside the British Museum that says “TRIUMPH,” feels like a disturbingly personal scene of wish-fulfillment: the masses go wild, shouting “I LOVE YOU” at the top of their lungs. Even the combat traits of your merry band of adventurers tend to be psychological problems: one might be “sexist,” another might be an alcoholic, still another might be a kleptomaniac. “Sanity”—not fuel, health, or supplies—is the main variable that determines survival.

Maybe The Curious Expedition isn’t a responsible colonialism simulator. But it is a pretty good asshole simulator that puts you in the headspace of the colonialist—the white man (even if you play as a woman, even if you play as a black man) who views “natives” as aliens, tools, commodities, and obstacles. The man who cares about nothing beyond fame, fortune, and prestige among his peers. The man who could use the word “curious” to describe the things he did on the other side of the world, because he views it all as an invigorating diversion best enjoyed among frenemies—because he cavalierly disrupts the lives of others to escape the boredom of his own. Even if you play as Charles Darwin, you play as someone a lot more like Donald Trump: an “aging narcissist,” in the words of Rolling Stone’s Matt Taibbi, pursuing adventure tourism because he “got bored of sex and food.” One could debate the value of inhabiting this perspective at all. Even still, the game is compelling in the way it tries to use game design to illuminate the logic of an egregious historical perspective—compelling in part because that perspective was often drawn to the language of games.

The premise of the game is pretty straightforward: you are an intrepid explorer in an organization akin to South Park’s Super Adventure Club, and your objective is to gain enough fame from six back-to-back expeditions to earn a statue of yourself. All the action takes place on a grid of hexagons that looks like a cross between Civilization V (2010) and Catan (1995); you start off each expedition with an almost completely blank map that only reveals its many secrets when you penetrate deeper into it. The more time you spend wandering around the jungles and deserts of distant lands, the more fame and treasure you’ll get—but you can’t dillydally too long, or else your peers, exploring other parts of the world, will return faster than you, or your “Sanity” meter will deplete and random horrible things will start happening. Maybe your idiot Scottish soldier—your party has four additional units, which can be British people, natives, or animals—will drop all your medical supplies and your precious shotgun. Maybe your Persian translator will suddenly become a cannibal. Maybe, upon pillaging a sacred shrine, a nearby volcano will consume the map with rivers of fire. The good thing is any expedition is over when you reach the Golden Pyramid. And it’s always the same Golden Pyramid, even if it’s never in the same place.

The game can feel harrowing and capricious in an Oregon Trail (1971) way—a nostalgic way, heightened by its early-90s, elementary-school-computer-lab art style. A ton of variables determine the flow of any given expedition: the map is randomized; dice rolls determine whether you win or lose in combat against gorillas and angry natives; even more dice rolls determine whether you stumble through a cave alive or step on a stalagmite and die of gangrene. Once you get the hang of it, though, the game transforms into a strangely homogenous and consistent experience. A game about discovery becomes a game about the impossibility of discovering anything. A game about chaos becomes a game about control. A game about variety becomes a game about the interchangeability of its component parts: the natives, who are always the same; the places, which fit into three or four basic templates no matter what continent they’re on; the goal, which is always the same no matter where you’re going. And, of course, the explorers themselves—wildly different historical figures made identical in their fixation on glory, fortune, and each other.

That inevitable experience of sameness sounds like bad game design, but it ends up working in the service of some pretty good writing that seems geared toward the same effect. The game encapsulates the central paradox of the late-Victorian adventure novel, the genre to which it’s most indebted: adventure novels advertise endless variety (no expedition will be the same!), but always end up homogenizing their “exotic” locations and people. One adventure bleeds into the next, as though generated by algorithm; places and people melt into vague assemblages of otherness. The game also ends up encapsulating how adventurers themselves homogenize the rest of the world before they even set foot outside London (which raises a question: do they ever really leave?). In the game, before you begin your expedition, you stand in the middle of a sumptuous parlor and look at an array of randomized destinations on a world map. “Tikki-Takka Jungle” is in Asia; “Yalompani Jungle” is somewhere in the inaccessible interior of Africa, like the Lost World of Kukuanaland in King Solomon’s Mines (1885). Every untapped region beckons with the same alluring blankness.

At the beginning of Heart of Darkness (1899), a novel deeply conscious of the genre tradition from which it emerged, Marlow, the story’s grizzled narrator, describes looking at a map full of that blankness when he was a kid, and feeling the thrill of potential discovery:

“I would look for hours at South America, or Africa, or Australia and lose myself in all the glories of exploration. At that time there were many blank spaces on the earth and when I saw one that looked particularly inviting on a map (but they all look like that) I would put my finger on it and say: When I grow up I will go there.”

When he does grow up, he finds that all the “blank spaces” that once beguiled him have been filled by others. Nothing is still uncharted; every corner of the map is known and controlled. But he retains a “hankering” for a space outside the purview of civilization, a land still veiled in mystery—not so much because he wants the treasures it might contain, but because he wants to have reached it and consumed it before anyone else.

Every untapped region beckons with the same alluring blankness

It’s tempting to frame Marlow’s desire in sexual terms: he wanted to penetrate into virgin territory. But Marlow doesn’t use the language of sex; he uses the language of childhood—the language of play. “I got tired of that game,” he says. On the one hand, his language captures how exploration is always a game: always about winning or losing; always about speed, skill, mastery. On the other hand, he shows us how exploration inevitably enables exploitation—how pursuing discovery in gamelike terms inevitably makes the explorer see places as consumables and people as commodities. To see the world as a giant game board is to see it abstractly, without morality, from a position of bemused detachment. That’s the perspective that enables racist violence and nonchalant pillaging. That’s the perspective embodied by a word like “curious.”

So many videogames—Uncharted, Tomb Raider, Far Cry; the list goes on—follow the template of the adventure novel and try to satiate the desire Marlow felt as a kid: the desire to discover a new place; the desire to discover the Lost World. So many of these games end up plunging us into an exploitative worldview as a result, whether they intend to or not. The Curious Expedition is no exception. But it also places that desire for discovery within another person’s mind, just like Conrad, and keeps its player, like Conrad’s reader, at a critical remove. It lets you see a bigger picture than the grid of hexagons it depicts; it lets you see the mindset that creates the grid, and what that way of thinking inevitably ends up doing.

Rudyard Kipling and many others had a term for Britain’s century-long contest with Russia over the colonial control of Asia. They called it “The Great Game.” Maybe that should’ve been the title.