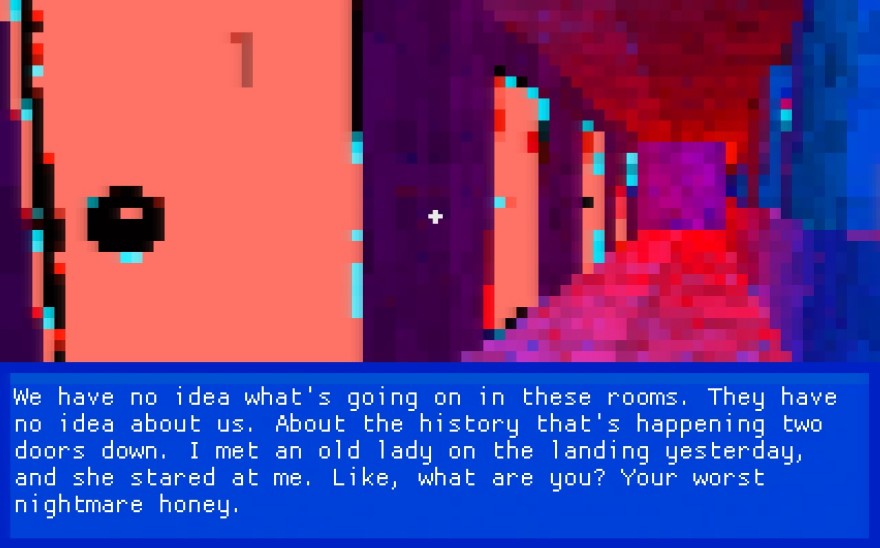 The last shot of the 1991 American road movie Thelma & Louise is the one that most people remember. The titular couple accelerate off the in a 1966 Ford Thunderbird convertible to escape all the rotten men in their lives, and more specifically, the cops that chased them there. The shot in reference fades out (to flashbacks) while the car is in mid-air, implying that their flight lasts forever, and particularly inspiring empowerment in women. Three years later the Spice Girls happened.

Thelma & Louise would have been ruined if, say, the final shot was, instead, the car tumbling down the cliff into a gnarled wreckage of metal and gore. It doesn’t exactly do much to encourage the “girl power” of the ’90s.

The trash of adolescence is all around and your relationship is just as grim.

The ending to last year’s Gone Home is similar to Thelma & Louise‘s. Lonnie decides not to join the army and comes back to Sam so that they can run off and live together. Fade out. You’re left to dream of their relationship lasting forever. It’s a romantic ending that swells in your heart and, especially, speaks of hope for non-heterosexual folk. In that case, Dreamfeel’s Curtain is a “lo-fi narrative about destructive relationships” and is to Gone Home what the crushed car and punctured flesh alternative ending is to Thelma & Louise.

It, too, features two young girls (or so I think) in a relationship, and living together after having run away from home. They even form their own punk band and their apparent rise to success is what the game opens with; “We played an encore!” Then it all comes crashing down.

You know this is going to happen from the start: Curtain‘s garish lo-fi visuals abuse your eyes just as Kaci (your partner in the game) abuses you. In both cases, you have to learn to live with them, no matter how unbearable it might be. The noise isn’t just visual, but also spatial, held in the mess and disrepair of the apartment that you live in. Kaci has smashed the bathroom mirror in a rage and empty beer cans turn the living room into an obstacle course. The trash of adolescence is all around and your relationship is just as grim.

Each object in this fifth floor apartment tells a story and this is reflected in how the game’s narrative is told—you piece it together by investigating each item you find. The most brilliant storytelling device used, however, is found in the shower.

As with many loving abusers, Kaci fluctuates between being lovely and pleading for you to stay, to yelling in your face. This bipolarity is represented in the game by having two versions of the same house that you travel between via a mystical passage in the shower that bends time and space to the narrative’s will. When there are no more items to click on, you find yourself drawn to this magical corridor as if by a narrator, and your back-and-forth travels see you progress through days and months of Kaci’s psychological and, it’s implied, physical abuse of you.

Curtain ends in the best way possible; you move back in with your parents. Unfortunately, that means it potentially crushes the idealist ending of Gone Home with a suggestion of what could have happened to Sam and Lonnie. It’s a bit of a bummer, which is why it’s probably best to dwell on that happy fade out rather than think about what would happen to two high schoolers who’ve run away from home together.

You can download Curtain for free, or pay-what-you-want for it, over on itch.io.