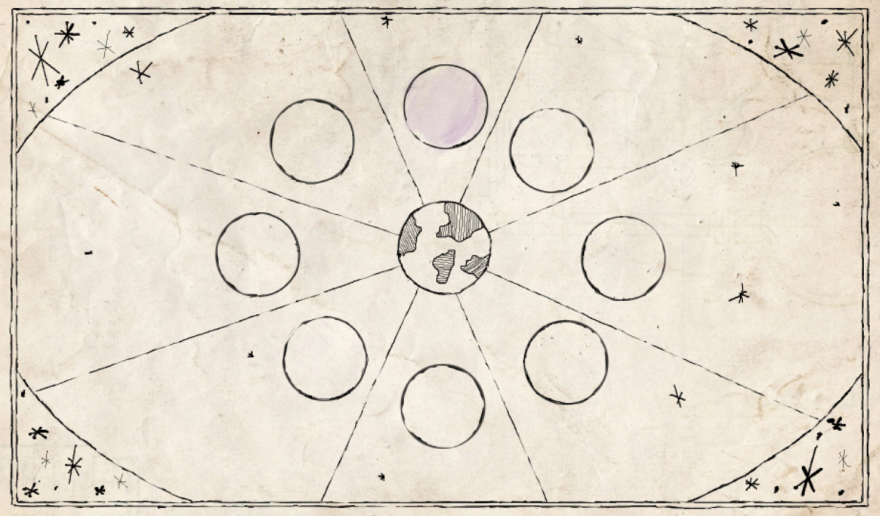 This is not the first time Kara Stone has talked about mental health through a videogame. Previously, she had us participate in the rituals that her doctor prescribed—taking medicine, breathing exercises, practising absolute somatic control—in MedicationMeditation. Now, with her latest game, Cyclothymia, Stone reveals how she has learned to cope with her swaying moods through astrology.

Stone says that cyclothymia, the mood disorder not the game, is something that she feels and goes through. It’s generally considered a milder version of bipolar disorder, meaning that a person with it tends to have periods of euphoria that shift into episodes of anxiety or emotional lows, and then back again. As the name indicates, cyclothymia operates in cycles, and it’s in this that Stone found a resemblance in the phases that astrology recognizes and is informed by.

control is wrangled over the formless whole.

“Astrology has a way for me to practice radical acceptance,” writes Stone. She explains that during one week she may feel melancholic and wonder why. With astrology, she can rationalize this mood as reflecting the moon being in Pisces, which provides some comfort. “I also struggle, like many people with specific mood phases, with thinking that I will be stuck feeling the same way forever, I’ll be this depressed forever, this crushed forever,” Stone continues. “But astrology again has been a great reminder that the world keeps on spinning, and all phases end and new ones begin, daily, weekly, monthly, yearly.”

Cyclothymia (referring to the game this time) is an interactive illustration of how Stone’s astrology-based logic works. It starts you off with a mess of stars; black dots punched into a brown paper canopy with a sketching pen. It’s impossible to see anything but noise and chaos in these stars. But then you click on one of the clusters and, suddenly, some control is wrangled over the formless whole. When you click, the shape of a star sign is annotated in a colored pen, joining the stars like dots. You do this a few more times until you have mastered the entire picture.

This first exercise starts a process in which you find sense where there was once none. This continues throughout the rest of the game’s stages: you trigger orbits, reveal lunar phases, and affect tidal movements by dragging the moon across the screen. Eventually, as you zoom in closer to the surface of the Earth, you find what could be Stone herself in a bedroom, commanded by the day / night cycle as she sleeps and wakes.

Each time I found the purpose hidden away in each of the pictures I came closer to experiencing some of the comfort that Stone described. Everything made sense, could be justified; there was room to breathe now the uncertainty was gone. It feels like you’re gaining an insight into Stone’s worldview. But once it’s all over, as cyclothymia demands, you have to undo everything you’ve done and return disorder back to the universe. This forms the loop, as the game’s end is its start, the title screen ready for you to once again command both ebb and flow.