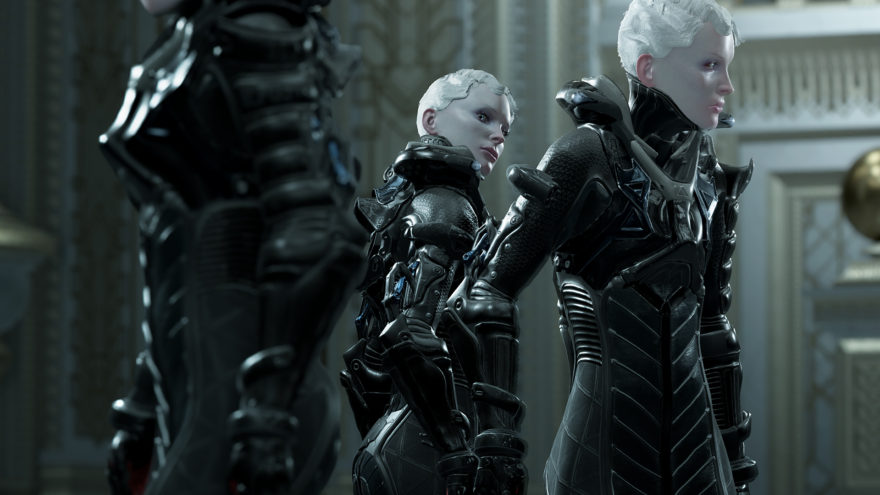 Most videogames are a battle of sorts between the player and the creators. Horror games use tone, aesthetic, sound, lighting, to scare and unease you. Carefully placed enemies and arenas offer challenging conflicts. Gauntlets of chasms and hazards await to test the player’s platforming prowess. But these challenges tend to be static; once the player has learned the needed skills, survived the terror, run and jumped through a game, you’ve bested the developer’s design.

But some games aren’t so … passive. Some can learn and adapt, turn the player’s skill into their weakness. The bosses in Warning Forever (2003) would swell with more armor to counter your attacks and wield more lasers or missiles if those weapons proved to be your downfall previously. Platformer Cloudberry Kingdom (2013) could generate levels that would become more or less difficult based on how well you played. Now, Ultra Ultra’s ECHO is the newest addition to that tier, a sci-fi blend of stealth and action where the player navigates a sentient structure that adapts its minions to counter your actions.

Perfect copies that draw their abilities from the way you play

That structure, the ancient technological Palace of a long-forgotten civilization, houses powerful technology within, and your pale-haired heroine En is seeking the means bring back a loved one. But the Palace will not give you this power willingly; it’s an intelligent guardian using the most effective weapon against En and, by extension, the player. From its pristine corridors and chambers emerge Echoes, perfect copies of En that draw their abilities from the way you play. Vault and sprint through rooms, and Echoes will be able to do the same in their pursuit. Wield your guns against those foes and the next iterations will be able to do the same, firing back at you with deadly precision.

The Palace draws a great deal of power to create these Echoes, and the blackouts that precede each new generation of Echoes is your time to freely fight, sneak, flee, as the Palace is blind during those times. Ultra Ultra’s ambitious project combines tense action with an enemy that can turn your favored strategies against you.

ECHO will arrive on PC and consoles in Spring 2017. You can learn more about the game on Ultra Ultra’s site, Twitter, and Facebook page.