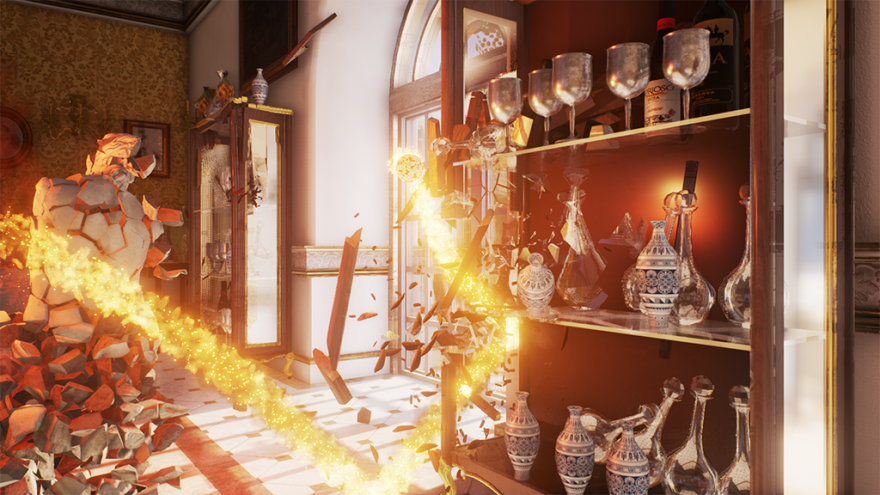 Golf is the sport for people with far too much time and money. The average length of one round is 4 hours; the average golf course is so large, there’s a particular vehicle designed to carry you across the field of play. Its archetypal depiction, in the collective human unconscious, will eternally be an old white man with a sun-visor and a cigar, making someone else carry his clubs from hole to hole. Golf is the sport of the one percent.

why not turn anything into a golf course?

Maybe it’s golf’s status as an activity of the elite that makes bending it towards destruction such an enjoyable concept. Your goal, in the recently announced Dangerous Golf, is to cause as much property damage, in dollars, as possible. “Smash a priceless chandelier,” reads the website for Dangerous Golf. “Destroy a kitchen full of china!” Satisfy that urge you get to obliterate the wealth gap, implies Three Fields Entertainment. Fuck the rich, I’m pretty sure is implicit. One of the three images we’ve seen so far includes a white marble bust shattering to pieces as a red-hot golf ball bursts from its chest like an alien parasite. Marx predicted as much when he said “The weapons with which the bourgeoisie felled feudalism to the ground are now turned against the bourgeoisie itself.”

This proletariat theming carries over into the course design for Dangerous Golf. Most golf courses require a horrific amount of water to remain lush and green. In California, the Natural Resource Defense Council estimated that “an average Palm Springs golf course uses the same amount of water in one day that a family of four uses in one year.” Rather than take water from the thirsty mouths of the lower classes, why not turn anything into a golf course? Courses described by Three Fields Entertainment so far include a medieval castle, which seems pretty difficult to mess up, and a fancy ballroom, which seems less so. Best of all, fight back against the overpowering greed of the oil industry by blowing a gas station the fuck up.

While Dangerous Golf will be the studio’s first game, founders Alex Ward and Fiona Sperry have a pedigree in destruction. Black (2005), which they made while leading Critereon Games, was a first-person shooter which was mainly about how cool all the guns sounded. Burnout (2001), a game about smashing beautiful cars into flaming hunks of slag, was the beginning of their experimentation with wealth destruction. Look forward to their latest entry into the genre in May of this year.

You can find out more about Dangerous Golf on its website.