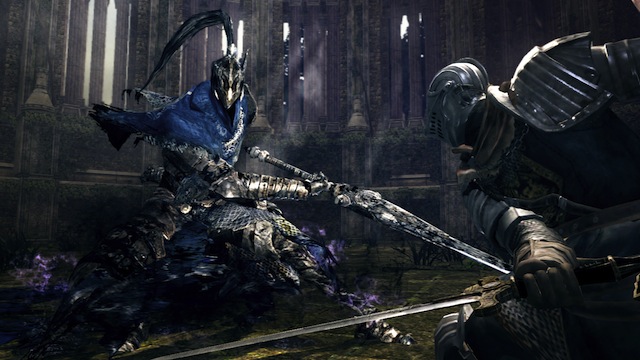 In a harrowing tidbit of information that filled us and doubtlessly a few of our readers with existential questions, Hidetaka Miyazaki, the director of the widely praised Dark Souls and Demon’s Souls games, told reporters at Edge that he would have a very minimal role, a supervisory one, in the production of Dark Souls 2. For many games, a change in director wouldn’t have much of an impact. The process would churn on as business per usual. But for Souls, which gave the impression that it was wrenched from Miyazaki’s dark and wretched heart, the change is hard to fathom.

The good news is that Miyazaki is rumored to be working on a new game with the same company, which is practically guaranteed to be as torturous as gingerly peeling a bandaid from a hairy arm, but as someone who adores the Souls games, this puts me in somewhat of a pickle. Though you’ll often hear elaborate and not-at-all forced analogies comparing Dark Souls to confessional devices of the Spanish Inquisition, what people are really fawning over is the game’s immaculate sense of pace, the way the pieces hang together, the style, and how each slim victory and monumental failure attunes you to a grander vision. In other words, the domain of the director.

For now the talk by fans is that the new Dark Souls will be easier and longer, both which strike me as mistakes Miyazaki wouldn’t make. I don’t put it past him to go longer, but part of the beauty is that play is tightly woven, and I doubt they could keep up the tension given the short development time. And although an easier game certainly sounds appealing, what is Dark Souls if not a slow march with a heavy axe through all-to-familiar portcullises into the face of almost certain death?

The best experiences don’t translate well to light and easy. The armor was wonderful because the good stuff weighed a ton. Some of the best moments were when I’d load my knight down with a ponderous helm and cuirass and greaves so that she could barely move, scheming that if I got in close to the elephantine unchained gimp, that had clobbered me four times previously, and just kept swinging that he would fall before I did. Another time I remember dueling a sexy lady transmogrified into a vomiting spider. We battled about thirty times and I was undeniably outmatched, but a faithful co-op partner, a shirtless rampaging barbarian who lives on nameless in infamy, stuck it out with me and on the thirty-first time the spider queen fell.

This is the work of a master. But I hope Miyazaki is less of an auteur than I’m giving him credit for. Otherwise, Dark Souls 2 may be dead to me.