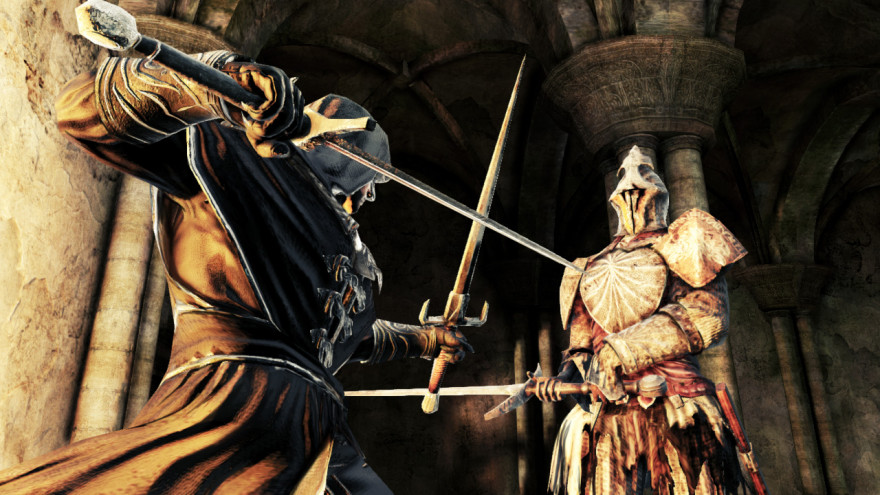 Like a middle-aged man who attends exactly one salsa dancing class, I was briefly resolved to try something new. No more of the great knobbly weapons I carried in Dark Souls, the sticks that rested on my guy’s shoulder like bloated flagpoles. No more bingeing the whole stamina bar on one obscene attack, then waiting drunkenly for the return blow. I wanted to play someone light and neat, a guy who isn’t always picking himself up off the ground. I was done with whack-a-mole; now it was time for ski-ball.

I chose the dual-wielding swordsman, who carries these two blades with the confidence of a technician. Two taps of R1 send the shortsword spinning in an easy orbit around his palm, with the sort of deft flick that almost nobody can animate into a small virtual person. I didn’t yet understand how to get into the dual-wielding power stance, so instead I relied on a grim L-R-L-R attack, hacking forward like a maniac woodsman. There’s some satisfaction in using delicate instruments stupidly.

I used them to topple an angry tree and stab an old woman in passing. She wasn’t much bothered. These things floated like feathers and stung like moths. I later sold them to a dwarf for almost nothing. See you in hell, starter weapons.

I reinforced the halberd as soon as I got my hands on it, thinking I knew what it was. But the weapon, like DS2 itself, had changed more than I could see.

The new game takes pride in its speed. Fireflies ring the loading screen bonfire twice as fast as their lethargic counterparts in Dark Souls; the saving flame at the top of the screen flickers like it’s on undercranked film. Hollows are now more inclined to turn on their heels to follow you, rather than leaving their backs open for you to drive a truck into. Even the camera feels jumpy.

But there’s a queasy smoothness to its acceleration. The old Souls engine was eccentric (and could be a dog online), but precise in a fussy way that players were attuned to. Movement felt sharp and neat, like your boots stuck fast to the point where they stopped. Weapons hit hard, shifting all but the most heavily armored (or poised) bodies on impact.

The point no longer quivers against the floor for a moment after clanging down.

In the new world, strides are less crisp and combat more airy. Characters don’t flinch as reliably when hit, and they sometimes take damage when they looked clear of danger. The image can be on your side when the numbers aren’t, and your only notice is seeing color sucked out of the health straw. Dodging no longer protects you for the visible duration of the roll, but rather for a certain run of frames near the start of that roll. Forums theorists are hard at work speculating about how much the Adaptability stat affects the “iframes” in that movement. But we used to get all the information at a glance, just by seeing someone midway through the flipping roll, fast roll, medium roll, or fat roll. The Souls series was always eager to show you the details that other RPGs consigned to numbers: the force of a blow or the weight of a tower shield. DS2 takes a step backward, compromising visual feedback for the sake of a buried stat.

All this is to say that the halberd feels like it lost weight. The point no longer quivers against the floor for a moment after clanging down. Your character doesn’t spin back off-balance, carried by its momentum, after swinging and missing. The newly fluid moveset seems to pass through enemies more than interrupt them (even when hitting correctly, with the blade rather than the glossy red shaft). I stopped using it not because it was bad—some players claim it’s among the best early weapons—but because it represents the erosion of fine details that enriched Dark Souls.

I don’t use shields or summoned players when I go through a Souls game for the first time. I bring this up about as often as someone who can fly a helicopter mentions that. But here I just want to explain why this list is so heavy on two-handers and dual-wielded implements. Without an iron wall to cower behind, I also tend to take a licking from some bosses: the Pursuer, Lost Sinner, and Royal Rat Authority (toxic dogs!) gave me a sound thrashing in DS2.

These guys were with me when I finally beat the Pursuer, a pinheaded and very meaty ghost knight. There’s something very fine in the way the crackling Heide Knight Sword scrapes up from the ground one-handed, which I watched a hundred times or so when scratching at the steel wall of Percy’s armor.

Like so many bosses in the game—including the final enemy—I beat Pursuer by repeatedly baiting out one heavy attack (in this case, his three-hit combo) by fidgeting at middle distance, then rolling inside to punish it. DS2 is brazen about repeating boss concepts, as if Miyazaki forbade the team from rolling out new ideas without him. It leans heavily on the stick-to-my-armpit boss (Dragonrider, The Rotten), with a sideline in the stick-to-my-armpit-except-when-I-charge-up boss (Smelter Demon, Velstadt, Looking Glass Knight). The Royal Rat Authority is just Sif dogsitting for Capra. The Old Iron King feels like a museum piece: a giant upper body leaning over a platform, alternating fire breath and melee attacks that give you free shots at his retreating arms.

DS2’s multi-bosses come in twos and threes, but they never feel like a real team, the way Smough & Ornstein did. (Ornstein shows up here by himself, and he’s still more interesting than most of the competition.) Where are the format-breaking bosses like player-controlled Old Monk, the bizarre beings like Adjudicator or Priscilla? The best DS2 has is Darklurker, a four-armed flying weirdo who fires beams with the abandon of Tekken 2’s Devil. Honorable mention to the quick but bland large humanoids, Pursuer and Lost Sinner, who press hard enough to keep you on the back foot, sneaking in nicks with the Heide Knight Sword when you can.

This is what a sign from God looks like: a huge gnarled cork, dropped on me before the game’s tutorial was even over. I gave my starting gift, the Petrified Something, to the trading crows and got this endgame weapon back: a great hammer of “tremendous weight … an offering to the demons that appear in legend.” I don’t know how my character (Clams Casino V) manages to lift it, much less how a pair of crows did.

But there it was, mocking my attempts to class the place up by carrying weapons thinner than a human torso. It’s too late to change, the game said. We have provided the mallet, now you will find the moles.

So when I hit STR 25 (the 50 STR requirement is halved by two-handing) I packed away the little snicker-snack swords and took up a weapon of uproarious idiocy. It bobbed behind Clams’ neck like a massive bulb as I trotted across the poison forests and sullen crypts of Drangleic. I exterminated a race of long-faced Frankenstein monsters in the Lost Bastille, killed them until they no longer respawned, and felt like the man who clubbed the last dodo. I stove players’ heads in with it at the Luna Belfry, catching them occupied by the mechanical gnomes that wait around its staircases. The hammer deformed the first half of my playthrough, falling like an elevator on any enemy that couldn’t move out of the way in time.

The Demon’s Great Hammer lays people low. The two-handed heavy attack is an enormous swing that travels up from your waist and back down to drive enemies into the earth like tent stakes. (I’m less crazy about the short-range horizontal swings.) In DS2’s new paradigm, where most weapons seemed to deal less poise damage than their appearance suggested, this blunt instrument was my one true friend. I would flatten an enemy, watch him rise halfway to his feet, then bring him down again. There was something very mean about this, like a whole crowd of me was gathered around jeering at the monster while it tried to pick itself up. My second favorite weapon.

You can only repeat yourself so many times before it stops being cute. The Souls series is on the brink of wearing out its old gags; you can sense it pausing for applause every time it brings out an old chestnut. (“All the way from Anor Londo—give it up for Ornstein!! And Havel is here!”) There is a running joke in DS2 about a knight in possession of something that looks like the Moonlight Greatsword—the most iconic FromSoft weapon—but is only a cheap copy of the original. DS2 isn’t that sort of impostor, but its best moments can feel like repackaged thrills.

There’s been a slow death of feeling since the series left the melancholy world of Demon’s Souls. DS2’s levels feel like more isolated pocket worlds, smaller and less layered than their predecessors, stripped of the foreshadowing that used to make areas feel so rich. In Dark Souls, we met the dragon’s foot before the dragon, kicked over the stumbling little mushrooms before their big brothers showed up to sock us, glimpsed the Stray Demon through an asylum window hours before we fought him. The game played constantly on our expectations: we didn’t imagine that the giant hydra in Ash Lake could jump over our heads, until we tried to run past it; we didn’t expect to find the furiously repressed Gwyndolin behind the campy facade of Gwynevere. Try to name similar touches in DS2, and you’ll come up with a very short list.

But there’s still something powerful about DS2’s dogged preservation of old forms. Its enormous greatsword is a larger and more dented descendant of the Greatlord Greatsword from Dark Souls, with a straighter vertical slash. If you tap R1 again after slamming it down, your character grinds the point forward as he wrenches the blade back up, looking suspiciously like Soul Calibur’s Siegfried.

I can get behind DS2’s greatsword, old idea or not. I went on a spree of boss kills with this monster, tearing through the Hutt-like Covetous Demon, the ramshackle collective of Skeleton Lords, the purely metal Executioner’s Chariot. I knocked down The Rotten, who didn’t seem all bad: he raised a hand to his mouth politely before vomiting poison over me. And on through Scorpioness Najka, Duke’s Dear Freja, Smelter Demon. Good night, sweet ladies, good night, good night.

If you thought the game was tough with sword and board, try it with opera glasses and a twig. These are perhaps the worst binoculars of all time, boasting something like 1.1x magnification and unnaturally limited focus. But none of that matters, because these things are magic. Fit them in a weapon slot, hold attack, and turn the game back into King’s Field.

Using these continuously keeps you in first person, from which you can still roll, attack (visualized as greasy swipes), and fire off spells. In Dark Souls, the binoculars were only a novelty; now they’re a novelty taken to a charmingly pointless extreme. Some breed of obnoxious wizard will use these to turn PvP into Hexen, and the game is all the better for it.

When Clams picked these up, I knew his life had come full circle. This was what he was born to do. Two enormous swords resting at jaunty angles on his numb disfigured shoulders. All the excess of dual wielding, none of the grace. No safety, no stamina, only damage. He swings both at once from left to right and back, scattering bones and fanning away ghosts. He looks drunk again, but happy.