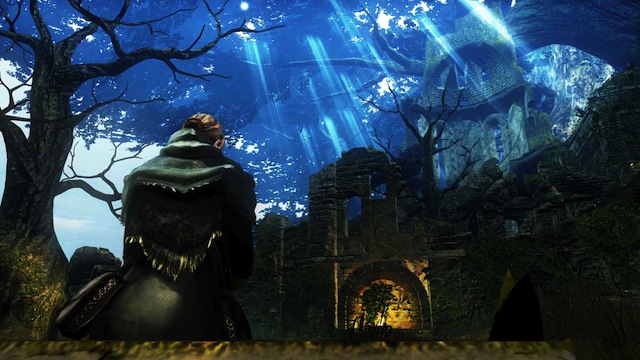 Surely I’m not the only one to give up on Dark Souls, to throw my hands up and say: screw this game. Dark Souls is one of the best role-playing games in recent memory (it came out a year ago this month), but it is also a harrowing experience that requires an extreme amount of patience. After one too many long November nights spent failing, and failing, I had finally had enough. I figured hard games were just not my thing. So I quit. I put the disk in the case, the case in an envelope, and mailed it to Jordan, not a close friend, hoping to never see it again.

Defeatism must be a common sentiment inspired by Dark Souls. But I am probably the lone dumb creature to be defeated and come back for more, after badmouthing the game for a year, calling it, only half-jokingly, an existential-crisis-in-a-box! a nervous breakdown waiting to happen! I was doing fine without it when, out of the blue, and against my own good judgment, I ordered another copy. It was like drunk-dialing an ex, whom I had parted with on bad terms, asking her if she wanted to get… a coffee.

I don’t know what I was thinking. There was no way I could justify giving it a second chance. I had dumped an obscene amount of time into the game already. (45 hours, 37 minutes, and 39 seconds, to be exact.) And by my estimation, I was only halfway through. I certainly didn’t have another forty-eight hours to burn. I told myself I had moved on.

It became clear that I was doing it wrong: the game, and maybe, life.

And yet a few days later and there it was, a sealed copy, sitting on my desk in a pile of letters, like a monkey’s paw. I reluctantly removed the shrink-wrap and put the game in my system. My poor character, a level 47 knight, was still intact, built like a tank. She looked great, but I cannot say I was happy to see her.

The first thing I did was head for New Londo, the horrible stretch of aqueducts that leads over a foggy lake to some elusive MacGuffin. Just so you know, I have never gotten anywhere in New Londo. It is an absolutely merciless locale and ultimately the reason I hung up my claymore and shield in the first place. It’s hard to say why I returned there immediately, except possibly from muscle memory, when I could have gone somewhere, anywhere, else instead.

Perhaps I had forgotten how brutal it really is. To be sure, it was a defiant move. At least things started off well. I took down several feeble ghosts in a few swift chops, deciding at once I had exaggerated the difficulty in my head. But as I confidently rounded a stone corner, I was set upon by a ruthless bunch of choleric phantoms.

While running away, I slipped and fell from a high ledge. The screen unhelpfully pointed out “You Died.” I ended up dying over and over for two hours, in roughly the same spot, until I legitimately started to question what the hell I was doing with my life.

It became clear that I was doing it wrong: the game, and maybe, life.

There are very few things that stress me out more than those dank, miserable ruins, which seem to hold some manipulative power over me. When I think about my low points over the past year, the unpleasantness at New Londo immediately comes to mind. To give you an idea of where that ranks, another was breaking up with my girlfriend of three years, a smart and good-looking woman, who made a lot more money than me. And, again, Dark Souls. I can’t tell you which was worse.

The next day I wised up and left New Londo, reserving its treacherous arches for a much later date. Since then, I’ve actually been enjoying myself. For a hundred-hour game, Dark Souls is remarkably paced. It’s beautiful — not just in a highfalutin ludic sense, but beautiful to look at. The phantasmagoric visions, in which you can see flashes of other players dying in savage ways, may be the most haunting rhetorical device I’ve ever seen in a game. It has impressive architecture, good lighting, and regal costume design. It has depth and complexity. It is modern and old-school at the same time.

I was actually looking forward to Artorias of the Abyss, the downloadable content available this Tuesday, but then I learned that defeating a mountainous Hydra is required first. At this rate, I doubt if I’ll have the chance. Dark Souls is one of my favorite games of whatever generation we’re in, but also a game that I sincerely hate. I expect that, any day now, I will come across some god-awful colossus that makes my life hell, so much so that I mail off my copy. It might even take another whole year for me to forget, and then want to remember.