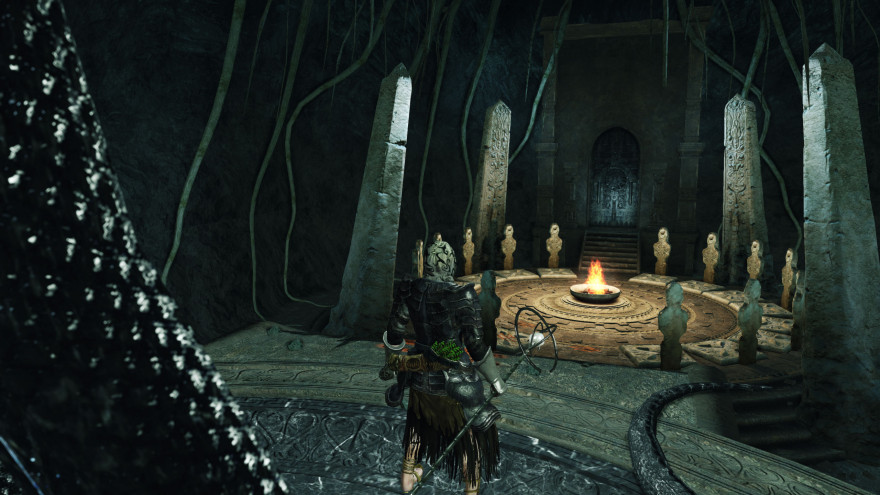 Everything seemed fine until I found the dinosaur room. The first leg of my trip had been inspired, even funny. I made the stone columns of Shulva jump and fall like bass and treble levels, knocking the city’s guardians off their feet. I turned the stone wheels of the Dragon’s Sanctum into place and walked through like an ant entering the chamber of a revolver.

Untouchable ghosts chased me over spiked floors until I found and broke their sets of smoking armor, which were stored separately. That didn’t kill the ghosts, but made killing them possible. The ordeal felt correct, of a piece with the challenges of earlier Souls games.

Some of the pieces are holding up better than others, though. I noticed it in the dino room, a cavern crudely fenced by stalagmites and patrolled by squat, mouthy reptile things. They don’t look like anything else in Crown of the Sunken King, though they do look a bit like criminal relatives of Gon. Their bulbous leaping bodies throw the game’s camera into confusion, recalling the famous “dragon asses” of Lost Izalith, which preyed on any player trying to make use of Dark Souls’ lock-on system. (In the Souls series, large dogs and dragons are both natural enemies of lock-on.) Like Izalith, the area is best approached with a piece of old Boletarian advice in mind: “Run straight through.”

But why does this cave of dragon-ass wannabes exist? What’s it doing in a dead city of ghost knights and poison-breathing warriors and a forgotten villain named “Yorgh”? The rest emanates from the toxic dragon at the center of the DLC. The cave seems to come from somewhere else, a reject pile someone raided for odds and ends to fill out the envelope of “additional content.”

The room’s name, “Lair of the Imperfect,” is a wisp of explanation. It suggests that the eyeless mutants sloshing around the cave are the cast-off products of a failed experiment, a concept that the Souls series has pretty well worn out. In Dark Souls, blind old Duke Seath’s immortality research centered on turning folks into squid monsters and ornamental crystals for his basement. (Take a second to imagine Seath turning the pages of all the little books in his library.) Dark Souls II’s Lord Aldia did similar work with giants and dragons in his own inquiry into the secrets of life. Did ramblin’ Aldia stop by Shulva and forget his runty dragonlings in a cave somewhere, like de Soto losing his pigs?

Everything seemed fine until I found the dinosaur room.

The dinosaur room isn’t the only bad thing in the DLC, but it marks the start of the bad things.  Each of the three new boss fights is a clear lift from elsewhere in the series. The best of these revisions is the showpiece battle against Sinh, a dragon who for once has an answer to swordsmen who hide under its belly. But another boss, axe-wielding Elana, is virtually a clone of her sister Nashandra (DSII’s last enemy), who herself was heavily indebted to the Widda Queen of King’s Field IV. And Elana sometimes summons Velstadt, a DSII boss who was a copy of Garl Vinland from Demon’s Souls stretched vertically. Fighting those two, you might forget that you’re playing a new game.

The Souls series has been accreting something weaker than history as it goes on. Each game is set in a world with a foggy past and ill-defined present, but recently that vagueness has become an excuse for repetition. Dark Souls II plucks entities like Garl Vinland and Havel from their original context to place them in a new one where they mean almost nothing. Havel had a unique place in Dark Souls: covered in bristling armor, tromping up the stairs of his prison, frustrating low-level players again and again. He can’t be unique in Dark Souls II because he’s in it twice, first as a dark spirit and now as part of a three-man fight in Crown. He’s shrunk from a character to an effect.

Dark Souls’ own DLC, Artorias of the Abyss, never stooped to plagiarism. DSII’s designers never invented adversaries as relentless as thrashing Manus or the possessed Artorias, whose looping jumps felt like a bad memory repeating forever. The DSII team never went as big as the moment when Hawkeye Gough lifts himself out of retirement to shoot down Kalameet for you—the only really heroic act I remember seeing any Souls character perform. I can still picture the blue acne craters in the soil of the Royal Wood better than the ziggurats of Shulva, which I saw yesterday.

DSII remains a skilled, often clever impersonation of the game everyone wanted. But I can’t see the point of teasing out its journey with ever more kings, dragons, and Havels. The more DSII overlaps with its predecessors, the less reason there is to play it at all.