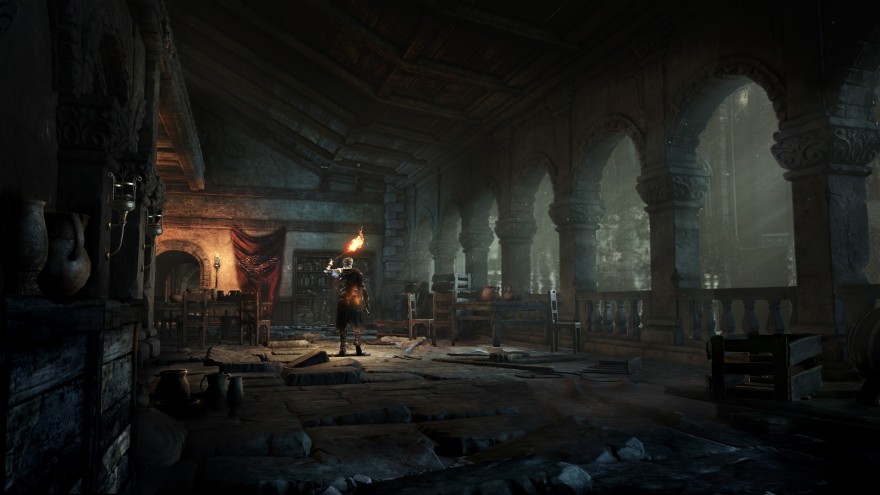 Spoilers for a few Dark Souls III bosses below.

The hardest Souls game, people say, is the one you played first. That’s where you learned the language, starting with the common nouns: the grunting Hollows who bust through wooden barricades, the poison swamp, the dragon who toasts the same spot forever like a puzzle in an adventure game, the giant whose feet must be pummeled until he loses his balance, the soul-lovin’ lady who has suggestive level-up conversations with you, and so on.

But internalizing the games’ finicky grammar is the difficulty. A fluent Souls player follows dozens of bizarre conventions without hesitating. You know to tumble into a swinging sword, rather than away, to capitalize on the untouchable portion of your roll; you’re primed to roll left first, because so many of the world’s monsters are right-handed. You know the number of hairs away from an enemy’s spine or gut you have to stand to enter the riposte or backstab animation. You know to wait for that enemy to halfway stand up before striking again. You know when to queue a roll right after a strike, when to combo slow and aim for a guard break. You know how to kick. You know to use the D-pad to change items as you walk through the fog door to the boss, and you know that boss will have a huge stamina pool and long recovery periods. Most of all you know the cadence of the world, the shape of attacks and the speed of missiles. You follow the clean line of action running beneath the game without needing to think, even as you traverse some of the most intricate digital settings ever built.

Dark Souls III revises these invisible rules with such confidence that the changes barely register; in motion it feels more Soulsy than Dark Souls ever has. It’s set in the new (sort of) kingdom of Lothric, but brings back almost every old face, if not in the flesh then as a statue or weapon or grisly little trophy worn by someone unpleasant. It’s picked up a bit of the pace that Bloodborne introduced last year (and its directed splashes of blood), which you feel when you chain-roll or dive out of the way. Enemy movements are sharper, without the false notes of Dark Souls II (2014), where even big guys could turn continuously on their heels to face danger, as if they had your character lassoed. In fact many legacies of Dark Souls II have been tartly dismissed, from its greasy feet to its miserly backstab windows and stat-derived iframes.

Dark Souls III is not the hardest Souls game (unless, of course, it’s the one you play first), but it feels like the most playful, the one that forces the most adjustments from you. Many of the snappy new attacks are there to mess with your conditioning. A casual shield push stops rolling backstabbers cold. A rib-disintegrating back kick sends you flying away as you step up to take a free shot. A murderous bite arrives from an impossible angle. A goat-man jumps on your head at odd intervals. Lothric’s inhabitants simply have more answers to your attacks, even if they look a lot like someone from Lordran or Boletaria who used to be less quick. The player’s toolkit expands in turn with Weapon Arts. One of these is the Uchigatana’s quick-draw slash, which ducks under taller enemies’ swings and turns out to be the best dog-killing move in the series. You get a clinic in how to use it from the redoubtable Sword Master, a nearly nude man you’ll find completely surrounded by players’ bloodstains.

When you climb the craggy steps to fight Sword Master, you’re maybe 15 minutes into the game, which is enough time to see that it is great. It begins in a graveyard where the tombstones are jammed together Yharnam-style, too closely to mark bodies buried in any configuration, which is the kind of thing you can get away with when all the corpses come back to life anyway. Twisted gray trees bow down from the ridges above, the first of many entities in this sovereignty-obsessed game to abase themselves. (See also: the bending statues in Irithyll, a town that always looks like Christmas, and various legless lords). Crumpling arches slouch toward the stones below, which have been turned up by roots. The smeared textures and planed surfaces of previous mainline Souls games return fibrous and uneven. Some of the most painterly details reveal themselves only when you walk through the level in reverse: a series tradition that was allowed to lapse in Dark Souls II, which favored a kind of big-box level design.

You find a dead knight in full armor—the original icon of Demon’s Souls (2009)—with his head resting in a cracked basin, and see an eroding bell tower above him that recalls the first task of Dark Souls. Soon afterward you arrive at the game’s hub, which leans out over a sea of fog (an unmoving Hollow is placed on a cliff’s edge to make the reference explicit), and see inside that it too is a dreamlike mixture of the first and second games. The series has always rambled about the past and present overlapping. In the “transitory lands” of Dark Souls III you see them together everywhere, sometimes overlaid and sometimes broken against each other in seismic movements. There’s a man who has literally cannibalized the past, and a place so crammed with mismatched and decaying fortifications that it looks like the actual ash heap of history.

There’s some recycling we’re not supposed to notice: statues in Irithyll swiped from Cainhurst, for example, or the red-eyed guys in the swamp who move like Sages and howl like Vicar Amelia. But more often the old material is revisited openly. When Dark Souls III brings you back to spaces you know well, but shows them empty or cracked open or foul with muck, it provokes a nostalgic reaction that can be both intense and kind of ridiculous. The previous games were never set in a golden era but in hopeless, apocalyptic times; now we’re meant to look back at the end of days as the good old days.

Dark Souls III isn’t the kind of melancholy original that Demon’s Souls was, and it doesn’t pivot to another genre like Bloodborne turned toward horror. Instead it leans into the absurdity of bringing together every idea the series ever had and throws a pretty amazing going-away party for it. (Note: series may not actually go away.) When you see that ol’ grunting Hollow crash through his barricade one last time, his placement and delivery play like a joke—in fact, I’m convinced it is a joke. Levels are stuffed with little gags that work like the new enemy movesets, playing against the expectations of the old crowd. One famous hazard reappears in the very first level, and many who die to it will do so thinking “they wouldn’t do that to me in 1-1.”

Strangely, the sequel Dark Souls III reminds me of most is Super Mario World (1990), and not just because they both have an area I think of as the “Vanilla Ghost House.” There’s something about the joyful excesses of Dark Souls III—six-player brawls! Purple phantoms who do whatever they want! Mimics fighting demons! Sand worms out of Dune (1965)!—that looks back to the mad scientist spirit of that older game. Both rebuild and remix old settings in a shameless and hugely successful way. Both refine (and don’t significantly expand) a language their players were already intensely familiar with, and manage to add nuance to action rhythms that already felt close to perfection.

A single movement in Dark Souls III might be the best idea in an action game this year. It’s a cruel spin that a few enemies (notably, one nimble species of skeleton and a giant blue woman) launch into with two swords. Not a balletic motion but a back-breaking thrash, it brings both blades around the torso in tilting loops, over and over, as the right foot crosses below to revolve the monster’s waist toward the player. It’s the sort of unreal combat technique associated with fast wire work, but in Dark Souls III it’s deliberately slow and off-tempo. Some other enemies use halberds and axes for a brisk, even spin; a fuck-off Phase 2 Gascoigne-style spin that just means “get away.” But you can’t get away from the slow spin, because it travels with you. You have to live inside it.

Everyone has their own personal Mt. Rushmore of Soulsborne bosses, with the faces of Artorias, Ebrietas, or Smough & Ornstein glowering down—the great practitioner of the slow spin, Dancer of the Boreal Valley, may soon be carved onto yours. (Alternatively, it might be the optional tough guy/Heavy Metal cover Nameless King, who took me so many tries that the final boss felt like a lightweight afterward.) She’s a stick-thin veiled giant who hunches down and swims forward, breathing deeply and moving languidly until she whips her sword across the floor. Her variable speed and too-long combos are all of the little enemies’ efforts to screw with your patterns writ large.

At the start of her second phase she spins nine times in a row, by my count, with a short pause before some descents to change the cadence, in which she lifts her head like she’s thinking and deciding well JUST ONE MORE. The spin covers too much ground to run from, and it’s hard to cut across. Instead you stay in the pocket, find the timing, and roll: O, O, O, O, O, O, O, O, O. When you get it, it feels as exhilarating as beating False King Allant, or sending Mario hopping over nine distant columns one block wide. You’re proven fluent. You’re absorbed by the spin, by the whole structure of Dark Souls, and for a second you understand it all.

And then you have to beat the boss.