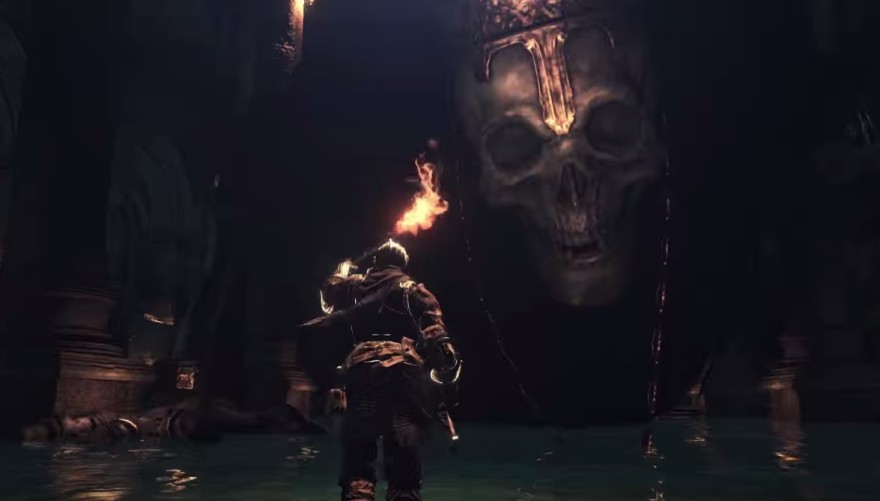 There’s a giant skull fella leering out of the darkness towards a pale light in the new Dark Souls III trailer. As it has no flesh, you can’t tell if the facial expression it might pull as the torch-bearing knight walks up to it would be a sneer of anger, or a less hostile and quizzical one. All we can see is its enormity; it’s as if a colossal icon for death. It’s this that the trailer seems hell-bent on showing us, over and over.

This is undoubtedly a post-Bloodborne effort.

We get it: everything is dying in Dark Souls III. “Only embers remain,” we were told in the announcement trailer back in June. This one opens with a dragon laying over a castle rampart, divorced of life, its skin turning to ash as the wind carries its flakes towards a gold-drenched sky. It’s the type of beautiful melancholy that the game’s director Hidetaka Miyazaki is known for dressing his monsters with.

At ground level, we are shown stone sculptures that beg towards the sky as if stuck inside a Biblical depiction of hell. The undead reach up with gray skin towards their fellow corpses strung out on the gnarled skeletons of trees. Other undead, which seem to have more sense, march the midnight streets together, their decrepit heads bowed while their bodies hide inside swathes of red cloth.

These are all images of decay and hopelessness. We can all see that. But just in case the message wasn’t clear, up pops that massive skull-thing, rearing its crowned head from the shallows. I don’t know its name but Death wouldn’t be an ill fit.

We also see the first footage of Dark Souls III‘s combat in this trailer. It’s noticeably sped up, lighter-feeling, and much bloodier than the Dark Souls games before it. This is undoubtedly a post-Bloodborne effort. In fact, given the grand candlelit cathedrals and night time bell tolls, Dark Souls III seems more akin to Bloodborne than it does its namesake.

This extends to the aggressiveness of the enemies, which may have the look of a cadaver, but don’t seem to have the rigor mortis that you’d expect to come with it. Many of them swipe ravenously with maces, pikes, and greatswords, unrestricted by the slower-paced requirements of previous Souls games. One of them, a slender undead giant wearing gossamer as a cloak, picks the knight up and thrusts them back down at a horrendous pace, fiery sword impaling the belly. We don’t need to see the familiar “You Died” message after that. We know it too well by now.

Dark Souls III is heading to PlayStation 4, Xbox One, and PC in early 2016.