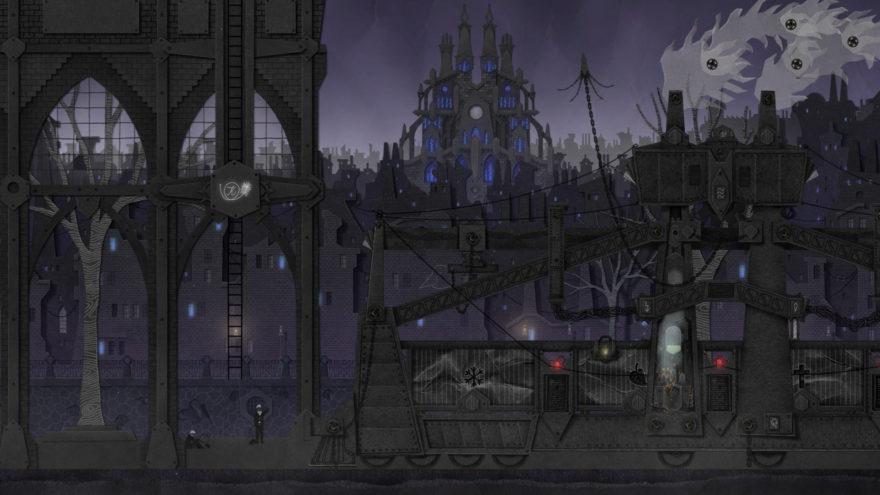 Paperash Studio has done everything creative you can do with paper, except put words on it. The studio’s textless adventure, Dark Train, is made entirely out of papercraft and code—a carefully folded world of bats and belfries, soccer fields and sleazy hotels. Its title flirts with the idea of being a long-lost piece of ’90s cinema directed by Alex Proyas (responsible for The Crow and Dark City), and to be fair, that’s not a bad analogy.

While the camera sticks like cement to the titular train, it is but a vessel for your viewpoint as it moves through the city; a city erected in black, a city with industry and families packed tight together, a city not unlike the sprawl of London. It is a place in permanent smog, where the architecture unites like a bed of nails, an oppressive state enforced by robotic animals. You play as one of them, a mechanical squid, chained to the train as it sits on its tracks, tasked with starting it up and maintaining its journey.

How you might go about completing that task has an answer you can only poke at with your pointy-tipped head. Dark Train‘s complete lack of tutorial or any kind of obvious guidance parallels its stern environments. An implicit get to work or fuck off attitude. Getting the train’s wheels rolling is but the first test in a series: do you have the patience and curiosity to figure everything out on your own? If not, the game will wear thin very quickly, and you will probably leave it behind. I was nearly part of that despondent population, as after I got the train moving I couldn’t find what else to do.

It was at this time that I was drawn to let the squid’s chain drag across the passing ground, sparks from the friction grazing her face, until the momentum suddenly, violently pulled her down, dragging her body helplessly across the concrete. I thought she’d die, I thought that’s how we’d break free from this moving prison—where we were trapped by my incompetence—but she’s a robot, and can take a beating. Escape isn’t so easy.

As that option didn’t work out I found the resolve to commit to learning the game’s subtle lexicon, and it’s worth the effort. It’s rare these days for a game to truly prove perplexing, for it to feel like videogames did to me as a toddler, when their visual cues and cultural references didn’t make any sense, like they were broadcast by an alien frequency that I had somehow tapped into. Dark Train puckers up tight when you arrive, but you can steadily grease its stiff gears, and over time you should find that you can work the dark engine with considerable ease.

While part of Dark Train is upholding this mastery over what Paperash delightfully refer to as an “unpredictable railroad tamagotchi,” this is only the bedrock of its appeal. In fact, as with any kind of resource management / babysitting, taking care of the train is about as dull as the game gets. What you’ll stick around for is the discovery of pocket worlds inside the train’s carriages. These are small universes framed by a metal container. You head inside and find whole forests, a church and graveyard, and most remarkable, a whole other city. Far from magic, these tiny dimensions seem totally possible in the world of Dark Train, a trick of the technology—it is your first cue to pursue the game’s story, to unravel the narrative that whizzes past you like the city in the background, barely giving you time to chart its contours.

And so you give chase: putting out fires in passing buildings, conducting electricity to light up a community, changing the hands of a beaten-up clock. You solve puzzle after puzzle, never knowing exactly what you’re doing or what you’ve achieved, but incrementally the fragments begin to take shape, and you start to connect the dots. Dark Train‘s mode of storytelling might be the most shrouded I’ve seen in a while. It’s what gives it an allure as the game slowly sheds a little more light for you on its dark world.

You can purchase Dark Train on Steam and find out more on its website.