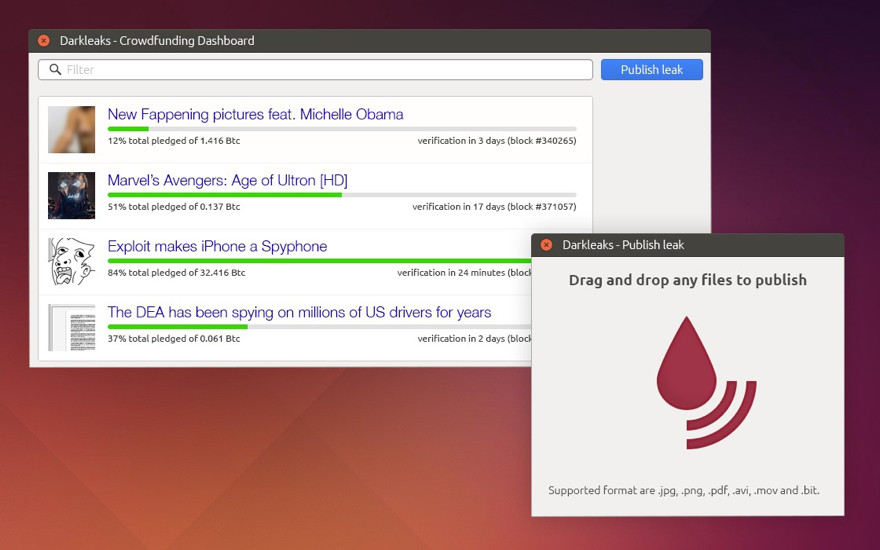 Leaking documents—or, to use a broader and more value neutral term, disseminating information—is a challenging proposition. Leakers want to protect their anonymity and recipients of information want to be able to confirm its veracity. These imperatives can easily be at cross-purposes.

The barriers that individuals seeking to exchange information must overcome are, in part, design problems. This isn’t a small-d design problem, but a challenge similar to the macro orientation of game design: how do you design a structure of incentives that ensures that both parties in a transaction get what they want?

Darkleaks, a decentralized (black) market for trading information, attempts to resolve these problems using the block chain technology that Bitcoin is based on. The block chain, which acts as a sort of virtual ledger, ensures that transactions in diffuse, anonymous networks are only completed once. (How this is done is a story for another time. In the meantime, Michael Nielsen offers an excellent summary of the bitcoin protocol.) When an individual uploads a file to Darkleaks, that file is divided into segments and encrypted. A few of those segments are then randomly selected by the block chain and released so that the veracity of the leaker’s claims can be assessed. If Darkleaks users are satisfied that the promised documents are real and of value, they can pay for their release using Bitcoins. The moment the leaker collects his/her payment, the remaining encrypted segments are released. There is no central body coordinating this sequence of transactions; there is only the block chain.

There is no central body to coordinate transactions; there is only the block chain.

Darkleaks is not without its problems. One can reasonably ask whether some of the exchanges it seeks to facilitate, such as celebrity sex pictures, feature films, and exploits, ought to be facilitated in the first place. There’s also room to debate whether leakers of state secrets should be rewarded with cold, hard, (cratering) digital cash. The incentive structure that Darkleaks creates has little to do with social utility; it simply ensures that trades are efficiently completed. In that respect, Darkleaks is best understood as an upgrade on the Silk Road marketplace, whose central power, Ross Ulbricht (aka Dread Pirate Roberts) was found guilty on seven federal charges on Wednesday. Insofar as it has no central leader, Darkleaks’ eliminates the Silk Road’s main vulnerability and adds a mechanism to avoid fraud.

These mechanisms are of value even to those who are not interested in purchasing leaked nudes or classified military documents. Problems of trust, especially in decentralized power structures, exist all over the Internet. How do you ensure that the player trading an object with you in a game won’t defraud you? Quite possibly with a mechanism like Darkleak’s.