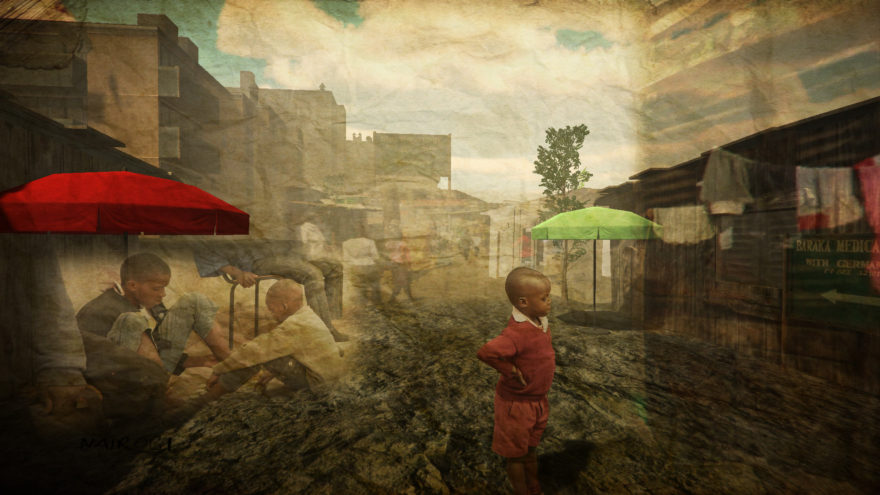 The keyword for the Austrian art group goldextra is “experience.” The group presented its online multiplayer game Frontiers with a sentence that fed this idea: “Don’t just watch, experience the news yourself.” Frontiers had virtual recreations of spaces in the Sahara, southern Spain, and Rotterdam so that players could get familiar with the environments that formed the refugee’s journey. The virtuality of the videogame format acts as a surrogate experience for the player—the second-best thing to actually going to these locations and speaking to the people there firsthand.

Goldextra’s latest game dives further into this idea. Called From Darkness, it’s an interactive documentary about the displacement of Africans. You play as a mother searching for her lost daughter who was a reporter based around Nairobi. It is there, in Kenya’s busy capital, that you first travel, but soon end up exploring surrounding villages and slum cities as the mother is compelled to discover the stories the media doesn’t cover—those told by street children, NGO workers, and refugees.

What’s striking about the environments in From Darkness is how they are constructed through collage: goldextra traveled to Kenya and Uganda for research, gathering over 60 hours of video footage, interviews, and sound that is used alongside photos and news reports to create the walls of its virtual spaces. “We wanted to recreate our research experience as a first-person player experience,” Tobias Hammerle of goldextra told me. You walk around these spaces, triggering interviews to play, talking to looping GIFs of villagers, steadily piecing together a picture of the place.

All the information is almost overwhelming with so many personal stories being told. This seems to be intentional, as near the game’s end the mother has something of a breakdown—the voices and pictures from throughout the documentary all appear at once, overlaying each other as a tremendous cacophony. In this moment she is frustrated that there are so many important and touching stories in Kenya and Uganda that aren’t told by reporters like her daughter and aims to do something about it herself.

The point that goldextra seems to be making with From Darkness is that there are a lot of stories to be told about Africa but a lot of them aren’t given any time by the international media. “When it comes to the African continent, there is a common narrative: crisis, wars and catastrophes,” Hammerle said. “Stories like these get multiplied in the echo chambers of modern media, and then dominate the image we have of Africans themselves: as either victims or perpetrators.”

Hammerle and the rest of the goldextra team were eager to avoid falling into what they call the journalist’s “trap,” by which they are seduced to tell only the most horrific stories to appeal to their audiences. Goldextra’s tactic was to give a voice to the people they met around Kenya and Uganda when they traveled over there in 2012, letting what they said shape the game’s narrative, rather than trying to confirm what they thought they already knew about these local populations.

It’s also why Hammerle commits to the idea that From Darkness is an “experience” rather than an “educational” game. The difference being that an experience lets the player come up with their own conclusions from what they’re presented, whereas an educational game might try to push specific lessons about its subject on to the player. The latter is also, arguably, what the media unavoidably ends up doing when it reports on these regions. That is if they bother to report on them at all—one problem that Hammerle is particularly passionate about is how certain African events are strikingly under-reported.

“Ask your friends, for instance, to tell you which war they think led to the most casualties after the Second World War,” he said. “I bet only few would know the correct answer: It was the Congo war, which caused up to seven million deaths in little more than five years. Now isn’t it surprising that we don’t hear much about conflicts like these? I personally think there is a need for some counter strategies against this blatant media silence when it comes to certain topics, not to mention the problematic interdependencies with the West.”

Hammerle and the rest of goldextra hopes that From Darkness will help players to want to find out more about the stories, big and large, that exist in Africa. An interactive documentary can help give more insight into the continent and its people, but Hammerle encourages players to travel there for themselves, to discover new stories and to give them a voice if they can.