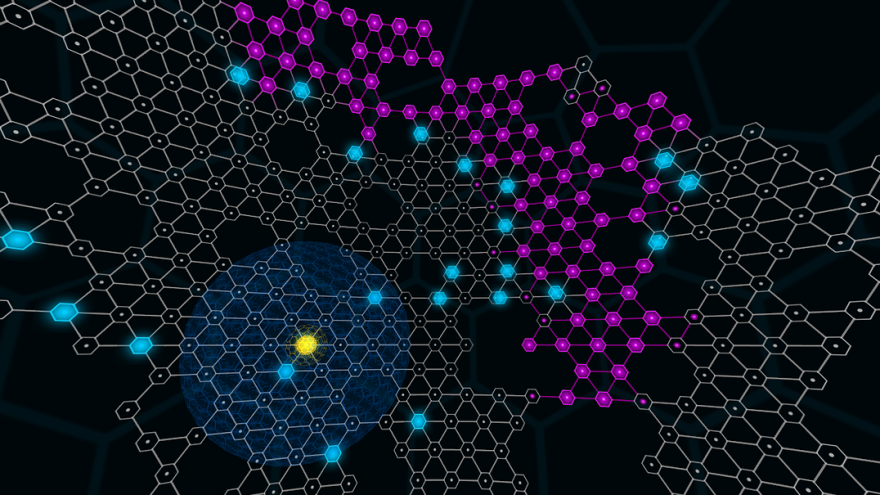 The neon synapses of the game Darknet are your ticket to cyberspace, and pretty much the only way to get there. Developed for Oculus Rift, the cyber-punkish prototype took first prize in the VR Game Jam, and now it’s fleshed out into a full-fledged excursion into that idealized ‘80s vision of technology. “Neon wireframes, abstract data visualization, and total information overload,” to quote E. McNeill, the game’s creator. That it’s in virtual reality only helps medium match message.

One of the most appealing aspects of virtual reality, aside from “OMG I’m inside a videogame,” is that it will force developers to think of games from new perspectives and bore out untapped forms that don’t fall into pre-established genres.

Darknet is an example. It doesn’t suffice to call it a real-time strategy game, although it is strategic and takes place in real-time. Categorically, it is more of a puzzle-y, roguish, first-person, race-against-the-clock about hacking cyberspace, the way it was imagined in all those great but not-so-great cyberpunk movies of the ‘90s. Johnny Mnemonic is a good point of reference.

All of which is to say: it’s about finding weaknesses in wildly visualized computer systems, surfing the grid and chiseling into ICE to exploit highly illicit information clusters. “The most exciting part of the fantasy is the idea that all of this light and color somehow has meaning, and if I could just learn to read it properly, I could become master of that world” McNeill told me. Darknet is designed around that beautiful, cyber-geek ideal.

Of course, the Gibsonian fantasy of speed-fueled, geometric information highways never materialized. Cyberspace as envisioned in the 80s would be a user interface nightmare. “Who would actually use something like that? It sound terrible,” he said, followed by an tongue-wagging emoticon.

“A lot of great fantasies fall apart when they collide with reality,” he says. However, that computer world of cyber-espionage and clashing colors makes a wonderful place to visit in virtual reality.