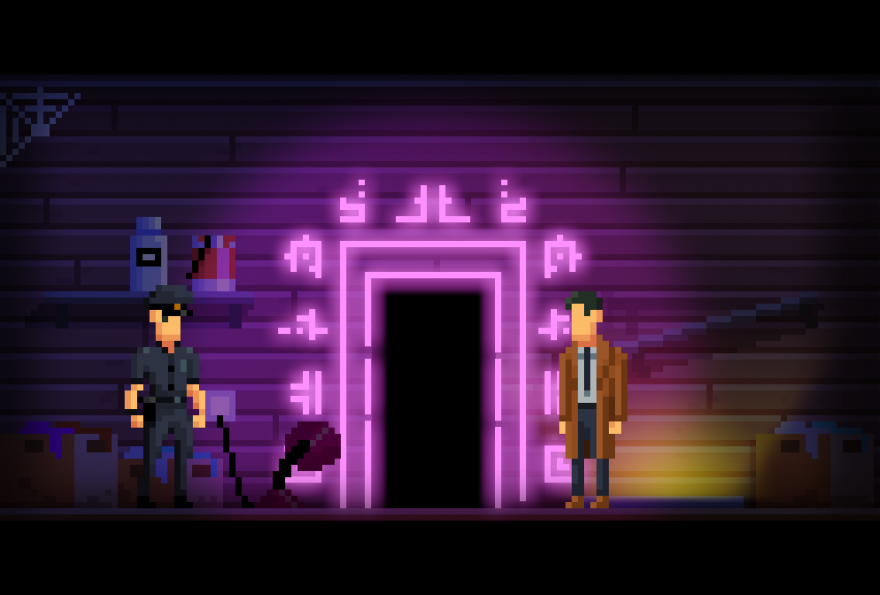 Detective videogames have a long, somewhat fraught history. You’d think the two would go together like peanut butter and jelly. I mean, what with all the obsessive poking around and gun waving, detective work is the closest IRL equivalent to playing a videogame. But as the overhyped L. A. Noire proved, videogames still have a lot to figure out when it comes to investigative sleuthing.

But you know what medium has figured out how to capitalize on the detective premise? Television. By my guesstimation, detective shows must make up 75% of daytime television’s lineup. And it doesn’t stop there. From X-Files to Sherlock, the public has spoken—and it clearly prefers its detective stories in a weekly scheduled, episodic format.

McQueen must purge the city of all that goes bump in the night.

Upcoming point-and-click adventure game The Darkside Division comes the closest to mimicking X-Files’ monster-a-week type format. As Detective Francis McQueen, you must work your way through a series of bit-sized paranormal cases which the devs are calling “micro-adventures.” As the sole detective of Twin Lakes’ Darkside Division, McQueen must purge the city of all that goes bump in the night.

Born from the Galway Game Jam late last year, The Darkside Division prototype was created by Paul Conway and Christopher Colston, or DoomCube, in under eight hours. As the Jam’s organizers, the two only made the game to pass the time while competitors were busy creating actual submissions. In the resulting prototype, to quote Doom Cube’s devblog, “the story was a shoehorned mess and the final puzzle of the game got cut short to the point of making little sense, but it had something that we weren’t expecting: charm.”

After all the positive feedback their experiment received, DoomCube decided to expand the project, even employing the help of adventure writer Dave McCabe. From the looks of the new story section of the game’s website, McCabe is already contributing to the game’s overall playful personality. “Francis McQueen lost his family when he was still a rookie,” the character description begins predictably. “He literally lost them. He had snuck a talisman home from the scene of a bizarre crime in order to impress his son. After handing it over, he went to get himself a cold beer, and when he returned to the den, his family was gone. All that remained was the talisman, slightly larger, slightly rounder. And, McQueen swears, it burped…”

In the updated demo released just this week, you must solve the case of a little girl who mysteriously vanishes from within her family’s own mansion—is the occult involved?! Most likely. There certainly is an undeniable charm to the game, with a sense of humor that pokes fun at all the other detective stories that take themselves way too seriously.

DoomCube hope to release the game later in the year. Though they’re optimizing for phones/tablets, you can play the demo in your browser and get more info over at the game’s website. It’s also on Greenlight now.