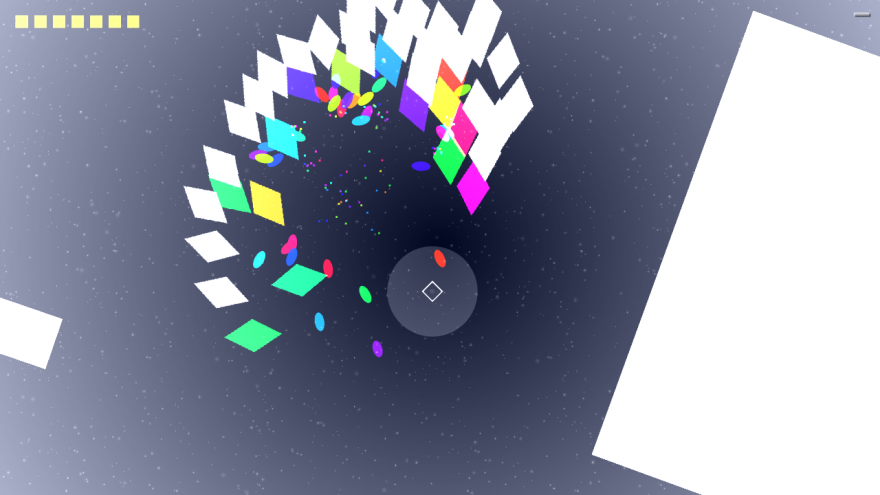 If the Christian Bible was a videogame (and it has been one) then I’d imagine that the tale of David and Goliath would be turned into a boss fight. It’s the perfect set-up: weedy guy overcomes huge brute with, not strength, but resourcefulness.

That’s essentially the idea behind Fermenter’s David. I’m pretty sure the title is a reference to the biblical battle, except rather than a single clash of big and small it has multiple bosses, each singular in its ferocity. Your only weapon is a multi-particle catapult that needs to be charged and aimed while in slow-motion—yet another reference.

It’s a shame that David doesn’t come across so well in screenshots. Impressive visual design isn’t used to ensure enemies are intimidating. Instead, the bosses are constructed from abstract geometry—clusters of loosely bundled triangles—but their bite is much worse than their bark.

It’s the aggressive behavior of these physics-beasts, coupled with the constrictions of the 2D arenas, that provides an intense battle that can be over in seconds if you don’t react fast enough. The enemies will bait you into the water where you’re weaker, fling their entire body at you with the intent of crushing you, or they’ll hide behind destructible walls firing deadly beams of color at you. Each showdown is a dance of death that requires you to feel the flow of each moment, as you dodge attacks, and pelt the beasts with your projectiles in mid-air.

Structurally, David plays like a 2D demake of Shadow of the Colossus. It lacks the melancholy and the expansive world, but the excitement of entering a boss’s lair for the first time is as strong as ever.  Each boss is compared to sins, emotions, and mythical beasts, and once you’re battling against them you’ll more than likely see the connection. “Greed” regenerates if you don’t kill it quick enough. “Flee” chases you through a deadly gauntlet while your catapult lies at the other end. “Anxiety” fires slow-moving squares at you while you attempt to escape a maze.

Once you’ve beaten the bosses with full health, unlocking the biggest door—”Sin” itself—will require you to choose the harder difficulty and face them each once more. This time you’ll have a single square of health and the enemies seem to remember their previous defeat, upping their barbarity. Gulp.

David‘s merits are found in its focus on the high-energy and flow of battles with ferocious beasts. No special effects or gimmicks are used to amp up a bland base as is sometimes seen in boss battles in other videogames. The enemies feel alive because they’re intelligent in their rage. Instead of learning attack patterns you overcome each challenge by understanding the nature of the beast.

You can purchase David on the App Store for 99c. The Windows and Mac versions are available on the official store for a $1.