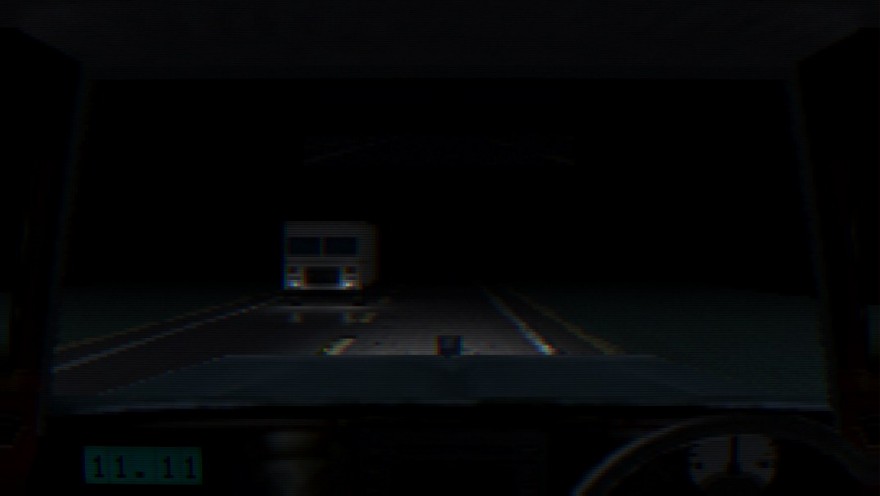 A couple years ago, I had a job that required me to work late. I’d have to drive home on the verge of midnight a few days a week, through an unlit part of town I wasn’t very familiar with. There were jackrabbits in the field by the office. I saw one alive once. More often I’d spot them at night after a day’s worth of traffic had its way with the area, leaving misshapen heaps of red in the street like clumps of smeared oil paint. I never hit one myself. There were barely any cars out that late so I could drive slow and watch for any fleeting shadows darting around in my peripheral.

Even when I wasn’t worrying about roadkill, driving tired down a dark road does something to you. I can’t pin the feeling, but it’s the same one I get watching this trailer for Dead End Road, which describes itself as an “atmospheric driving game” about being pursued by an unknown force.

Dead End Road features a lo-fi style that reminds me of Pol Clarissou’s Station Fantôme. It’s dark, grainy, blurry, like the best found footage films, and it obscures faces and objects just enough to convey that dread you get trying to decipher what that thing emerging from the shadows actually is. There are several screenshots of Dead End Road on its Steam Greenlight page and Twitter, where creator Depressing Drawers also reveals a shop screen and a map of various towns and pit stops along the way to the titular destination.

According to the game’s Steam Greenlight description, you’ll need to reach the home of an old witch who lives on that road in order to escape a curse you’ve somehow brought upon yourself. You’ll need to do it before daybreak too, leaving plenty of opportunity for delirious late night driving. I don’t know what’s supposed to be chasing you, but this eerie Red Room-esque image on Greenlight indicates it’s probably not something pleasant. (This wasn’t initially revealed as “Spooky Car game” for nothing!)

Depressing Drawers is also the creator of the decidedly more humorous Breakfast at Cemetery and the partly text-based first-person shooter Illuminascii.