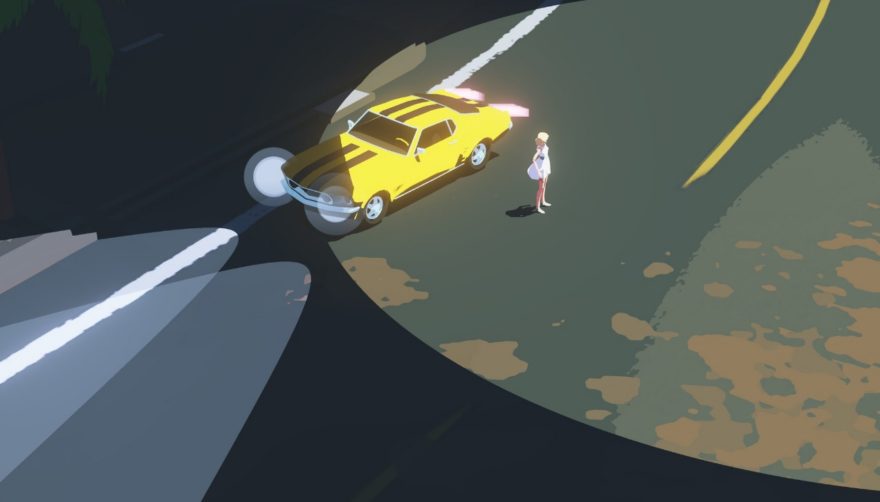 Watching the R-rated horror classic The Evil Dead (1981) when you’re about seven years old leaves a lasting impression. Mike Blackney can vouch for this. He can trace his fascination with a distinctly American strain of horror “set in rural areas or suburbs” back to that seminal viewing. It carried him through the works of authors such as David Morrell, Joe R. Lansdale, and T.E.D. Klein, and now it’s what’s shaping his road-trip horror game Dead Static Drive.

Due to Blackney’s interest in “horror in mundane settings,” the main mission in Dead Static Drive is to go on a “road trip to reconnect with family that you’ve become estranged from.” You travel between towns where, to progress, you only need to refuel and sleep, or at least have some coffee. It’s deliberately dull so as to encourage players to get “distracted by saving the world” along the way. In each town, players will be able to roam freely and find many optional activities to pursue—but these aren’t your typical by-the-number side quests, they’re the meat of the game.

This design not only fits Blackney’s commitment to his horror fiction interests, though, as it’s also a response to other sandbox games. “I’ve found that when I play sandbox games like Oblivion (2006), I’m given at the start an epic quest to save the world but instead of closing all these gates and saving the world, I end up stockpiling cheese and fixing up NPCs marriages and doing anything that I find interesting at the time,” Blackney said. “I sort of want to invert that.” The fact that you are often asked to urgently save the world in these types of games but are able to spend several hours doing much less important tasks has become something of an internet joke. Dead Static Drive‘s approach is more sensible in that regard.

But “sensible” isn’t necessarily a word that should be applied to Dead Static Drive in any other context. Take Blackney’s vision of the game, which he once described to a friend as: “It’d be like Grand Theft Auto … but more like Grand Theft Cthulhu.” Since then, Blackney’s been trying to make a game that satisfies that tagline; one that lets you steal cars and cause havoc for no real reason, a game that has witchcraft, ghosts, and “incomprehensible entities who live below time, exhaustion, and paranoia.” He’s been able to indulge in the cosmic horror that has gripped his attention most of his life.

In fact, Dead Static Drive could probably serve as a manual to understanding many of Blackney’s passions. Aside from the horror, the game’s visual style is a direct throwback to the vintage poster art that he loves so much. From the very start, he’s aimed to make the game look like a “the retro advertisements on travel atlases and old tourism posters, mixed in with that modern vector art like Mondo posters.” It’s a patchwork of subtle gradients, hard lighting, and soft-edged colors. Blackney also takes from anime feature films such as Akira (1988) when working on special effects, plus he has put together a “driving horror bible” of visual influences, they just don’t stop coming.

“William Eggleston and Stephen Shore have some incredible photography that helps me with the really mundane and retro Americana look I’m going for—the old, everyday that we walk past all the time but that doesn’t register,” Blackney added. “Lots of photographers who take the time to photograph everything end up capturing such richness and boredom that is exactly what we need to help make videogames seem grounded and real.”

Currently, Blackney is far from finishing Dead Static Drive but has plans to have it playable by the end of 2017. He’s keen to not put a date on when it might be out as there’s still plenty to do and he’s the only one working on it. Plus, he’s still learning a lot of the processes that go into making Dead Static Drive and refining others. “Just this week I added a new type of lighting that helps make car headlights look more comic by removing the double-bright section in the middle where the two headlights overlap,” Blackney told me, “and while I was doing it, I made a few bugs that I thought added to the comic look.”

He did say that he would love to get the game on consoles, especially as he’s making it with a gamepad in mind, and has been playing his PlayStation Vita a lot during the production, encouraging him to make some decisions with portability in mind. “I’d love for anyone who wants to play it to be able to play it, and for now I’m targeting PC, PS4, and Xbox One,” Blackney said. “I’d also love to see the game on a Switch because it’s the kind of game you really can play in short installments, on the go.”