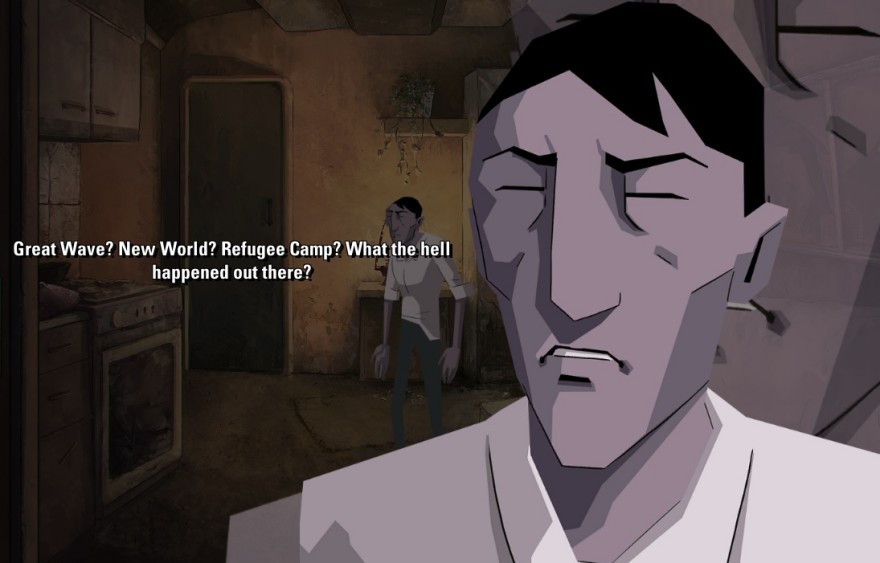 Dead Synchronicity carves into death and disease with a knife and fork, and then holds it against your lips before asking you to chew. If you’ve become engrossed by Telltale’s dark, post-apocalyptic The Walking Dead game series then you have no excuse to not, at least, offer Dead Synchronicity a small taste.

OK, so the post-apocalyptic setting and amnesiac main character sounds far too familiar, but Dead Synchronicity had me intrigued, like, really intrigued. After an enormous explosion that ripped a huge hole in the sky—The Great Wave—humanity was sent back to the Middle Ages. Many died, others were knocked unconscious for a long time, and awoke unable to remember how to move, eat, or do anything. You’re one of the lucky ones; at least you know survival basics. On top of that, a disease that gives its sufferers (the Dissolved) supernatural abilities, as well as an imminent death, plagued humanity.

the moment when time fractures and the screen crackles had me gaping with wonder.

The demo sets this up with an exhilarating intro sequence, and then slowly reveals the details through your conversation with the worried father and snorting homeless man, both doing their best to keep their heads down in the military-controlled dump that’s supposed to be a refugee camp. In just a few minutes you’ve seen a woman dragged off into a white van, kicking and screaming, and then a man shot in the gut by uncaring soldiers. Hope and faith are the only things worth holding on to.

It’s the worst of times, and you—a man who thinks his name is Michael—are in the worst of places. But you have to attempt to break out of there, to the outside, to retrieve medicine for the father’s sick son in exchange for your identity.

Admittedly, the comparison to The Walking Dead is a little weak outside of each game’s sharing of a hopeless, almost depressing state of affairs between the survivors of a ravaged world. Whereas Telltale offers you some agency in how the narrative unfolds and who survives, Dead Synchronicity is very much a traditional point-and-click adventure game.

I wasn’t too surprised to find myself stuck for a few minutes as I didn’t think to combine an item in my inventory with part of the environment. I always did hate that about adventure games. It’s the kind of puzzle that feels far too convoluted for the task it solves. I can’t say I’m too impressed by the dialogue options when in conversation either.

Despite those niggles, I gasped with wonder when time fractured and the screen crackled. I’m also enamored with Dead Synchronicity‘s expressive art style; the bold lines and exaggerated facial details evoke the cruel sensibilities of the surrounding world.

You can download the Dead Synchronicity alpha demo on this page. If you want the extended demo you can pledge towards the game’s development on Kickstarter.