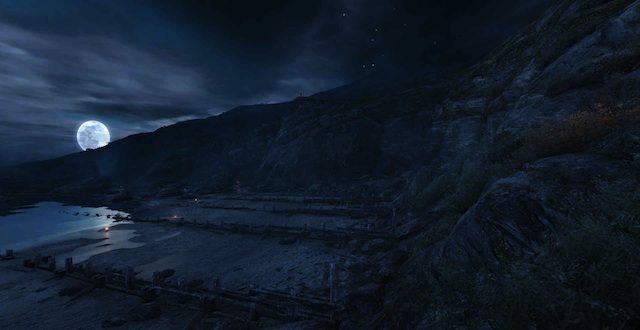 Dear Esther takes about two hours to play, if that. The game, first released in 2008 by developer thechineseroom as a Source engine mod, has since been re-released as a full game on Steam. The “experimental” game—and some have argued fruitlessly whether or not Dear Esther even counts as a game—puts the player in first-person control of an unnamed hero.

I feel compelled to remind you, brother gamer, before we begin, that this game is not for everyone. But that’s irrelevant. Since when is any game for everyone? This game has no win condition. This game has no loss condition. Just walk forward. Don’t jump—you can’t. Your leg is broken. You’re ill. Your wife is dead. You’ve come to this Hebridean island. You’re alone. You read aloud your letters to her. Perhaps to her ghost. Well, to yourself.

But this is not “you.” This is the man. Meet him: a tragic figure, seeking redemption, seeking release, at odds with himself. He is not some container character, waiting for you to fill him in with your “agency” and your “choices,” deciding all by yourself his personality and behavior. But who do you think you are? There are some things you can’t control. Learn to empathize with the man, and he will reveal himself to you. Follow him by leading him.

You almost feel the need for air.

If videogames are power fantasies, what is the source of this man’s power? Nothing obvious. Strength of will, for meticulously leaving artifacts of his story painted all over the island; for making his way up to the edge of that cliff; for taking the plunge. Or maybe there’s no power. Maybe it’s just callowness and defeat. Maybe this is the image of a man crumbling in the face of extreme personal loss.

You walk forward, and every so often, you trigger his monologue. Forking paths will trigger more and more fragments of his letters. He speaks. You listen. It all leads to the same ultimate end. The environment begs you move forward, but on some level, you want to stay a little bit. You want to take in the salty air. It’s a cliché to say so, but you almost taste it. You walk up a crag into a field of weeds and the sea pans out over the horizon. You feel like the man in Wanderer Above the Sea Fog looking out over a vast, devastating, consuming sea.

The caverns, the stalactites, the blues and greens and punctuated starry shimmer of the adjoining caves, are oppressively beautiful. You almost feel the need for air.

Nothing but a videogame can do this, regardless of how conventionally or obviously it is, in fact, a game. Nothing but a game can really guide you to feeling this kind of immediate empathy for the character. You don’t need to be a classically trained actor to feel connected to this man. Maybe you feel bored for a while, detached. Where are the encounters? Where’s the action? What do I do? You walk. You listen. The scrawling on the walls, the rusted, abandoned, discarded objects in the environment, help tell the story. There’s an economy here to the unification of the elements. Dear Esther is defined as a “ghost” story and yet the literal ghosts are not explicitly an element of the game. The “ghostliness” is a metaphor for what this man left behind when he came to the island, for all the failures he could never escape. It is a metaphor for the history of the island, deep and rich and full of fossils. It is a metaphor for his dead wife, whom he reads to. And it is a metaphor for the man himself, his cave paintings, and the refuse he leaves behind.

The environment begs you move forward, but on some level, you want to stay a little bit.

He reads more, reveals more, unifies his references to Paul on his way to Damascus and historical allusions with the nightmare of his life. There is nothing superfluous. The game does not over-explain, or over-expose. There’s a delay to this gratification. It’s—dare I say it—poetic. Its melancholy beauty is almost Byronic.

His breathing becomes staggered, his voice rises and resonates. He climbs, climbs, climbs. This is his story of redemption, of purification. In terms of literature, there is a type of conflict taking place here: Man versus himself. In games, this is rare. The interactivity of games revolves around an obvious philosophy of “doing something.” This makes games an active medium. You are not just an observer; you are also an actor. This nature, of action and reaction between the player and the machine, makes introspection hard to achieve. It requires a passivity that is easy to submit to as a reader or as part of an audience, but hard to accept as a player. Dear Esther jars at first in forcing one to relinquish this activeness, this agency. It compromises, giving you a limited framework within which to maneuver down paths, to explore; but you come to the same ultimate end.

All this is about the man, his contemplations, his meditations, his lamentations. You read on. He might be scared—terrified—but his voice suggests resolve despite it all. He must overcome himself. There is no going back because there’s nowhere else to go to. Try drowning yourself. You’ll just respawn. Try closing the game. He will be static. Nothing will be accomplished. The only way is forward. You walk. He talks. You listen. Now you know where you, the player, fit in.