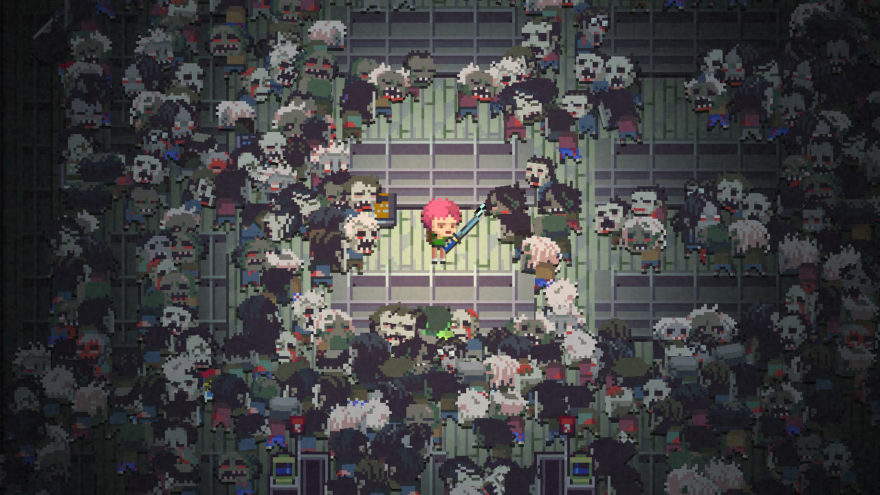 The only things moldier than a zombie’s jeans are complaints about the ubiquity of zombie-themed media. And yet, like a skeleton draped with liquified cold cuts wandering through the chapped streets of Any City, USA, here I shamble.

The zombie—a thinly-veiled metaphor for the monstrosity of humanity, and even more translucent excuse to commit acts of violence on human-shaped targets “guilt-free”—is worn past the point of darning. The subtlety of any pertinent commentary on race, morality, or the depths and heights of the human spirit in the face of such an insurmountable threat has long ago been cast aside. The iteration of the zombie these days is merely to render flesh more viscerally on screen, or to further debate the minute rules of viral infection, zombie land speed, time between bite and transformation, etc.

This isn’t to say that there might not still be marrow to be found in the bones of zombie fiction, but rather the messages have been subsumed by the medium—the undead have cannibalized themselves into a meaningless morass of putrefied symbolism. When surrealist poets realized they were in a similar situation, they took to randomization and games to reinvigorate their work, most notably in the parlour game (appropriately titled) Exquisite Corpse. Like all the finest early 20th century salon entertainment, exquisite corpse often carries house rules, but the basic idea involves a group of creative-adjacent revelers building a poem line by line without reading what the previous person wrote. This usually results in awkward, terrifying, ribald verse that draws giggles that can’t be replicated in successive readings because you really “had to be there” to get the full effect.

a meaningless morass of putrefied symbolism

In the early 2000s, the lingering memory of these nutrient-packed exquisite corpses fed the growth of avant garde Flarf poetry, a collaboration between writer and computational machine in order to disrupt one’s own habits of thought. There is something to be said for escaping the preconceptions of your mind to approach a greater truth, or at least a different perspective. Flarf poetry allows a poet to backhoe the richest soil of language, reaching new depths of linguistic inspiration that might never have been approached otherwise. Like the exquisite corpse, the majority of flarf is at best a springboard for further creative expression and, at worst, a pile of rancid unreadable garbage—no more meaningful than if the complete works of Emily Dickinson were electronically encrypted, but the key lost to the ravages of our upcoming zombie dystopia. For such work to carry weight requires something beyond the mere delight of strange new word combinations or surprising juxtapositions that lose their lustre after the first reading.

Which brings me to Death Road to Canada, a pixelated zombie story blended with The Legend of Zelda (1986), and other top-down adventure games. Given the utter disdain for both zombies and undirected literary generation I’ve outlined above, one would presume that Death Road made me instantly expel a dark ichor of disgust from deep in my lungs. But this game does not aspire to be anything other than playful and silly in the face of unrelenting destruction. Zombies are a dark frame for a playful jaunt, maintaining the decrepit aesthetics but forgoing some of the artificial gravity that weighs down self-serious zombie media. It’s not that zombie fiction needed satire or cheekiness to be rejuvenated, the problem with the classification is that it’s been transposed into nearly every form and genre, which has plucked its teeth. It’s those gaping sockets that Death Road plays in and around, foregoing any grander reading than a horde of zombies as the literal and figurative manifestation of death’s ceaseless march against us all, and seeing what kind of chortles we can get in the meantime.

The main mode of the game assigns the player a random pair of zombie-apocalypse survivors, who hear tell of the relatively undead-free realm of Canada, so they hop in a car and spit gravel to the north. Your time is split between passively driving (or walking the road if your car gives up the ghost) to advance relatively disconnected story beats and more actively exploring ruins for supplies, survivors, enduring a siege of zombies, or trading. Though you can adjust the rarity of events and companions, every playthrough will be entirely distinct—each beat is disconnected except as much as they are somewhat plausible scenes in a overarching doomsday narrative. Essentially, you are assembling an exquisite corpse Romero film, where the only direction that matters is forward.

Of course, it isn’t all mayhem, as characters have their own quirks and foibles that aren’t necessarily apparent but can be sussed out and will affect the adventurous choices you are tasked to make, primarily while driving. There are stats for strength, morale, fitness, and more, but these are only slowly revealed and improved upon as you go on, and they feel comically unintuitive based on the little information you are initially given for each partner. So like flarf’s search term-based poems, with little input and a lot of colorful noise you make the best educated selections for how successfully a person might react, based on their in-car interactions or previous feats in the face of erratic challenges. Yet, you will probably play so many rounds that these traits will blend together and you’ll either have to take notes or say “fuck it” and shoot from the hip, hoping something lyrical and saucy is teased from the noise.

you are assembling an exquisite corpse Romero film

Each character dies just when they start getting fleshed out, as per the requirements of zombie escapades. Sometimes this happens on accord of a mishandled encounter in the car, as per the rules of an exquisite corpse poem it is sweet chaos (and up to you, the reader, to make the connections): an injured moose that you probably shouldn’t have tried to either heal or kill pummels you, bandits steal your shit, you become exhausted from extraneous berry-picking, or interpersonal conflict shatters the team. There’s also my favorite of these unexpected events so far—a demonic possession out of nowhere, during which I sacrificed my companion for a Satanic muscle boost. We all died shortly after that anyways, without crossing over to the True North, but it was worth it. That said, possibilities such as that also make it hard to care about characters that are as disposable as the narrative framework requires.

The part of Death Road where you wander around swinging pipes and shooting uzis is fine, if nothing groundbreaking. It’s slow by design, meant to lend a sense of verisimilitude to the 16-bit survival-horror atmosphere. The momentum often stumbles to a crawl as your companions are at times unintentionally rendered computer-dumb and will get themselves stuck on the corner of a table or old junk car. Swinging a weapon also feels leaden due to its unreliable timing. The game sashays between a plod and a romp, where the charming silliness is put on pause for mostly dour foraging, which—if you’ll allow me to beat a dead lyrical device of a horse—is pretty much how reading an exquisite corpse poem works.

The few times I clawed close to the border of the Great White North, somewhat predictably, 75 percent of my group was consumed by the horde because I had the bad luck of drawing a particularly difficult siege of furious zombies before I was prepared. C’est la vie, and then it’s on to the next group of random survivors. And the next, and then the next. What matters is not the destination but the journey; not the finished poem but the act of getting weird with words at a party. There are alternate modes which allow you to reuse friends you’ve already found, offering an opportunity to better understand and remember them (and their stats), but you’ll want to avoid this at first so you can find as many of the super-powered and small-time weirdos as possible.

Death Road to Canada tells many small slapstick stories that end the same way. When it comes out on iOS it’ll be best situated for capsulated playthroughs and short mirthy smirks thanks to the low stakes. The joy in it, as in writing directionless poetry, is in the process rather than the explication. It doesn’t exactly crack open the full literary potential of randomly-generated story beats, but it does use it to an enjoyable-enough cutesy effect, which is pages more than most flarfy corpses have ever achieved.