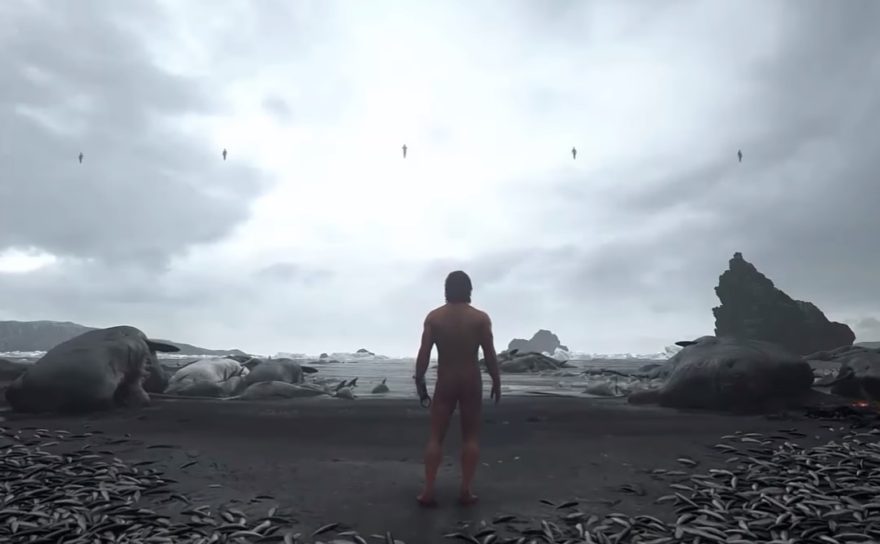 At the Sony E3 press conference last night, Kojima Productions unveiled its first game since breaking up with Konami—it’s a surreal action-adventure entitled (get this) Death Stranding.

Death Stranding features Hideo Kojima and Norman Reedus working together again, as the two had previously partnered up for the presumed-cancelled Silent Hills. Kojima’s projects and narratives have always been a touch odd, but with the release of the Death Stranding trailer audiences have confirmation that Konami was only holding him back. To call the trailer ‘different’ would be an understatement.

Is the game the baby?

The trailer features a naked Norman Reedus, curled up on a beach surrounded by dead sea creatures, and tied with a wire umbilical cord to a newborn baby. When he holds the baby it seemingly turns to oil in his hands, and then he stands—incision proudly marked on his belly—looking out over an ocean with a group of figures in cross-like poses over the water.

Was Norman Reedus pregnant? Male pregnancy is a frequent enough trope, from the domestic fanfictions on Archive of Our Own to the horror of the chestburster in Alien (1979). With the blackened oil and dead fish, it seems more likely that it would take after the latter rather than the former. Kojima has already dipped his toes into horror with Silent Hills, so his first post-Konami foray could easily be a horror game.

But then, is the baby real after all? Is the game the baby? Is Kojima the baby, birthed anew from Norman Reedus after his tumultuous break-up from Konami? There are no further answers here.

Death Stranding is set to be a PS4 exclusive and current has no announced release date.