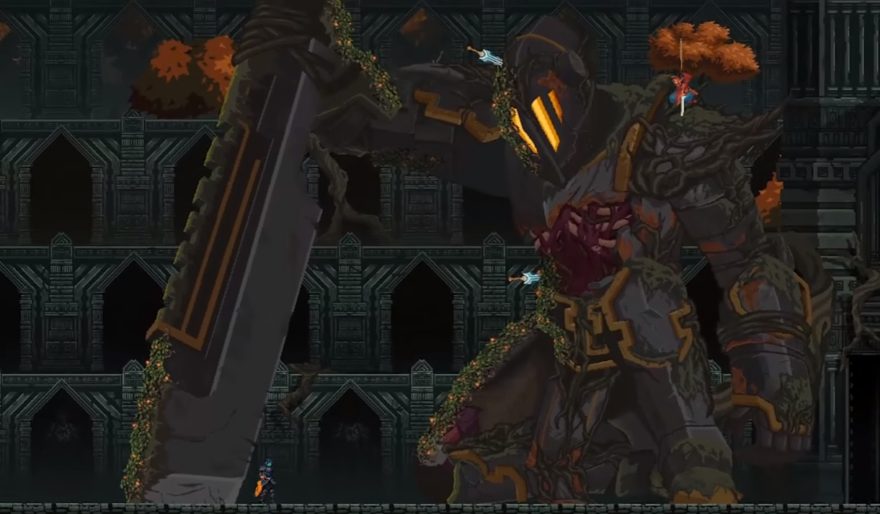 In 2014, game studio White Rabbit revealed what was perhaps the defining image of its upcoming fantasy action game Death’s Gambit: your mounted hero scaling the body of a gargantuan being, so massive that it loomed over the surrounding mountain range.

It was clear then that while the sword-and-shield combat and gloomy fantasy world was influenced by titles such as Dark Souls (2011) and the Castlevania series, the legacy of Shadow of the Colossus (2005) also—and perhaps most prominently—lived on in Death Gambit’s towering bosses. That point is only nailed home with the release of the game’s most recent trailer, 90 seconds of pixel-art combat and exploration that shines a spotlight on its colossal bosses and fearsome foes.


While Death’s Gambit may be confined to a 2D plane, the scale of its action and landscapes are striking. From the stone dragon monument arching over sunlit peaks at the start of the footage to the sword-wielding behemoth so large that its head extends beyond the screen, Death’s Gambit pits the player against overwhelming odds, enforcing the tense stakes of your encounters. It very much fulfills that heroic fantasy that special effects crews are forced to return to with every summer blockbuster—the latest iteration of the ancient Bible story, David and Goliath, in which the underdog overcomes their impossible foe with wit and determination.

Death’s Gambit contrasts this huge scale through action on the opposite end of the spectrum. As the player traverses the grisly confines of blood-drenched sewers and shadow-cloaked ruins, monstrous abominations lurk, feeding on dead flesh. They, too, appear to dwarf your protagonist, but this time it’s more through sheer fright rather than huge scale.

Death’s Gambit will be releasing on PC and PS4 in 2017. For more details, visit White Rabbit’s Tumblr blog and Twitter page.