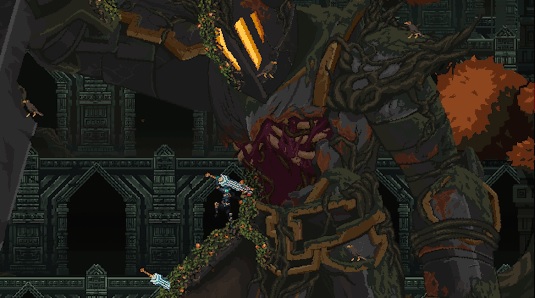 Death’s Gambit, the upcoming medieval action game from developer White Rabbit, likes to wear its influences on its sleeve. Like the recently released Salt & Sanctuary, it’s part Dark Souls (2011) and part Castlevania, sending players into a brutish world that could not yell “here be dragons” any louder. And yet, according to the latest post on the game’s development log, it also seems to have a tongue-in-cheek sense of humor amid all the danger.

The post itself is short, simply reminding players that the game is still alive and letting them know that they can expect a new trailer soon. With it, though, comes a series of new gifs mostly focused on the game’s shields. There’s one that lights up dark areas, and another with a parry that swats foes away like Jason Smith stopping a slam dunk. My favorite, though, might be the turtle shield, which instantly transforms the game’s stoic protagonist into a child hiding under their covers to escape from monsters.

Its official function is to block attacks from both sides, as the player cowers underneath a literal turtle shell while using it, but its effect is to give the game some tongue-in-cheek levity befitting its publisher, Adult Swim. Like Metal Gear Solid’s trademark cardboard box, it manages to find the humor in an otherwise serious world, and I couldn’t be more on board with it.

Death’s Gambit will be at PAX East later this April. You can find more information over on the game’s devlog.