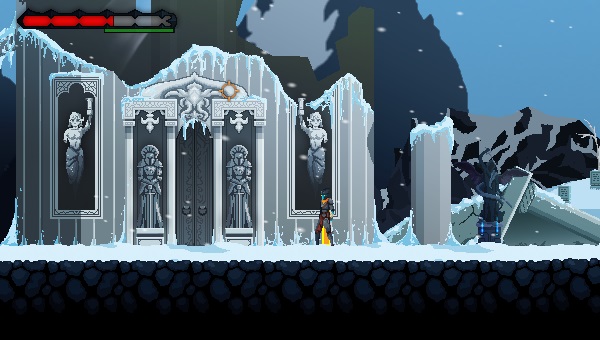 White Rabbit didn’t expect this to happen. Jean Canellas, programmer on White Rabbit’s upcoming game Death’s Gambit, was putting together a small build of their game to submit to IndieCade, along with a screenshot to submit to IndieCade’s Tumblr for Screenshot Saturday, a weekly showcase of interesting-looking upcoming games. White Rabbit posted the screenshot on their Tumblr as well, announcing that the game existed, and IndieCade, obviously liking what they saw, featured the shot from Death’s Gambit in their Screenshot Saturday post a few days later. When I talk with Jean and Alex Kubodera (Gambit’s artist), they sound slightly dismayed: “You’re the first one to actually talk to us about the game, everyone else just wrote up what they saw.” Which, considering that their website launched only a little over a month ago, wasn’t a lot more than a few blog posts and a mostly empty TIGSource developer log.

None of which is to say that the discussion was unwarranted: Death’s Gambit does indeed look great, with an art style that echoes the work of Dark Souls’ Daisuke Satake by way of Superbrothers’ Sword and Sworcery. But the lack of information about what all those pretty .gifs actually are meant that most people were left guessing. This also meant that most of my assumptions about the game were only half right.

To start, despite their alluring .gifs and screenshots, the Collosi (“Gaians,” as White Rabbit calls them) are not the focal point of the game. Rather, these are just one of many boss types that will populate Gambit’s world. At the start of the game, the protagonist makes a deal with Death that, if he roams about the world and kills off the other immortals (bosses), he himself will become immortal. Hunting these immortals down is your primary motivation, and in exploring the spaces between them you’ll discover more and more about the world your character inhabits.

The game is also not a horizontal exploration game a la Paper Mario or Limbo—think more in the realm of Metroid or Castlevania, with verticality playing an important part of not only in traversal of the world, but also when fighting enemies like the aforementioned Gaians. Kubodera elaborates: “We want the entire journey from his foot to his head to be part of the level progression and to tell its own story of how the Gaian inhabits the world.” Canellas says that the giants aren’t the only type of Gaian, that “the boss battles are all very different from each other, and the majority of them aren’t climbing sections. The giants are only one of the ‘colossal scale’ encounters we are imagining.”

Killing bosses and other enemies, as well as exploring hard-to-reach places in the world, will net you gear and other items, whose properties and functions are planned to tie directly into the overall theme of the game — that of something desperate. Their early screenshots of an ice level stood against this idea, but Gambit may not all look like those early shots implied.

Kubodera explains, “The entire ice area was built because we thought we needed something lighter, and what happens if we clash that with something darker. Each section of the game is kind of its own little world. They all have different color palettes and environments.” Despite the riot of color in their revealed environment, Death’s Gambit is planned to have areas that “should make you feel pretty miserable.” Using their current screenshots to judge the game then would be like judging Deafheaven by their pastoral interludes alone and not the searing metal that composes the majority of their work. They’ve certainly captured attention with the little bit they’ve shown so far, but it’ll be interesting to see where else they take us.