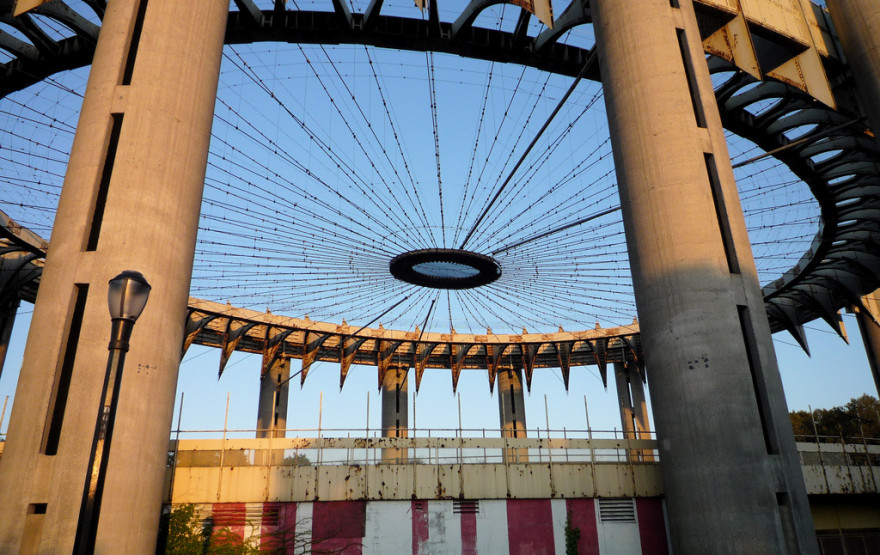 In 1964 and 1965, people flooded into the newly built, brightly-coloured New York State Pavilion in Queens, N.Y., to get a glimpse of new innovations, like telephone modems and computer terminals with keyboards, for the 1964 World’s Fair. Today, the New York State Pavilion resembles the ruins of an amusement park. The colours of the Tent of Tomorrow have faded to an eerie murk of “what-used-to-be,” the roof, which used to resemble the interior of a 1960s home, has been completely blown off, the world’s largest map of New York sprawled across the floor has been obliterated and the space surrounding is pretty much desolate, save for a few wandering souls. Today, the New York State Pavilion serves as a crumbling representation of the ‘60s envisioned future.

The pavilion was built by architects Lev Zetlin and Philip Johnson between 1962 and 1964, and is composed of three different structures: the Tent of Tomorrow, the Astro-View Observation Towers and the Theaterama. The Tent of Tomorrow was used as a performance space and housed the exhibition. The Astro-View Observation Towers, which are now completely inaccessible, provided an overhanging view of the tent and New York City, the highest tower standing at 226-feet. Theaterama, which used to house a 360-degree panoramic film, is the only structure that has found any use today (other than providing the scenery for movies like Men in Black and Iron Man 2), housing community theatre Queens Theatre in the Park.

So, it hasn’t been completely desolate. People have ventured inside to explore the different areas. It opened to the public for it’s 50th year anniversary in 2014, only to require those who took the tour to wear hardhats because of the structure’s instability. That being said, the structure still needs a ton of work to be fully open to the public.

$40 million will provide much needed upkeep for the pavilion

To return the pavilion to its former state, more than $40 million will have to go toward refurbishing and stabilizing the structure, though, it’s not without its supporters. Matthew Silva, a school teacher from Long Island, co-founded People for the Pavilion, a group trying to raise awareness about the benefits of restoring the structures, and created a documentary, Modern Ruin, released May 22, about the history and the potential future of the pavilion according to New York Magazine. Last summer, the Met donated a portion of their ticket sales to the remodeling of the structure, according to the New York Daily News, and later this year the pavilion will receive a paint job at no cost.

The real task seems to be placed in figuring out the use of the pavilion. There has been no formal proposals for the use of the venue. Silva suggests the venue have a public-private ownership, and serve as a venue for concerts and weddings one day, while being open to the public the next. Whatever the use is, here’s to hoping we never find the truth behind observation towers.