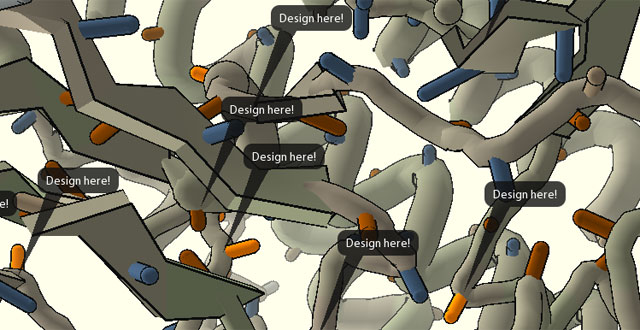 Game design is a process of inventing problems. How do I get to the big tower on the horizon? How do I unlock the door to the next room? How can I get through a firefight with only 100 bullets? In some ways, this is a perversion of the innumerable problems that already surround us.

Foldit is an experience that joins the diverting lightness of play with the inescapable heaviness of real-world problems, allowing players to build model protein structures in a game environment. This unusual amalgam has led to the discovery of the molecular structure of an important enzyme in retroviruses, a group that includes HIV. I spoke with Seth Cooper, a member of the University of Washington-based team that runs Foldit, about this latest discovery, the benefits of human intelligence against computers, and the nature of play when applied to real problems instead of imagined ones.

One of the most interesting ideas in Foldit is that human intuition can still perform better than a supercomputer in terms of seeing patterns and analyzing failure. How exactly does this work?

When a computer does its search for the correct protein structure, it’s basically making random moves with the protein and then making random changes to see if they create better structures. But people have this ability to look at these structures and think about how pieces might fit together at a higher level. They can stick with changes even if their score gets worse for a little while, whereas the computer would just get stuck or give up if it sees its score getting worse. A person can stick through it and get to a place where the score actually gets better, and in that way they can end up with the better folded structure.

About a year ago we had another paper that compared the players of Foldit with the state-of-the-art computational method at that time. Our paper basically showed that for particular kinds of problems that required structural rearrangements in the protein, players were able to find better structures than the computer was. This year we were able to take a problem that had been unsolved by experimental or computational methods. Scientists had been working on this for many years, and they asked if we could help them solve this structure. We gave it to the players and they were able to come up with the right answer.

What distinguishes Foldit from other crowdsourced research projects, like the Guardian‘s recent project that involved readers in parsing 24,000 Sarah Palin emails? Is Foldit really a game, or is it work made minimally laborious?

Biochemistry is kind of a daunting area of science, but we wanted to try and make it fun and approachable to as many different people as possible. We found that many of the top players don’t have any background in biochemistry, so I think that by making it a game we were able to broaden the audience of people who would be interested in getting involved. The game also has a really good incentive structure, which is a good way to motivate players to stay involved for a long time. That’s important—to bring the players in when they don’t necessarily know anything about biochemistry and get them to the point where they’re sort of experts in the part of biochemistry that’s presented by the game, so that they can actually make a novel discovery or scientific contribution through the gameplay.

The scores, the feedback for making good moves, and the long-term rankings and leaderboards on the website are a good way to help keep the players involved and keep the community evolving. Many other games that use crowdsourcing are often focused on image recognition or labeling—things that people are definitely good at, but don’t fully leverage some of the deeper problem-solving abilities that people have. The puzzles in Foldit are definitely very challenging; it’s much more difficult than image labeling and those kinds of problems. Only a game can have rich and dynamic incentive structure that can keep people for a long period on time as their skills and expertise build. Foldit was designed to maximize this stickiness through standard challenge and collaboration incentives, but also to maximize social praise and interaction, to recognize and award multiple ways people can excel and develop, and to allow for transfer between extrinsic awards like points and ranking to intrinsic awards that come from caring for the game community and what they’re accomplishing.

Foldit was originally released in 2008. What’s changed about the game over the years? What have you learned from its ongoing development?

The game is always changing and evolving. We’re always adding new features. For this particular result we’d just added a new feature called the Alignment Tool, which lets players take pieces of other structures and kind of stitch them together. That’s actually a tool a scientist uses, and so we wanted to take the tools that expert scientists use and get them to a point where players can use them effectively as well.

Have you learned anything from this newest discovery that will guide any new additions to Foldit in the coming year?

The obvious sweet spot in this space is creativity, an area where computers will remain inadequate for a very long time. One of the things we’ve started to add recently is the ability for players to design new proteins, that don’t actually exist in nature, that might have new and interesting functions for scientists. One thing we’re looking at is disease inhibitors. Right now we’re running a series of puzzles where players are able to design a flu inhibitor. We’re able to take the designs the players come up with in the game and test them in the lab, to see if they’re able to actually to help fight these diseases. We’re also working toward drug design through inventing new synthetic proteins. And we’re working on a new game where people can create nanomachines from small DNA sequences. It’s kind of a Tinkertoy set on a molecular level, that allows you to create walkers and transporters that can move atoms and molecules from one part of the cell to another. We think it will be even more fun for people.

Do you have any data about how long your players stick with the game? Is there a core group of long-term players?

There certainly is a fair amount of turnover with players. There is a set of introductory levels that introduce the game to players and take them to the point where they’re able to compete in the high-level scientific levels. A lot of people just stop at the intro levels and don’t make it to the competition levels, but there’s a core group of a couple hundred players who are consistently online, solving puzzles and working. Those are the kinds of players that are able to make these kinds of contributions. We’ve had over 400,000 people play the game, but in the case of discovering the structure of this particular protein, we had about 600 people playing that puzzle.

Who are these players? Do you have any personal or demographic information about those players?

We’ve done some demographic surveys [PDF] on the website, and we found that a lot of players, and particularly the top players, don’t have any background in biochemistry beyond maybe a college course or something like that. They’re not professional biochemists; it’s a lot of non-scientists playing the game, which is a really exciting thing. They’re also not really what is thought of as a typical game player. We have people of all ages, from all around the world—musicians, electricians, retired grandmothers, 13-year-old kids and things like that. It’s a puzzle game; it’s not something violent, and so it can have a broader appeal.

One of the challenges of game design, especially for community-based games, is how to deal with griefers and people who don’t want to play by the rules. Have you thought about any of these problems as the game keeps growing?

As far as the social elements, every now and then you get someone with an inappropriate username, or who goes into chat and says inappropriate things. There have also been issues of a player defecting one group for another, and taking the secrets with them. The momentum of players genuinely caring about the game and community seems to self-regulate these things, at least so far. We hold chat sessions with the game community and try to figure out how to best deal with new issues as they come. But as far as the scientific results, the more people you have the better. There’s more creativity, problem solving, and more potential for one of those players to have an insight to solve a scientific problem.

Images from Foldit via University of Washington