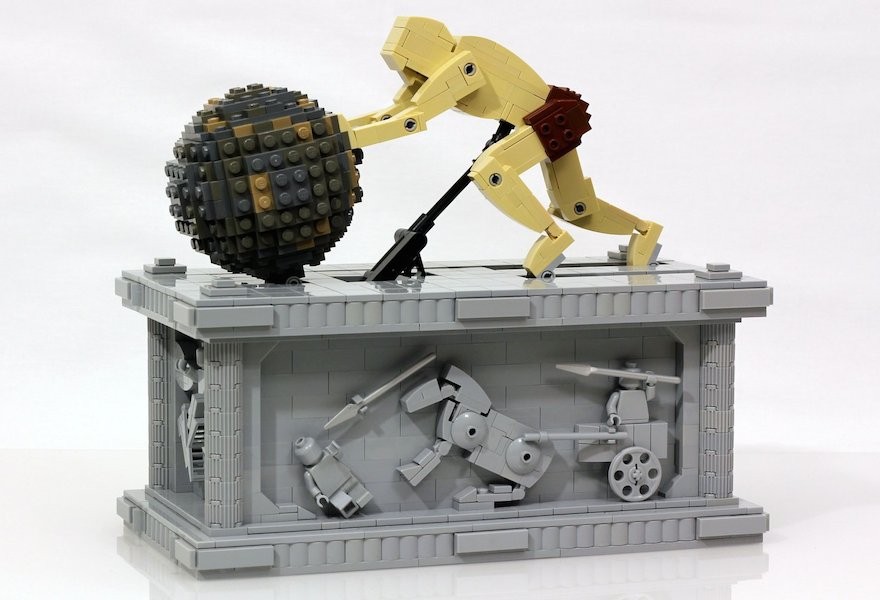 When I first saw JK Brickworks’ “Sisyphus Kinetic Sculpture,” I was floored by how smoothly it moved. My primary experience with LEGO, like many, was as a stationary medium, and yet here I saw a piece of art made entirely out of LEGO bricks moving with the fluidity of a Disney animation. As I was to discover on JK Brickworks’ site, this immediate comparison is no accident, as the project was inspired by a 3D modeling program from Disney Research that allows both artists and non-experts alike to plan out mechanical characters in a virtual space before constructing them in the real world.

The sculpture, which features the Greek mythological character Sisyphus pushing his trademark boulder, as well as a Greek relief art style retelling of his life built into the base, is made possible thanks to a surprisingly simple, albeit still impressive, system of gears and pegs. It can be powered either through a battery and motor or by a hand crank, to give the operator that true Sisyphus feeling. Turn and turn and turn, that boulder’s not going anywhere.

Jason Alleman, who founded JK Brickworks along with his partner Kristal (from whom the ‘K’ in the name is derived), writes over on their site that while he has been a LEGO fan since his childhood, his adult fascination with the project really began when LEGO released their Mindstorms programmable robotics system and acquired the Star Wars license in the late ‘90s. Now, Jason, Kristal, and their friends create mind-boggling LEGO builds like their Sisyphus sculpture on a near-monthly basis, most of which are mechanical in nature. Together, the team has built such projects as a working combination safe, a functioning AT-TE walker from the Star Wars films, a cookie icing machine, and a giant model spaceship entitled the NCS Aries-K, complete with spinning gravity generator.

To see more moving LEGO sculptures and even find instructions to build many of them yourself, head on over to JK Brickworks’ site.