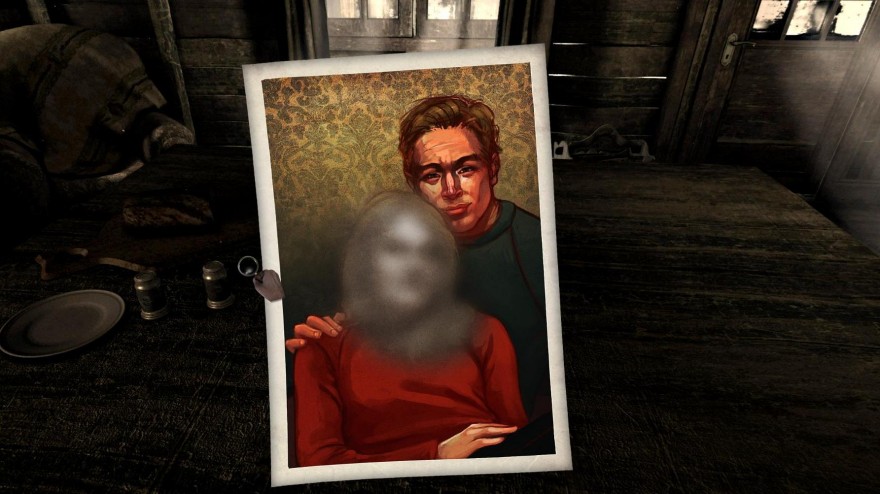 At first, this question is asked innocently enough, as part of the narration of the husband you play as in Serena. As you search drawers and bedside cabinets for any trace of her, that same question gradually moves from murmured concern to flustered panic.

Nothing physical actually changes inside the dilapidated cabin during the half-hour breakdown that comprises this game. All the changes take place mentally, as you gradually piece together the truth.

The smudged face of Serena in a treasured photograph becomes clear once you’ve found blonde hairs in a comb on her dresser, and read a poem hung on the wall that conjures up images of “ice-blue eyes.” Remembering her face is the first step towards accepting what happened, or rather, what you have done. It’s a grim realization.

The question you’re eventually left with is: Where does the blame lie?

Perhaps it could be attributed to cabin fever. A loving couple escape to the woods with romantic intent but turn stir-crazy over the months. Indeed, the passing of time is a central motif in Serena, as the constant tick-tock of the cabin’s clock stabs into your mind like Poe’s Tell-Tale Heart.

But following the route of insanity is being too generous towards the husband. What you find out is disturbing enough that it doesn’t come with the comfort of such an excuse.

The 40-person team that contributed to Serena are among the victims of Paul Trowe.

What makes it all so personally troubling is that the game is a metaphorical recreation of something that actually happened. The 40-person team that contributed to Serena with music, writing, and deeply personal book titles (found on the bookshelf in the cabin) are among the victims of Paul Trowe, the former president of Replay Games, who confessed to showing a pornographic video to a minor last year. In the aftermath of that crime he lashed out on Twitter, divulging private details of friends and fellow developers and spreading lecherous claims about others.

One person who had a particularly hard time with Trowe’s self-destructive efforts is a woman named Serena. The game is paying tribute to her.

Serena isn’t just an engrossing back-and-forth rifle across an idyllic retreat turned haunting hut. It’s a collaborative project weaved by a community of developers who have transferred their shared pain into a powerful allegory.