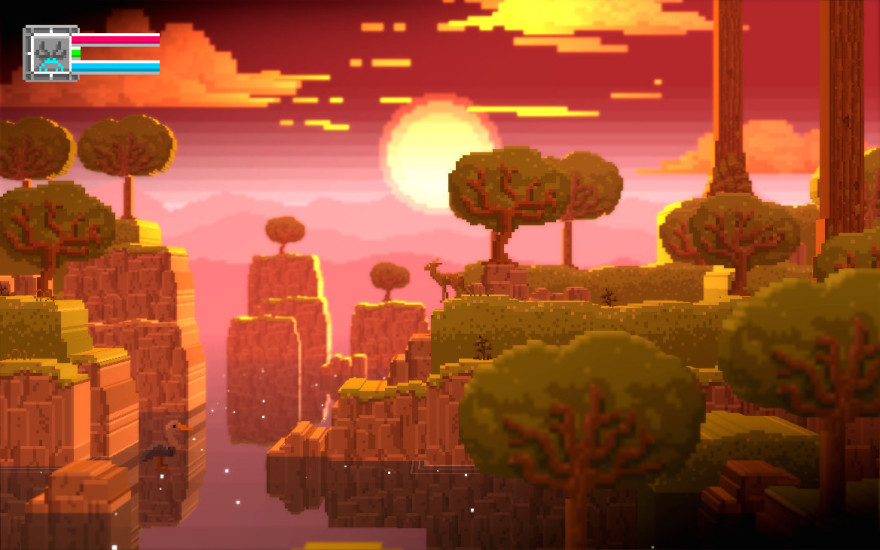 Calling a videogame “artificial” reeks of tautology. It doesn’t really get at anything meaningful, does it? You might as well call music “melodic” or film “visual.” That’s the foundation, but every game builds on its foundation differently.

All the same: ironically for a game that preaches the transcendental majesty of nature from its opening scene, The Deer God is brought low by artifice.

You begin the game as a hunter who accidentally shoots a fawn when a wolf attacks and kills him. He is then brought before the titular Deer God, who tells him he must redeem himself or face the consequences. He is then reborn as a fawn.

Strangely, your path from there will involve a whole lot of animal murder as your fawn becomes a deer and your deer becomes an airbrushed Frazetta violence-god, blasting lightning from its antlers as the world burns around it.

There’s a weird implicit hierarchy of animal lives here: porcupines, eagles, foxes, alligators, snakes, piranha all get stomped to death beneath your fawn’s downy hooves. But kill an “innocent” animal—a non-carnivore, I guess—and your karma meter gets dinged. Isn’t all of nature worth preserving? Or perhaps the deer and their God value their kin above all else, in the same way that humans easily place themselves atop the animal kingdom.

Isn’t all of nature worth preserving?

The Deer God’s largest failing is its unwieldy mix of tropes. In a narratively elegant but practically frustrating move, each time you die, you either start over or are reincarnated into one of your offspring, making sex a de facto checkpoint. This is a game about being reborn and all, so that’s a tidy move, like making the dom-sub relationship in Anna Anthropy’s Mighty Jill Off reflected through the game’s difficulty. It ties what the game is about into how the game plays, which is always a uniquely exciting thing.

When you’re actually playing, though—it’s a drag. The levels are randomly generated, so you’re not running the same gauntlet over and over. And it looks nice, all warm light and chunky pixels. But there’s no escaping that getting dumped back to the start every time you die is an unwieldy roguelike flourish. It robs that pretty world of consistency, of the chance to explore and learn its contours. Instead, it’s like leaping over the trench only to catch a bullet before you make it to the other side, every time. It’s not only frustrating in a toss-the-controller sense, but also because it suggests the game isn’t as smart as it first appeared. I don’t mean to suggest there’s no life left in well-worn devices. The Deer God just doesn’t need those devices. It’s got a great idea at its core: exploring the relationship between humans and nature. That tidy symbiosis between narrative and play evinced in the reincarnation mechanic could have been extended to the entire game, directing every aspect toward the game’s self-professed mission of enlightenment.

The apex of this idea is Shadow of the Colossus, where the entire game curves toward a theme like a plant toward the sun. Colossus’s narrative is a low-level hum, ambiguous and driven mostly by the inexorable desire of a videogame player to go here and kill that. There are subtle cues to the nature of the player’s relationship to this world—the way the first colossus is walking away from the player, the shattering majesty of their deaths—but nothing overt.

When it eventually twists that compulsion into something terrible at the end, the player both learns what the game was “about” and also learns what games, in a broad sense, could be: what they could do.

That’s a lot to ask of any game, but sadly despite its lofty aims The Deer God doesn’t gel, doesn’t coalesce in any holistic way. Its disparate parts don’t align toward the same end: the karma system doesn’t mean anything here , just like the pixel art doesn’t mean anything, and the roguelike bits don’t mean anything. They’re tangential to theme and subtext and meaning. They’re words that don’t string together into a coherent sentence. This is not in itself damning, but The Deer God could’ve been more than dumb fun, and it wants to be more than dumb fun.