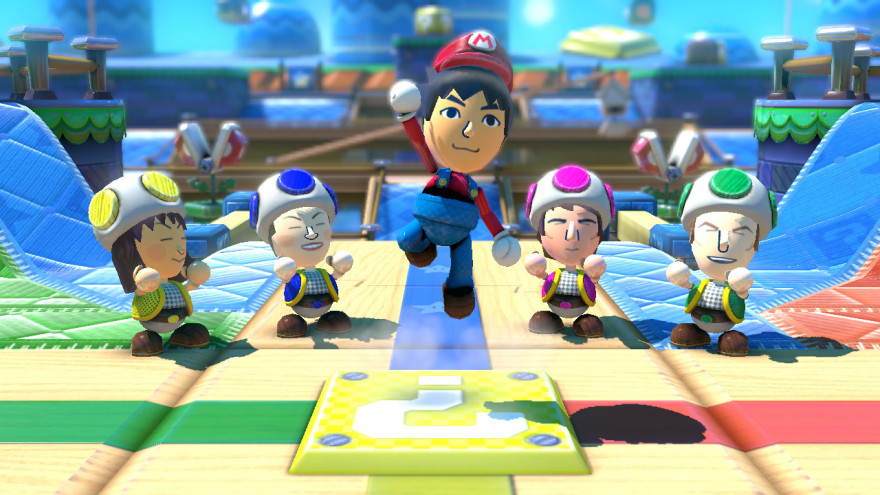 Twenty years ago, in a field miles outside Beijing, workers placed the first bricks of Wonderland. This was to be Asia’s largest amusement park. Expectations were as high as the castle’s largest turret. This would be a place for everybody: families, young couples, curious tourists, grandparents and grandchildren. A place where dreamers gathered to see their night visions made tangible. A place of wonder.

In 1998, construction stopped: nobody cared enough to keep the dream alive. In May of this year, the last remnants of the park were torn down, the field beneath returned to farmers who once made a living planting crops on what had become false promises. Which brings me to Nintendo Land.

The Wii U’s unofficial “relaunch” began last month with a new price point and a bundle including The Legend of Zelda: The Wind Waker HD. Future bundles are rumored to replace this with the recognizable New Super Mario Bros. U, and two new packages have been announced for Japan that include either Wii Party U or Wii Fit U. In each of these cases, the original pack-in, Nintendo Land, is cast aside, a tacit admission that the game did not work as intended, an experiment that left the laboratory and, in the clumsy hands of the unaccepting, exploded with a dull crackle.

For many this is fine news, a wiping-clean of the hands: “Good riddance,” they might say. “Who liked playing Octopus Dance, anyway?”  And here is where the author looks left, looks right, sees a valley of unrisen hands, and into that bare sky raises his own, proudly and without shame. If Nintendo Land is to be kicked to the curb, let us look at what it was, and, if more players had given it a chance, what it might have been.

The game is categorized in that most unsavory of genres: “Mini-game collection.” The epithet itself caused many to scoff at the game immediately after its somewhat uninspired reveal at the Electronic Entertainment Expo in 2012. Upon its release, critical reception was fairly positive. Anecdotal evidence, though, suggests many took one look at the saccharine world presented in Nintendo Land and recoiled.

On one popular podcast during the Wii U launch, I heard a critic complain about one mini-game’s hand-holding tendencies, specifically a message flashing on the TV telling you to look at the GamePad. Many of the games make use of the main television screen and the new controller’s screen, necessitating a switch in focus between the two. He felt ridiculed for being talked down to: If I want to play looking at the TV, he said, why can’t I?

Well, he could. The message goes away after about sixty seconds, and once the initial tutorial ends it never appears again. He had played it once, been irked by its asking of him something different or unexpected, and never returned, basing his opinion on presumption and bias. So many have moved on from Nintendo’s charms that they’ve lost the enzymes necessary to enjoy their taste, like a vegan whose first bit of steak in ten years induces vomiting.

It may look like a Nintendo-sponsored Disney World, but such an air of safety is a feint; this Land is a torture chamber.

Nintendo themselves seems to have moved away from complicated flavor combinations, instead pumping the release schedule (and the Wii U hardware boxes) with comfortable, easy-to-swallow experiences. But Nintendo Land, for all its soft, palatable appearance, is in fact a devilishly hard game. I’ve spent over forty hours within its gates and have yet to find every buried secret. There exist entire courses locked beneath its initial offerings, like some Matryoshka doll made of Chinese finger traps. This is no place to skip through, lackadaisically nibbling cotton candy. It may look like a Nintendo-sponsored Disney World, but such an air of safety is a feint; this Land is a torture chamber, a mad scientist’s lab pumped full of laughing gas. Linger too long and feel pain.

Oh, but what good pain it is! You’re welcomed in with a dozen attractions, each sporting familiar faces and comforting names. Only after beating an initial offering does the true challenge reveal itself. Take Donkey Kong’s Crash Course. You roll a triangular wheeled device down a series of ramps, using switches and levers to manipulate the track underneath. Tilting the GamePad controller right and left alters the cart’s momentum. After a few tries, if you’re lucky and deft of hand, you can make it to the end where a chalk-drawn Kong awaits. That wasn’t too bad, you say.

Ah, but what’s this? Another door is scribbled into the scene while the track malforms, allowing passage to this new entrance. Roll yonder and poof; the entire course flips and behold, a second set of obstacles is revealed. This course is tricky. You spend hours in its thrall. Certain spots seem impossible. It took me weeks if not months to finally master the layout. When I did this time, the chalky Kong drops as he did in the original game, cracks his skull, and the screen fills with colored confetti. But this is a false celebration. The screen flips again. There is a third challenge. Complete this stage if you can. Behind it lies another.

This kind of layering extends throughout each of Nintendo Land’s attractions: What at first appears like a novel, if simple diversion becomes a most diabolical gauntlet, escapable only through many near-misses and a complete mastery of what came before. Even now, ten months after first playing, I lose repeatedly, stymied by the bonus missions in Zelda Battle Quest, the third level in Crash Course, the later excursions in Balloon Trip Breeze. Nintendo Land is like that flower shop that smells of honey and roses, its front room resplendent with shimmering petals and a sweet pungency, before you open a hidden door down into the cellar and see coffins filled with soil. You realize you never fully understood where all these plants were coming from. And nobody ever would unless they looked hard enough.

Each attraction is a flagrant (d)evolution of another classic franchise.

Nintendo is almost too good at appealing to a wide swath of its audience; with such broad appeal comes an understanding that the pool is necessarily shallow. Then, when they subvert expectations and the floor underneath sinks into the abyss, you’re unprepared. What looked like bathwater was instead a whirlpool. Many never step in, uninterested in what appears tepid and calm. Those who do are soon sucked under, the unexpected challenge over their head.

If that’s one metaphor too many, it mirrors the game, which is overstuffed with things that appear to be other things. Each attraction is a flagrant (d)evolution of another classic franchise: sometimes familiar but stripped down, like Metroid Blast; or altogether odd, like Yoshi’s Fruit Cart, using a famous name to mask something entirely new. Even the aesthetic is two-toned: Nintendo’s games appear, for the first time, in brilliant high definition, and yet menus spout chiptunes and pixel art. The park’s main plaza teems with strangers’ Miis, all announcing their own message to the world via cartoon bubbles above their heads. Coins gained through completing tasks earn you statues culled from the attractions themselves, strewn haphazardly about the plaza. The whole smorgasbord intoxicates.

Even as I explore my well-trodden park I make new discoveries. Until last week (again: ten months after release!) I never knew you could skip to unlocked extras in certain games, bypassing the rudimentary first stage. Hold the L and R shoulder buttons while entering the attraction, and voila, you’re whisked to the later, more challenging task. Warp Zones exist beyond Super Mario Bros., friends, and remain as well-hidden.

Nor did I realize basic rules of play. Did you know the self-propelled wind-up car in Captain Falcon’s Twister Race, based on the F-Zero franchise, had brakes? The game never tells you. But sure enough, simply tap the GamePad’s touchscreen and your car slows. It’s a small inclusion that, nevertheless, allows for a more nuanced approach to another game many ignore but I can’t stop playing, its devious track layout and one-hit death combining to stump me again and again. If this ain’t your speed, there’s eleven other games waiting, each more complex and worthy of investment than their makeshift appearance promises.

Last December I was smitten and surprised enough to call Nintendo Land my favorite game of the year. After nearly another 365 days, I still wander its halls, though I fear I do so in solitude. With new Wii U owners getting Zelda, Mario, or Wii Fit with their system this holiday, I worry few will seek out this unabashed celebration of a company’s rich past as seen through the lens of their hopeful future. Now’s your chance. Dive back in. You’ll find me there, absorbed deep within its wily catacombs. Outside, footfalls echo through another empty palace, largely forgotten.