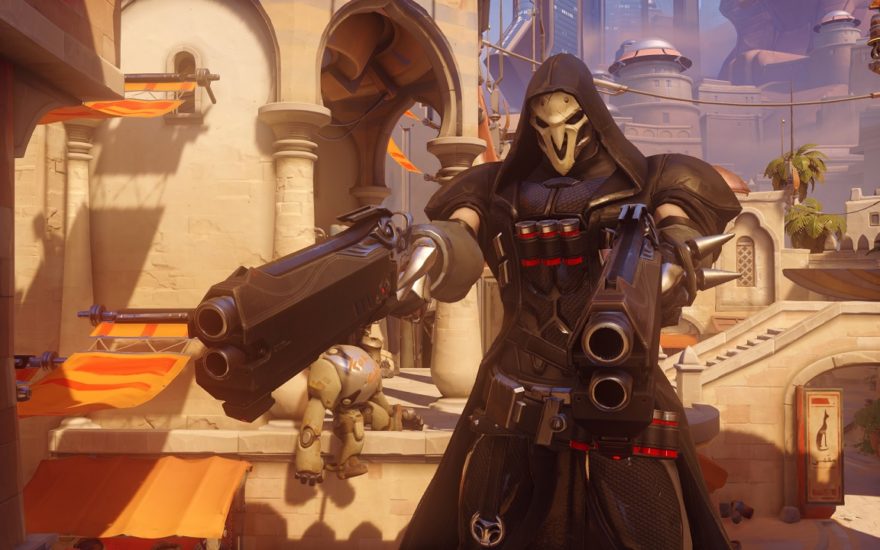 If you were 13, a touch weird and based out of the semi-rural Midwest, you didn’t choose the mall-goth life—the mall-goth life chose you. When Overwatch came out earlier this year, the part of me that still lusts after Tripp pants, Evanescence, and black nail polish rejoiced. Reaper looked pretty freaking sweet.

Being on the outside of the game, my primary interaction with Reaper has been through Tumblr fanart (he’s totally dating Soldier 76, right?) and YouTube plays. I know he drops his guns like the clothes of a horny couple in a movie getting ready to slide into the horizontal tango, sometimes with hilarious results. Or that when he has a play of the game, it has a tendency to seem effortless even as he emotes. It’s little wonder that he’s a character so noted for the type of player that plays him that there’s an entire account dedicated to “Reaper Names.”

He can’t help that he’s got a touch of mall-goth in him; he was drawn that way. These kinds of characters, meant to be dark and moody, are in most ensemble games. Take League of Legends‘s (2009) Cho’Gath, a hellbeast who constantly complains about the light of the sun. Reaper, his voice modulated but gruff, grunting out “I am the Angel of Death” as he lays down a five-layer deep kill streak, is perhaps a bit better than Cho’Gath screaming “You have stains upon your soul,” but really that might be because of the quality of voice acting Blizzard is employing rather than the line itself. A pantheon of heroes isn’t complete without one guy who just missed out on a Hot Topic sale and is a bit pissy about it.

Of course, this being Blizzard, all of those aesthetic choices are connected to internal lore. Reaper is actually Gabriel Reyes, former veteran of Overwatch, mercenary and someone who’s in a constant state of decay and regeneration. His mask has been credited as having been designed after the ultimate edgelord symbol, the rams head, but perhaps the best connection is tied to his Afro-Latinx roots in Los Angeles and the barn owl. Meso-American peoples often associated the barn owl with death and destruction and it makes a fitting mask for a man who is not only a bringer of death occupationally, but also seems to be constantly dying himself.

But then, aren’t most traditional symbols to which pubescent angst-queens attach themselves actually quite tragic? Brandon Lee in The Crow (1994) or the tragicomedy of Jack Skellington nestle well alongside the mythology of a grouchy mercenary who brings death in a blossom.

Genji – Genji is with you
McCree – Who you kidding? McCree is Overwatch‘s true shooter
Pharah – Don’t play fair, play Pharah, exclusively
Soldier 76 – Soldier 76 is here to make everyone else look good
Tracer – A series of limericks about Tracer, because why not