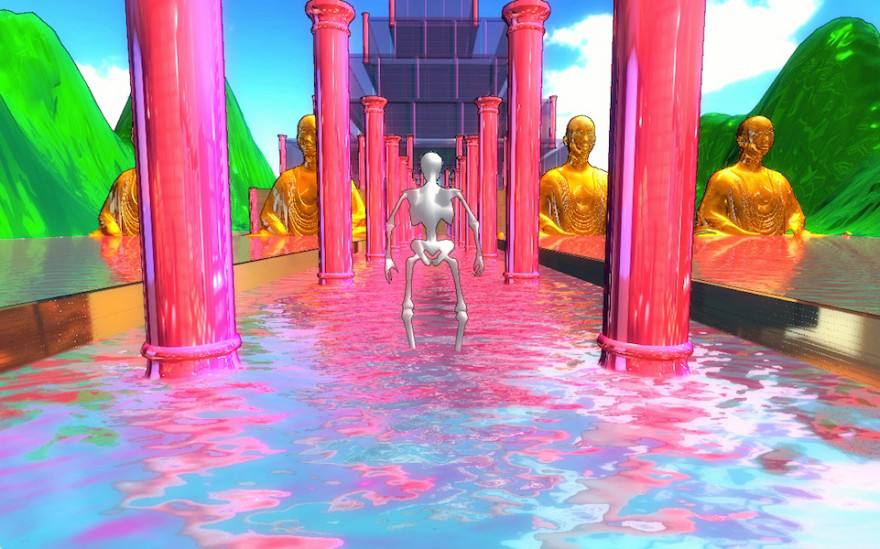 Kyttenjanae depicts loneliness and sickness in an unusual way. It’s almost always as a rainbow-flavored mix of gross-out and grace. The signature animated art that she shares on her Tumblr page is recognizable for the eyeless humanoids that ebb and flow as if made of pink and polychromatic liquids. They strangle themselves and puke out their sherbert innards from mouths and arse, some hang limp out of computer monitors, or see their bodies morphed by a technological ripple of neon lacquer paint. Whatever the case, they’re all forever trapped in endless torture by the looping gif format.

Her work has the shocking taste of Cronenberg’s explosive body horror, yet Kyttenjanae transports it to a universe where it gets smeared in pastel paints and coated in gummy candy. It’s an odd mix but one that might make sense. If anything, Kyttenjanae’s work seems to be an idiosyncratic spin-off of vaporwave. We understand vaporwave to be an exploration of the hyper-capitalist aesthetic of the 1990s and its rich tech-futurism symbols. It’s all spinning dollar signs, Windows 95, and low-poly models drenched in the language of the super rich—palm trees, “paradise,” Greek busts, and gold chains. All of this is rooted in the corporate commercialism we see around us even today albeit with its hi-tech enthusiasm and pristine artificiality ramped up to a euphoric high realized in luxurious pinks and purples.

What vaporwave seems to envision is an accelerated virtual world in which only the shiny symbols of advertisements, money, and consumer technology remain. Yet, as awful as that might sound, the bright colors and glittering visuals of vaporwave make this appear as a utopia. Kyttenjanae seems to take this outlook but instead of focusing on non-human subjects, as vaporwave does, she visualizes what would be left of us in this tech-futurist world. According to her, we’re lonely husks, separated by the technology that’s supposed to bring us together, sick with consumerism and seeing our bodies helplessly morphing and frazzling. One gif of a spinning iPhone with the word “Alone” printed across its screen is perhaps the best icon for her entire work.

But Kyttenjanae’s art isn’t tied down to the format of the gif. Being a multimedia artist, she has expanded into video work, websites, and videogames. She’s been able to show off this spread of talents more readily as of late due to a new website design. In conjunction with this relaunch she publicly released a game of hers called Apoptosis that she has previously shown at Holographic 2014 and other live shows and concerts. Now it’s available to download for Mac or to play in your browser.

an act of transgression in other videogames

As you’d expect, Apoptosis fits under the pall that covers the rest of Kyttenjanae’s usual themes, including death, mental health, remorse, and belonging. “I did my best to talk about an ongoing struggle to find purpose and place both internally and externally,” Kyttenjanae writes about the game. To this end, it’s a multi-part journey, with each leg taking you through different abstract structures—houses, lakes, and mountains—in what seems to be a desperate search for a place to call home.

What’s most striking about it is the desperation at the heart of the game’s exploration. This is most obviously realized in your inability to control the camera. You’re at the every command of the camera as it slowly turns to face the way you point the character. And so, as you search out the environments, you’re forced to do so in a painstakingly decelerated manner. It brings an appropriate sense of stress to the whole ordeal as your searching gaze can never keep up with your desire.

This desperation manifests in other, more authored ways, too. At one point you have to almost break the game by running over its steep barriers to progress to the next scene. If you don’t fight your way over and beyond these walls then you’ll be trapped in a valley forever. Hopping over terrain in this way is an act of transgression in other videogames but here it emphasizes how your search for belonging requires breaking pre-established rules.

You also transfer between different avatars throughout the journey as if trying on different bodies to see if they fit. Your default model seems to be as a skeleton that begins by running through literal walls of texts that imply they’ve lost a lover and must pursue them. But a more fitting idea is that this skeleton has lost its flesh and skin, and its this missing body that it searches for. After all, without the meat upon its bones this skeleton lacks an identity, meaning it isn’t able to match itself with any of the other bodies (which all do have flesh) it meets along the way.

After riding a pill across a lake dotted with palm trees the skeleton eventually finds tranquility in a holy temple surrounded by golden statues and dancing skeletons. It’s here that it commits itself to the suicide that the game’s title alludes to. It’s an end that finds happiness only in the revelation that, perhaps, loneliness is the only partner for some.

You can find out more about Apoptosis and find links to download and play it on its website.