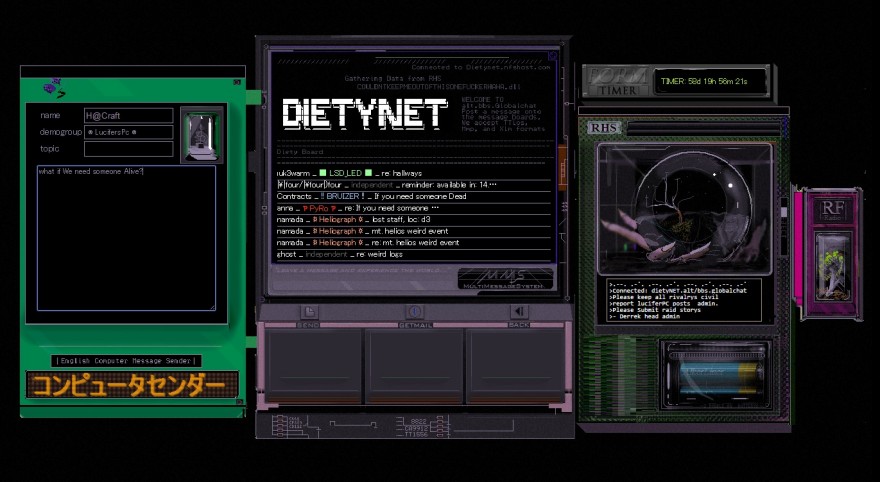 DeityNet is an Alt.BBS community. DeityNet is a Messaging program. It is only for the greatest cyberpunks, Demosceners, and Crack Gangs in the Deios Operating System. If you do not belong to one of those categories then you should stay out. Do not participate. Go away.

This is the warning that I must recite otherwise my service as part of the True_RED Demogroup would be retired. I’d probably be killed. Or maybe not. I don’t know, but I do fear the consequences that come with betraying my online peers. That much I’m certain about.

DeityNet came into my life when its creator Barch confronted me with it. He issued the warning you read above, the one that I had to give, and then linked the website. The only difference between his welcome and my own was that he added, “I hope you enjoy your stay at DeityNet.” I’m not sure if I can honestly hope that for anyone. For if you find pleasure there you, too, will be locked into its strict cyberpunk regulations.

You may know Barch. He’s the creator of the glitchventure Deios, of which DeityNet seems to be of the same universe. Despite DeityNet being text-based—an online messaging service—it has been dressed up by Barch’s distinct interest in the opulence of noise art and subdued cyber chromatics. It’s a treasure just to look at the thing.

When you first open up DeityNet it’ll take you a minute or two to adjust to the rich bandwidth of information its interface purports to serve you. Everything looks interactive but it is not. There are sleek grey buttons with glow-lit trimmings, and fonts so bold that they could introduce the kings and queens of outer space. On the right side is a curious image: it seems to be a crystal ball nestled in witchy fingers, daggers for nails. And inside that ball is a crooked tree hanging over what is perhaps an empty highway, and certainly a black-lit canopy hole-punched by stars above its branches.

The interface also has numbered circuitry exposed on its panels, a lone battery sits in a transparent case, and a pink offshoot houses a device called “RF Radio.” There’s also a timer that seems to be counting down from a 60-day starting point; a second ticking by at a time towards its nameless destination. None of it makes much sense but it is all compelling. You get the same experience upon first diving into the messaging system itself. Press the “GETMAIL” button at the bottom and you’ll receive a message. The symbols in the dirty-gold LED display at the bottom left transform into the word “RECEIVING,” and up pops your first message with a multicolored subject line.

Opening it up and reading the contents will probably feel like walking into a boardroom and accidentally interrupting a meeting at its middle. It’s hard to parse the discussion. In my first three messages, I had someone telling me to “Lightstorm” them, another questioning whether they’d get caught for an act they assumed I was familiar with, and the third was instructions on how to use medical equipment from another world delivered as if I’d asked for it in a hurry. It was perplexing, sure, but it felt like I was sneaking into a secret society, and the thrill of that notion is what led me further in.

Over time, as I read more and more messages, I started to make connections between the bizarre jargon. I still don’t know what this world of cyberpunkers and demosceners is specifically about, and it doesn’t matter too much; the idea is to get a feel for it, the language and the attitude, and then contribute yourself. You do this by writing messages in the space provided for composing them on the left, and sending them off to … whoever. This is how you become accepted into this universe. It’s a form of role-playing in which you can’t see who you’re playing with as communication between you is deliberately limited.

DeityNet reminded me of another program, Space Email, so I asked Barch if it worked anything like it. That is, a way for people to communicate anonymously by sending messages into a database, which are then regurgitated to other users when they ask to receive mail. “It works similar to Space Email but it is factional, based in another CyberWorld away from SpaceEmail – the Deios World,” he replied.

He also attached the Faction guide (above), which I had already received through DeityNet‘s messaging system, and said, “All users impersonating the wrong faction/user will be deleted from the BBS.” He then added, in a separate email, as if it were an afterthought, “All users are recommended to follow the Faction guide.”

I don’t think it’s possible to impersonate anyone in DeityNet as it all seems to be made in the mind, with the interface acting as stimuli. But these translucent rules and empty threats are what keep it all together; it’s all part of the show. What Barch has done is create the sense of a world behind all of the messages, one that you can pretend to slip into, interpreting the ambiguity as events and characters in the framework of this cyberpunk fiction. It seems appropriate that it is impossible to tell whether the messages are automated by machines or coming from other human players. This, of course, recalls the classic cyberpunk conceit dreamed up by author Phillip K. Dick—how can you discern an android from a human?

So, go ahead, answer the questions in the Faction guide, find out where you belong. And then send and receive messages to weave a story from the blank spaces, mixing in with the machines.

You can play DeityNet in your browser.