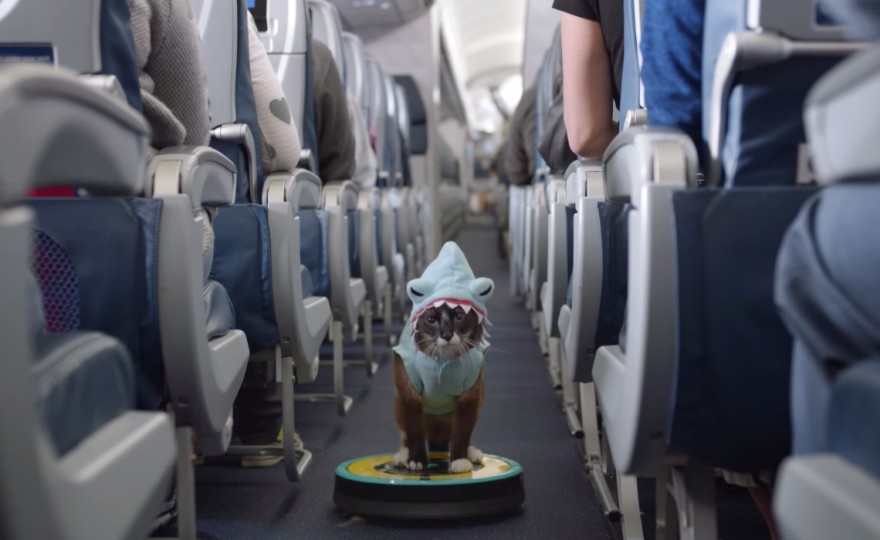 Memes are to our generation what boomboxes and Marty McFly’s red vest are to the ’80s. First, they become icons, encapsulating the pop culture of an entire era in just one image. Then they become camouflage for out of touch content-creators salivating over the coveted 18-29 demographic, as they cry, “IS THIS WHAT YOU WANT? ARE YOU NOT ENTERTAINED?!”

Delta Airlines’ “Internetest safety video on the Internet” at first seems like just another case of tone-deaf-company-itis. But, in reality, its much more insidious than that. Featuring everyone from the screaming Taylor Swift goat to doge himself, the “safety video” reads more like a six minute-long wink to the camera. Since irony is as much a part of the millennial meme-factory as perms were to the shoulder-pad generation, Delta’s video scoffs at itself even while participating in the very phenomenon it derides.

A disingenuous self-awareness underlies the whole thing, parodying a culture that already parodies itself—removing all substance from the words “humor,” “iconography,” and “safety video.” At the end of it, you can click on a host of different interactive “paths;” each a kind of after-credits sequence, where internet celebs appear to cause a glitch in the online matrix, resulting in the whole video imploding inside its own vacuum of meaninglessness.

Weirdly enough, Delta’s swing and miss safety video kind of mimics the issues GTA V experienced while attempting to satirize millennial culture. There’s an inherent grossness to sarcastically recreating a culture that is self-admittedly empty. The age of internet irony gives us so many layers of meta to hide behind that we hardly ever even have to admit we have genuine thoughts and feelings to one other. As Christy Wampole of The New York Times describes it, life in the age of memedom turns into a “clutter of kitsch objects, an endless series of sarcastic jokes and pop references, a competition to see who can care the least.”

“To live ironically is to hide in public”

“To live ironically is to hide in public,” Wampole concludes. “It is flagrantly indirect, a form of subterfuge, which means etymologically to ‘secretly flee’ (subter + fuge). Somehow, directness has become unbearable to us.”

But the most horrifying part of it all is that it worked. Delta succeeded. Force-feeding the internet that derisive, hollow, insincere sludge it uses for fuel, Delta managed to play us all like fiddles. The video has appeared on the likes of Slate and Huffington Post, just so the outlets could make fun of something that’s making fun of itself. I mean, its exactly what I’m doing right now—covering a story just to air my cynicism about it and the world we live in.

Listen, I’m no tinfoil-wearing, end of days truth teller who believes millennials are the worst generation to ever walk the planet. The current generation will always be the “worst” according to culture writers, and according to statistics, they’ll also always be slightly better off than the ones before. Youth culture necessarily seems unintelligible, at least in retrospect.

But, at the same time, as I watched the Delta video, I couldn’t help but feel a numbness spread throughout my body. Because this is how we will be remembered: as nonsensical fragments of insincerity. While girls in the ’80s at least genuinely thought the side ponytails was awesome, our generation can’t even muster the barest minimum of authenticity. Not even in our goddamn airplane safety videos.