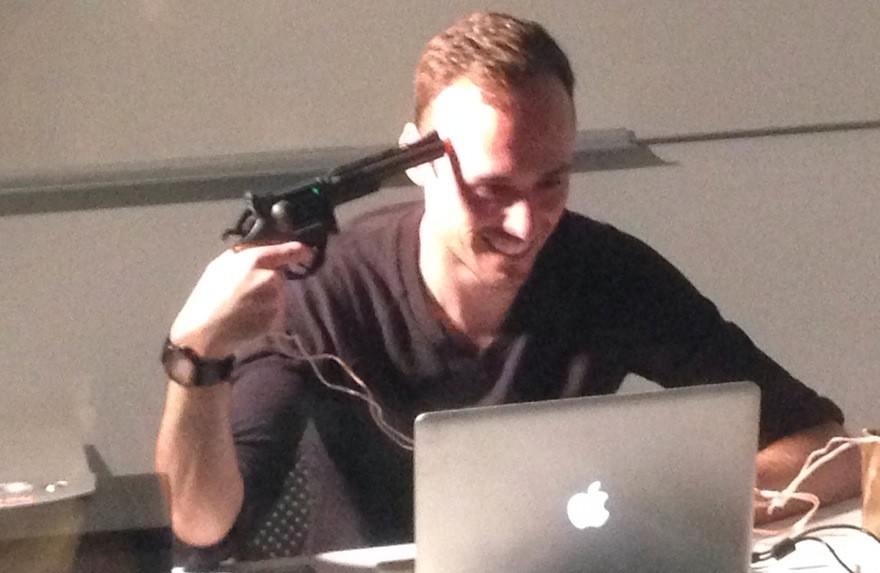 Update 10/31/14: Hey Reddit! You can read more about this project and the NYU MFA program here. If you like what you see, consider following us on Twitter or Feedly for more stories from the intersection of games, art, and culture.

Yesterday, we wrote up NYU Game Center’s student showcase, and one of the stars of the show was Lie to the Devil, a really cool, severely troubling game where a player sits down with a sinister MacBook that tries to con them into putting a bullet in their head.

No real bullets are involved, because that would be murder, but it nevertheless orchestrates a surreal, unnatural social experiment. I’d describe it as Videodrome meets the Milgram obedience experiment meets a chatterbox, one of those programs that simulate conversation—which is quantifiably nuts.

Despite the fact this is all obviously fictional, Lie to the Devil elicits a strong emotional response, teetering between real and imaginary. “People often feel guilty about the decisions they made while playing,” Jonathan Zungre, the game designer told me. “I had people coming out saying, ‘I feel terrible. I should have killed myself.’”

It’s all very theatrical. Here’s the setup: you enter a dark room and sit at a desk before a laptop while a crowd watches you through a large windowpane. Then, things get uncomfortably weird. First, the computer asks you: “Does the pain of others make you feel good or bad?”

Next, you create an avatar, and a cute little pet. Then, the computer tries to talk you into putting a revolver to your head, in effect holding your virtual creations ransom. The object is to win by deceiving the computer. Revealing how to do that would be a spoiler, but if you win you get to unwrap a present with a bow.

There is obviously no physical threat of harm here, hence the cords dangling from the plastic gun in the briefcase, but most everyone takes the game dead seriously, which is fascinating. “The fact that the game attracts a crowd of onlookers gives it this element of accountability,” Zungre says. “Players will very often go through everything the AI asks, because they’re being watched by other people.”

If you’d like to see if a demented AI can convince you to kill yourself (and, really who wouldn’t?), Zungre is planning an invitation-only showing in a few weeks. If you’re in the New York City area, you can hit him up on Twitter at @Zungz to get on the list.