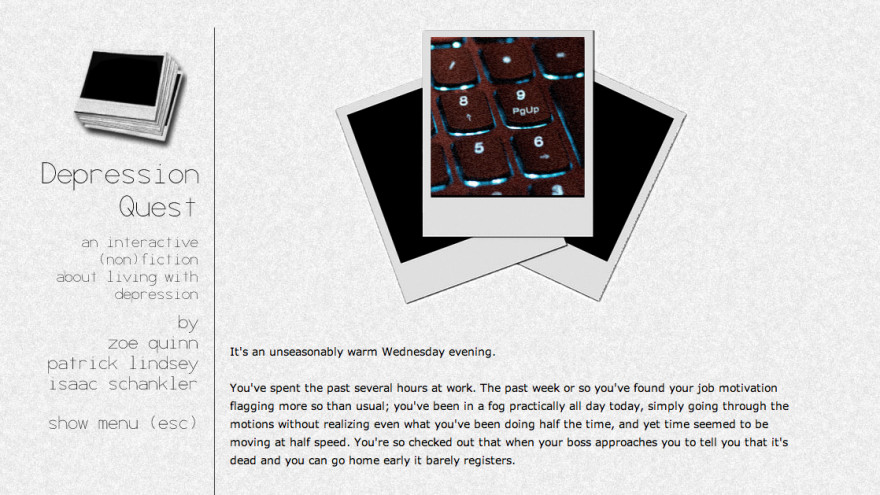 “Literally minutes after we got the notification, beloved actor Robin Williams was found dead from a suspected suicide after a long struggle with depression,” Depression Quest co-creator Zoe Quinn writes on her blog. “We were all ready to hit the big red button the minute that the news broke.”

This unexpected event caused a dilemma for the three-person team behind Depression Quest. On one hand, they had a game that offers insight into the question on many peoples’ minds: How could someone who brought so much joy to the world have potentially taken his own life? At the same time, there was a genuine concern that by releasing the game on Steam at that moment they’d be perceived as trying to capitalize on the tragedy due to its conjunctive topic.

After some deliberation, Depression Quest was released on Steam for free, as intended.

“I feel like I have a responsibility to those who could be helped.”

“I get regular emails from therapists who use it with their patients and families of depression sufferers to build a dialog and a bridge to understanding,” Zoe writes. “It’s been used in classroom settings, people have played it with their parents and significant others to start showing them things they had a hard time verbalizing.”

It’s Depression Quest‘s function, not as a game, but as a tool in helping people to understand depression, to explain it, and for those with it to realize they’re not the only ones suffering like that; that pushed the team towards releasing the game on Steam. Making it readily available in as many places as possible for people to find and engage with it as a beneficial aid is too important to its creators to let a false perception get in the way: “I feel like I have a responsibility to those who could be helped.” As Zoe writes, windows of opportunity for depression sufferers to help themselves are rare, so she’d rather risk offending some people than deny this chance to those who might need it.

I know of many people that Depression Quest has assisted in their awareness of and grasp over the condition since it was initially released on Valentine’s Day in 2013. Many of them spoke up to tell Zoe that releasing the game was the right thing to do yesterday, reminding her of how it has benefited them. I wasn’t one of them as I was asleep at the time, but I wouldn’t have been able to repeat the sentiment in quite the same way.

When I originally played the game last year I couldn’t finish it as it brought back the terrible feelings of futility and the lethargy that I had just clawed away from. After two years of depression it felt like it was only pushing me back into the hole. I guess that says something about the accuracy of the game, at least. The way that all of your choices at each intersection in the game are shown, but those that your level of depression denies you are crossed out, had a particularly big impact on me at the time.

My mistake was probably in playing it from my own perspective. Every choice I made seemed to take me down and reminded me of exactly what I had recently been through—breaking up with my girlfriend, losing friends, hating work and losing my job, sitting numb at a computer while avoiding sleep. It felt like putting back on the weights I had just lifted off.

Out of curiousity, I had another go at playing Depression Quest this morning, and was able to finish it. Once again, I made the choices I would make if actually faced with them, and was quite delighted to find that, while I still had depression by the end of the game (it never truly goes away), I was happy with the current state of things. It’s how I feel in my life right now, and my progress in that year and a half shows in that result.

the world is a better place with you in it.

So, while I recommend Depression Quest to all of those with depression, as it certainly can help, if you find that you feel like I did it about it initially, it may be a better idea to play Lovely Planet or the newly-released Hohokum, or listen to Boards of Canada (that always helped me), or maybe just go for a walk if you can manage it. Better yet, talk with people about it that you feel comfortable with doing so. If there isn’t anybody around, you can always call one of the numbers below and find someone to talk with. While it may never entirely leave you, there’s no reason for you to have to suffer depression in silence. Please try to pull yourself out of it rather than sink even further; the world is a better place with you in it.

Now, while Depression Quest is free to download on Steam, there are pay-what-you-want versions available on the official website and itch.io. If you want to support the creators of the game then you can do so by purchasing it there. It should be noted that a portion of this money is donated to the charity iFred, which aims to fight against depression as well as the stigma surrounding it. Also linked at the end of Depression Quest is the donation page for the National Suicide Prevention Helpline.

If you’re not in the U.S., you may find your national suicide crisis lines here.