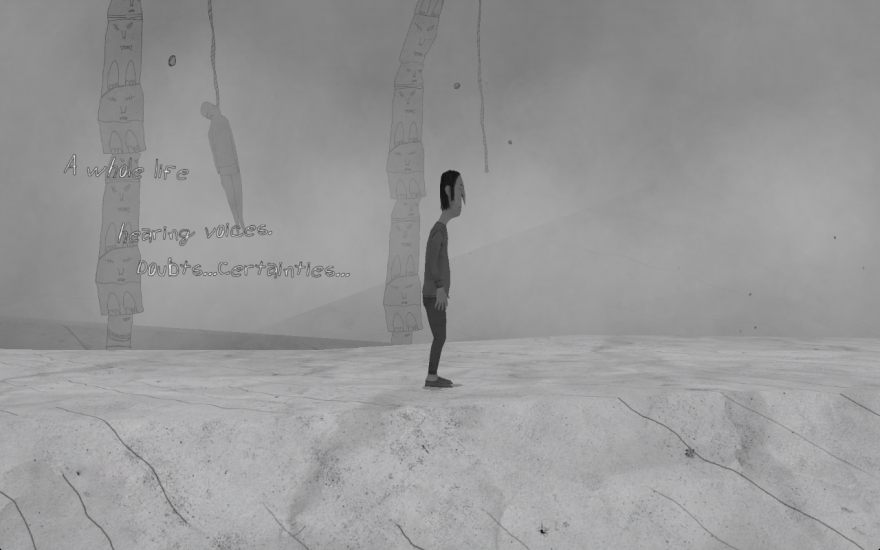 The brain had its own food on which it battened, and the imagination, made grotesque by terror, twisted and distorted as a living thing by pain, danced like some foul puppet on a stand and grinned through moving masks.”
? Oscar Wilde, The Picture of Dorian Gray

Guilt is a complex emotion that reveals much more than just one person’s inward state. On a philosophical level, guilt can only exist within a social context: as a response to breaching the moral ground rules that function like a civilization’s crowd control. But, on the other hand, guilt lives inside you—manifesting as a lead weight quietly eating away at your innards. Or, at its most extreme, a personal hell invisible to others that you cannot escape.

The experience of guilt is both shared yet individual, invisible but also painfully tangible. In The Guilt and the Shadow, a life lived in guilt is represented by a road that you travel down alone, which permeates with the unmistakable sensation of being watched. Fear looms over every corner, yet no actually threat ever really manifests physically.

Originating as a collaboration between Brazilian developer Frederico Machuca and his artist friend Luiz Rodolfo Annes, the first prototype of The Guilt and the Shadow based its narrative off one of Luiz’s short stories. “Personally, I always had an interest in the intense moments of life when people reach their limits,” Frederico says. So they chose the story of a man who, racked with guilt and a need redemption after killing someone, seeks to become a hero.

The tragedy of a mind which can’t escape a horror it helped create.

Though the themes of guilt and murder remain in the version of the game released today, the circumstances of the incident shifted dramatically, and with it the context of the protagonist’s guilt. The game reads like an intimate tale about coping with both mental and physical illness: the tragedy of a mind which can’t escape a horror it helped create.

Narratively, The Guilt and the Shadow recalls the subtly of Silent Hill 2. As you journey across the environments that embody different facets of the protagonist”s internal torture, you gain a sense of understanding without ever actually receiving any certain answers. By solving symbolic puzzles, you gather only tidbits of the story: of how a loved one’s disease lead one man to do things he never thought he was capable of. Like Silent Hill 2, the symbolic nature of the game world delivers more of the story than dialogue or cutscenes. “We wanted to make sure that any new feature, object, or environment we added to the game consistently relayed more of the story,” Frederico says. “Eyes are everywhere, always watching the player, suggesting that maybe the character feels watched in real life too.”

Each time the player collects a pill bottle in the game, a black screen jars them out of the imagined hellscapes of the protagonist’s nightmare, and into a grim, claustrophobic reality. The fixed camera angle focuses on a spinning fan inside a room, as the avatar relays fears, state of mind, hallucinations. Though the game never actually says the words, players come to the realization on their own time: he’s in a psychiatric ward.

Voices follow you throughout the nightmarish hellscapes, manifesting as fragmentary sentences that float rhythmically across the screen. The author of the voice changes, however, alternating between the defensive protagonist and an intimate accuser. The accuser knows him—knows you, and what you did. Your avatars slow steps seem to almost grow heavier, as the voice reminds him of his weaknesses, and the leaded guilt becomes more burdensome with each word.

Since 80% of the textures from the game were hand-drawn by Luiz himself, The Guilt and the Shadow establishes a personal atmosphere, providing the perfect setting to explore the grotesque self-induced torture the protagonist must live through. Though solving some of the puzzles can feel unnecessarily laborious, the mechanics for each resonate with the narrative themes. Like the guilt itself, each obstacle is an amorphous shadow: like uncertainty has taken physical form, destroying you from the inside out.