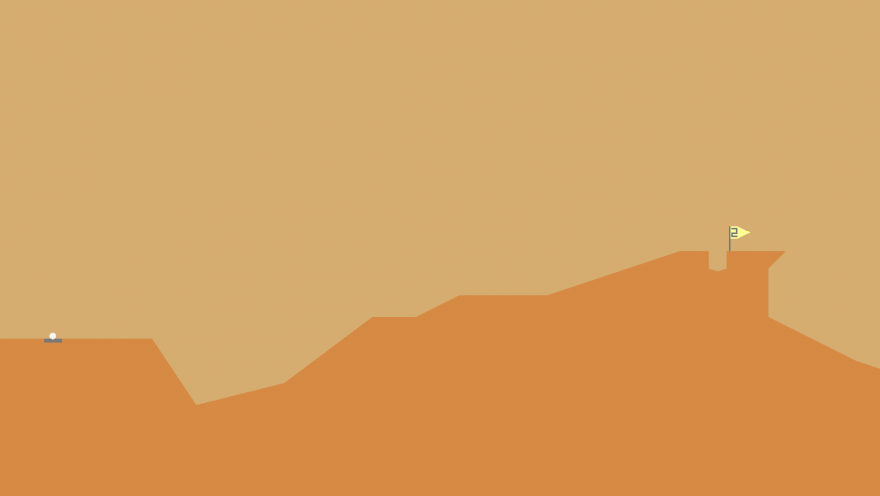 He was describing the anti-fashion demeanor that has become known as “normcore.” Downtown trendsetters had adopted the bland but comfortable camouflage of the middle-aged apathetic—unbranded turtleneck pullovers flopping over stonewashed denim jeans, topped by the plainest baseball cap a souvenir-stand has to offer.

“I feel that I have mastered difference, and now I want to master sameness.”

Normcore is, as Lewis put it, an effort to be “exhaustingly plain” in order to absolve oneself from fashion. The motive behind those opting for this undistinguished style out of choice (it doesn’t work for everyone), rather than standing out, has been read as a statement against the fashion world’s oversaturation. It’s this that the tawny colored, straight-forward golf courses of the mobile game Desert Golfing has in common with normcore.

It was the game’s creator Justin Smith that first made the comparison. “It’s my most normcore game yet,” he said in an off-hand tweet. Joke or not, the sentiment rings true: Desert Golfing involves only flicking a golf ball across a small course and into a hole. There’s no surprises or deeper meaning; it’s unpretentious, “minimalist without being minimalist,” Smith suggests.

What makes the normcore label work for Desert Golfing in particular is that it’s a game by Justin Smith. The creator of the absurdly fun “ in a ” Enviro-bear 2010, and deliberately slippy No Brakes Valet, has consciously made something entirely underwhelming.

“People expect my games to be a little strange, and to have subversive control schemes,” Smith told me. “I had to give the normcore disclaimer in my tweet so that people wouldn’t be surprised that Desert Golfing was a little more mainstream. This is my post-aspirational game. It’s not trying to be anything. It’s a game like every other game. I feel that I have mastered difference, and now I want to master sameness.”

The golf game genre seemed to be the appropriate target for this new goal of Smith’s. As he described it, golf games tend to fall into one of two categories: realistic and “wacky.” Avoiding both of these extremes, he thinks he’s found something pure and “unassuming” in between.

Seeking purity in design isn’t unique to normcore sensibilities—in fact, on the App Store there are many games not at all dissimilar to Desert Golfing thriving on there. Mobile gaming’s touchscreen controls and file size limitations favor simplicity over the typically more complex aspirations of console and PC games. So, aren’t all of these other mobile games normcore, too?

“The trouble with that notion is that there are thousands of back-to-roots arcade games on mobile. If it’s a conscious choice to eschew being different, then you could call it normcore,” Smith tells me.

The problem emerging here is that defining normcore by creator intent makes it hard to distinguish from what is just normal. It hardly matters, anyway. Normcore doesn’t care for being recognized; it is, after all, an effort to blend in with the noise. “I’m not trying to stand out on the App Store. Standing out is no longer a path to success.”

Smith’s choice is somewhat of a subversive act at a time when everywhere you look there are people pushing the need to “stand out” on the App Store. This piece of advice is passed around like a golden ticket despite Flappy Bird‘s single-handed dismantling of the notion. When everyone’s trying to get noticed the futility of the goal seems enormous, croaking out a racket of profiteering and metrics-driven game design.

“Even though the App Store has become a swirling gyre of garbage, it’s starting to feel comfortable and familiar. There’s a sense of freedom to dive in and be a part of the gyre, rather than worry about striving to an ever more unattainable individuality.”

Perhaps Smith is only reacting soberly to this overwhelming situation, then. As with the fashionistas taking their cues from the black mock turtleneck and blue jeans of Steve Jobs, he’s able to find a lost pleasure among the recesses of a multi-billion dollar cesspool.

If nothing else, he seems to have achieved a level of refinement along those lines: “I no longer feel a loss of dignity for being a part of the App Store masses.”

You can purchase Desert Golfing for $.99 on the App Store and Google Play.