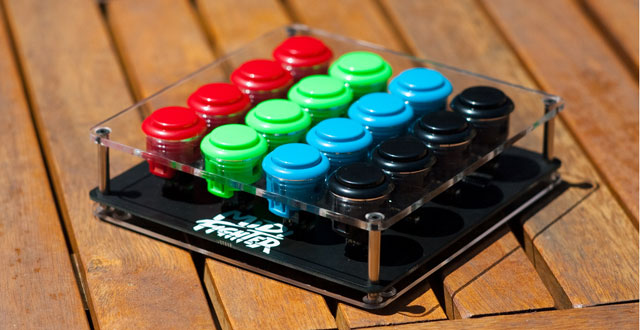 Perhaps I was a bit harsh in my last column. Being honest with you: I look around my lounge, and I see lots of controllers that are readable, specific, and make their affordances very clear.

To start with, there are a great deal of plastic, miniaturized musical instruments lying around. The most mainstream example of the thoughtful interaction design I clamored for last month is in the rhythm-action controllers cluttering up living rooms around the world: from the recognizable guitars and drum kits of Rock Band to the chunky buttons of Pop’n Music.

The genre may be waning; whether that wane is due to over-saturation or ennui is irrelevant. What’s important are the lessons that gamers are left with: a newfound sense of rhythm (perhaps), a newfound love for the classic rock sounds of Boston (almost certainly), and a newfound appreciation of the subtleties of controller design (for certain).

For these controllers make the direct link between player action and in-game reaction more obvious than any abstract pad or keyboard, and because of that, players have learned how to criticize their input devices. Who hasn’t picked up a Rock Band Stratocaster to realize how much they miss the positive report of the PlayStation 2 guitars’ buttons, the decisive click of the microswitches in the old strum bar? It’s a response that might seem fickle or nerdy, but is in fact the only appropriate one from a player that’s truly understood the affordances the game they play demands. That understanding allows players to make choices and demands of the hardware they use—and to begin to understand the compromises and decisions that game and hardware designers have to make all the time.

Having understood their game of choice, these players have now begun to come to an understanding of the hardware they require to interact with it, and that personal understanding is manifested in the stick they have constructed.

On the shelf above my TV, just above the DJ Hero turntable, is the other controller in my flat that obviously contradicts my last column: my Hori EX2 arcade stick. I’ve used it for a great many games: platform games like Super Meat Boy and N+ that demand precision, top-down XBLA shooters—but I bought it specifically for fighting games.

The first lesson learned in the church of fighters is: the modern “default” pad that came with your console is almost certainly unsuitable for playing a fighter at any degree of skill. Quickly, the wobbly d-pad and lack of face buttons become an obstacle, and it’s time to trade up.

The improving player is then faced with the many controllers designed for fighting games on the market—from the six-button, Saturn-styled joypads, to the dedicated arcade sticks. And many will be entirely happy with these off-the-shelf products.

But there’s also a sizable homebrew community building its own sticks: replacing components in old Dreamcast Arcade Sticks to make them compatible with more modern systems; stripping out consumer-grade controls from their Horis and replacing them with arcade-grade hardware; some building entire sticks from the ground up. Lines begin to be drawn along taste, players siding with component manufacturers that suit their taste, be it the Japanese firms Sanwa and Seimetsu, or American manufacturer Happ. Having understood their game of choice, these players have now begun to come to an understanding of the hardware they require to interact with it, and that personal understanding is manifested in the stick they have constructed. And in that hardware, the personal touches remain—button layouts tailored to individual hand positions, sticks chosen dependent on preferred left-hand grips.

Sanwa buttons are widely regarded to be the best arcade buttons in the world; designed for a life where they might see hundreds of thousands of actuations, and where they have to be as precise and responsive at the end of that lifespan as at the beginning. Their reputation for indestructibility precedes them; no wonder that they have begun to be embraced by those outside gaming.

Returning to music again, it’s striking to note how the computer DJ community has seized upon them. Controllerism—DJ software controlled with dedicated electronic hardware—is on the rise, and precision of input is a high priority for DJs inventing crazy, complex routines of stuttering beats and loops.

One day, DJ Ean Golden decided to replace the buttons in his Vestax controller with a set of Sanwa arcade buttons, and a trend was born. Golden explains the appeal:

Existing buttons were giving me carpal tunnel from playing them in a rapid, musical manner so I looked for alternatives. Arcade buttons seemed like the most logical choice; fast, durable, smooth, and built to be wailed on. The spring-loaded element provided an unexpected benefit too—making it easier to play rapid phrases and note combos.

Robust enough for the rowdiest club, responsive enough for the tightest rhythm; it’s no wonder musicians on the boundaries of performance have taken to the humble arcade button. By pushing DJing beyond what vinyl alone can do, controllerism has become a culture that’s all about the button; no wonder it’s appropriated the interfaces of the games that so many of its devotees grew up with.

In my previous column I suggested that the mark of a good button was that it was readable, responded positively to action, and made its affordances clear. The dedicated controllers, of the kinds designed above, meet all these requirements. And they’re exactly the kind of controller that Don Norman would have approved of—nothing like the rows and rows of identical-looking switches that made him so cross. And yet: I can’t help but feel they’re a dead end, unexplored by so many gamers, gathering dust in so many other homes.

What’s perhaps most important, then, is the lessons that the brief experience of a plastic electric guitar teaches: the way gamers become educated to the expectations and demands of interfaces. Even if players, ultimately, happily return to their DualShocks, they return with a much deeper, more tactile understanding of the relationship between player and button.

The Game Design of Everyday Things is a recurring column that looks at how game design and game objects have connections and antecedents everywhere you look. Tom Armitage is a game designer at Hide & Seek and can be found at infovore.org. Photograph by benjibuls